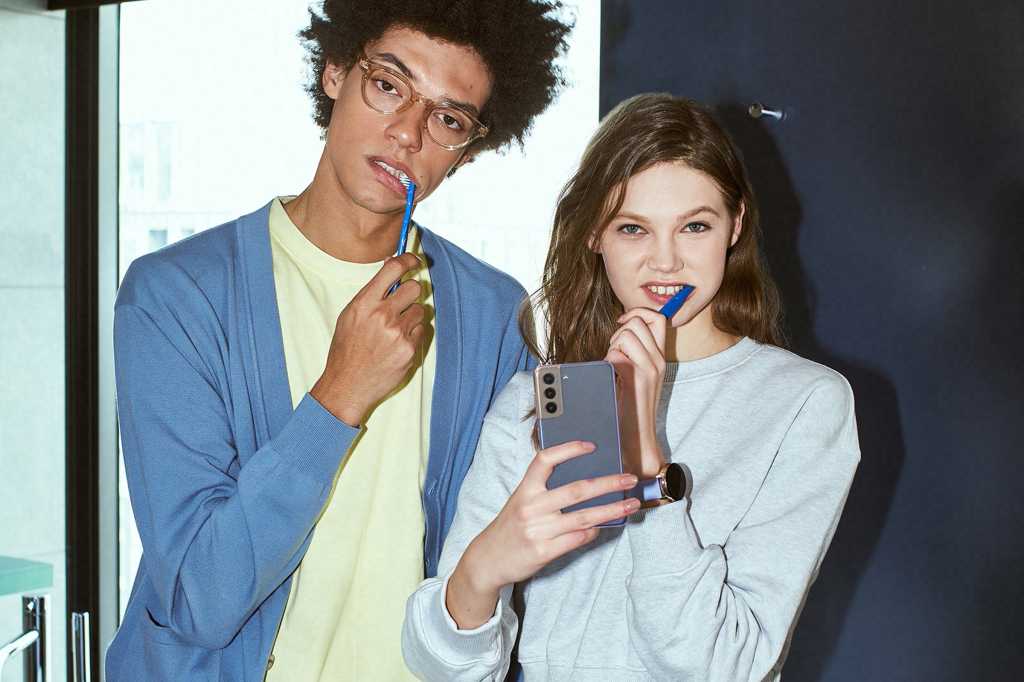 Samsung’s Galaxy S21 is easily its best flagship bargain in years, with the latest flagship Snapdragon processor, a powerful triple-camera array, and a premium look and feel. But if you’re thinking it’s just an updated version of the S20 or even a smaller version of the new Galaxy S21+, there are a few things you need to know before you plunk down $800 to preorder.

Galaxy S buyers are used to getting the very best screens around. The Galaxy S20 brought a 6.2-inch Quad HD+ 3200×1440 Infinity-O Edge display with a pixel density of 563ppi and a 120Hz refresh rate. While the size is the same, you’re not getting all that with the new Galaxy S21. Rather, you’re getting a flat Full HD+ 2400×1080 Infinity-O display with a 421ppi pixel density and an adaptive 120Hz refresh rate. That’s still an excellent display, of course, but it’s definitely a step down from what Galaxy S buyers are accustomed to getting.

The back is made of plastic

Ever since the Galaxy S6, Samsung Galaxy S phones have been made entirely out of glass, and if you’re buying a Galaxy S21+ or S21 Ultra, that’s what you’re getting. But with the S21, you’re getting plastic—er, make that a “specially reinforced polycarbonate material.” That’s not necessarily a bad thing—plastic is less prone to shattering when dropped—but keep in mind that the S21 is just a little less premium this year.

After first bringing it to the Note 20 Ultra for quick file sharing, Samsung is going all in on ultra wide band. Alongside the Galaxy S21, Samsung launch a new line of SmartTags that work with the UWB chip to precisely locate lost objects. But if you get the S21, you won’t be able to take advantage of it—only the S21+ or S21 Ultra have the UWB chip.

It has less RAM than its predecessor

When Samsung launched the Galaxy S20 line, it was a performance beast, with a whopping 12GB of RAM standard across all three phones. Granted you might not have needed all that memory, but if there’s anything we’ve learned from Samsung phones it’s that they tend to get bogged down over time, so the extra RAM will definitely help keep things running smoothly. But on the Galaxy S21, you’re only getting 8GB with no option for 12GB.

It might seem like only yesterday when Wi-Fi 6 arrived, but the next generation is already here. Wi-Fi 6E offers faster speeds and higher capacity to reduce latency and bottlenecks, and the Galaxy S21 phones are among the first to feature what is soon to be ubiquitous. But like UWB, it’s only available on the S21 Ultra. The S21 sticks to basic Wi-Fi 6.

It doesn’t have a microSD storage slot

Samsung Galaxy S users have never really had to worry about how much storage is inside their phone thanks to the addition of a microSD memory card slot in the SIM tray. It’s been a staple of the Galaxy S since the first phone landed in 2010, but the Galaxy S21 doesn’t have one. So if you’re buying one, you might want to upgrade to the 256GB model.

It doesn’t support the S Pen

The Samsung S Pen has always been the thing that separates the Galaxy Note from the Galaxy S, so it’s a big deal that the Galaxy S21 lineup supports Samsung’s stylus, even if it’s just for drawing and writing. But don’t expect to break out your S Pen on the vanilla Galaxy S21. Samsung has limited stylus support to the S21 Ultra, so you’ll be tapping away with your finger like usual.