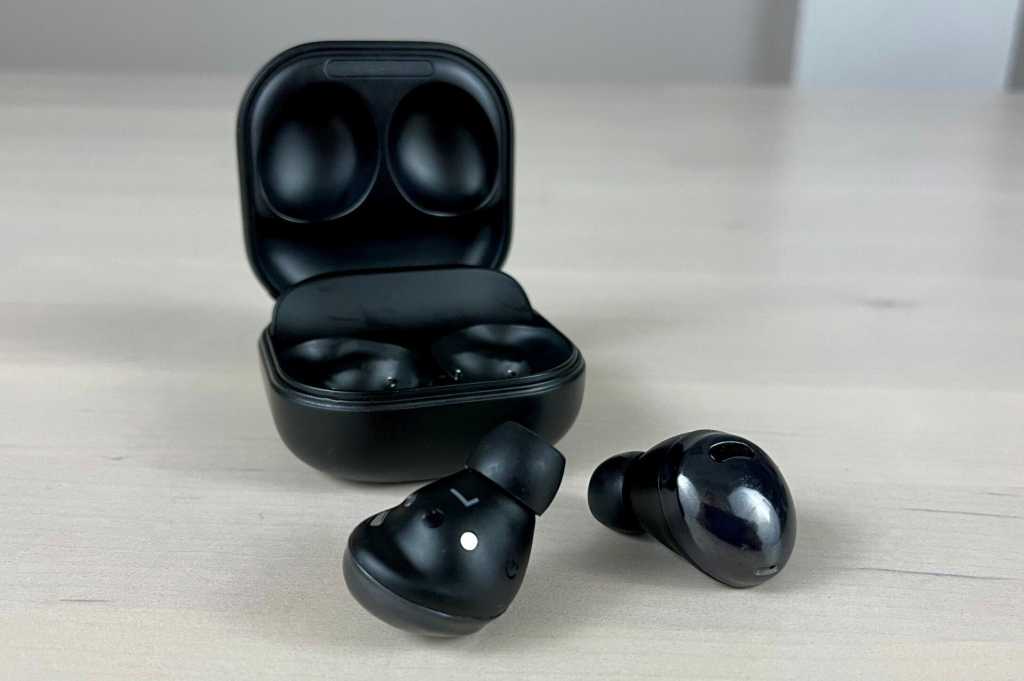 Samsung just unleashed its first premium pair of earbuds, the Galaxy Buds Pro, and they come brimming with features such as improved water resistance, spatial 3D audio, adjustable active noise cancellation, a four-step ambient noise mode, and the ability to dial down the ANC and up the ambient sound when you start talking.

We’ll have a full review of the Galaxy Buds Pro once our review takes them for a thorough test drive, but I couldn’t resist cracking the box and taking them for a quick spin. Read on for my first impressions.

Inside the box you’ll find the Galaxy Buds Pro sitting in their charging case (roughly an inch thicks, and two ounces with the earbuds inside), along with a USB-C to USB-A charging cable and three eartips—small, medium, and large—in addition to the tips that are already on the buds.

The Buds Pro come in three colors: phantom violet, phantom black (the color of our review unit), and phantom silver. Gone is the bean shape of the Samsung Galaxy Buds Live; instead, we’re talking more of a compact, traditional shape with a glossy finish, akin to the Galaxy Buds Plus. The buds fit snugly in my ears, protruding out only slightly, and I never feared they were about to pop out.

One of the biggest design changes for the Galaxy Buds Pro isn’t visible to the naked eye: It’s much more resistant to water than previous Galaxy Buds. While the Galaxy Buds Plus and Buds Live have an IPX2 rating, meaning they’re only resistant to water than hits them at a 15-degree angle or less, the Buds Pro boast an IPX7 rating, which means they can be submerged in a meter of water for up to 30 minutes. In other words, you could probably get away with wearing the Buds Pro in a car wash, not that doing so would be a great idea.

Once I paired the Galaxy Buds Pro with a Samsung Galaxy Note 20 (the process took less than a minute, and went without a hitch), I fired up the Samsung Wearables app to take the buds’ ANC feature for a test drive.

Samsung says the Buds Pro can screen out up to 99 percent of background noise, and in my preliminary tests the buds did an impressive job of quieting the low rumble of my dishwasher and the whir of a floor fan. I could, however, still hear higher-range sounds, such as the clickity-clack of my mechanical keyboard and voices from my daughter’s remote learning class. It’s not unusual for noise-cancelling earbuds to mainly block low-frequency sounds, but still, it’s worth noting.

The Buds Pro also has “high” and “low” ANC settings, with the “low” setting recommended for quieter environments where you don’t need the full—and sometimes too-full—noise cancelling effect. I didn’t notice much of a difference between the “high” and “low” ANC settings, but those who get an uncomfortably clogged-up feeling from noise-cancelling earbuds might appreciate the option.

Besides screening out ambient noise, the Galaxy Buds Pro can also let it in when you’d rather keep an ear on your surroundings, similar to “transparency mode” on the AirPods Pro. You can toggle between ANC and the ambient sound mode by tapping and holding one of the buds.

What sets the Buds Pro’s ambient noise setting apart is that it offers four steps, for a boost of up to 20dB. Enabling the ambient noise feature does, indeed, make the Buds Pro’s audio feel much more open to the environment, handy for when I was waiting for FedEx to ring my doorbell or (eventually) when I venture back onto the New York City subway.

Working hand-in-hand with the Buds Pro’s ambient noise mode is a clever “voice detect” feature that automatically turns off active-noise cancellation, turns down your music, and cranks up the ambient noise whenever it hears your voice.

Being able to slide into conversations while wearing the Buds Pro without having to lift a finger was refreshingly liberating, and after I was done talking, the ANC and my tunes would ramp back up within about 10 seconds. That said, voice detect does take a second or so to kick in after you start talking, and it will only turn on once you talk, not someone else.

Another nifty new feature for the Galaxy Buds Pro (and, again, one that Apple’s AirPods had first) is a “find my buds” feature.

Similar to Apple’s “Find My” app, SmartThings Find puts your supported devices, including the Galaxy Buds Pro, on a map, and you can tap a button to make the buds emit a quiet chirp that gradually grows louder. If the Buds Pro aren’t connected to Bluetooth, SmartThings Find will report their last known location.

We’ll save the details on the Galaxy Buds Pro’s audio quality for our full review, but to my (untrained) ears, the two-way speakers on the Buds Pro sounded pretty impressive. Teeing up the title track of Bruce Springsteen’s The Ghost of Tom Joad on Tidal (which I was able to stream losslessly, thanks to Samsung’s Scalable Codec), Bruce’s spare vocals sounded clean and crisp, and there was a nice warmth to the rising synthesizer, albeit with a somewhat narrow soundstage. Ciara’s “Level Up” popped without heading into too-boomy territory, while Carlos Kleiber’s legendary rendition of Beethoven’s Fifth delivered plenty of detail in the strings and horns.

The Buds Pro’s three mics and redesigned windshield chamber are designed to keep your call quality clear during windy conditions; unfortunately, the weather has been disappointingly calm during my brief testing period, but callers reported that my voice sounded loud and clear during some not-so-windy calls. Hopefully we can scare up some stronger breezes for our full review.

Looking to match Apple’s spatial audio on the AirPods Pro, Samsung’s Galaxy Buds Pro arrive with 360 Audio, a feature that simulates multichannel audio on the buds stereo drivers while also—with help from Dolby Head Tracking technology—making it sound like the audio is coming from the direction of your phone or tablet, even when you move your head.

It’s a cool-sounding feature and I can’t wait to try it, but alas, it will—for now, anyway—only work on Samsung’s latest Galaxy S21 handsets. A firmware update that will enable 360 Audio for the Galaxy Note20 (which Samsung let me borrow for testing purposes) and S20 should arrive “soon,” while plans for older Galaxy phones are up in the air.

Another feature that I wasn’t able to test drive was Samsung’s new Auto Switch feature, which will allow the Galaxy Buds Pro to bounce from a Galaxy tablet to a Galaxy phone and back again when you’re taking a call or otherwise multitasking. As with 360 Audio, Auto Switch will work at launch with Samsung’s latest Galaxy S21 phones, while the upcoming 360 Audio firmware update will also enable Auto Switch for Note20 and S20 models.

As I mentioned before, these are just first impressions of the Samsung Galaxy Buds Pro following a very brief period of testing. Keep your eyes peeled for an in-depth review.