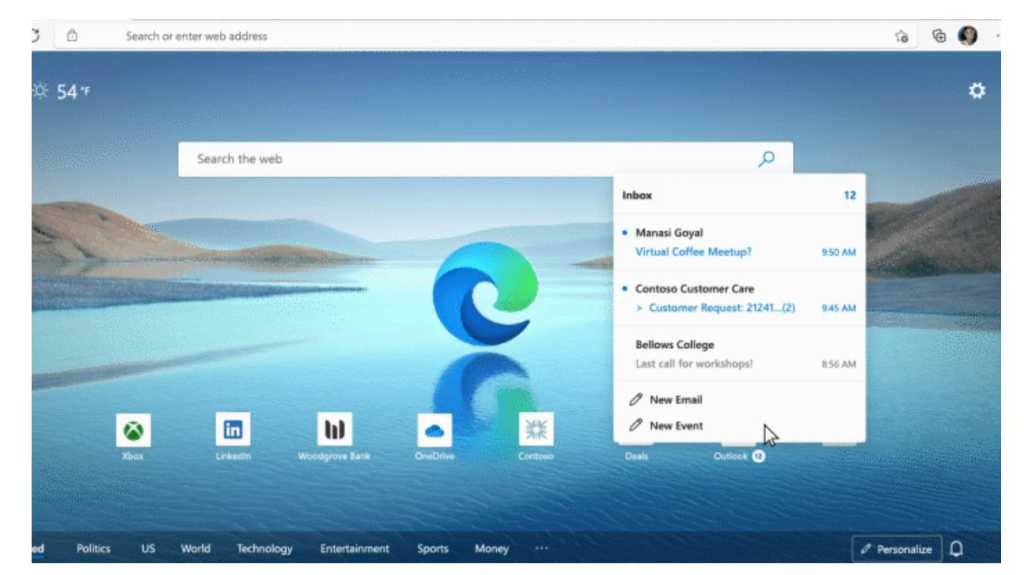 Microsoft’s latest version of its Edge browser, in conjunction with Microsoft Bing, are rolling out some intriguing new features as part of the latest Microsoft Edge version 88 update. The most unique: Edge will now show a few new emails when you open a new tab page.

Edge 88 offers some nifty new security features, such as the long-awaited password generator. The company has also added some useful personalization and productivity features, including what could be my favorite: the Edge sidebar search function, which is now generally available.

Here’s a list of the fun and productive features Microsoft is adding to Edge.

While browser sidebars aren’t unique to Edge at all, sidebar search has been thoughtfully integrated within Edge. Highlight a word, and right-click it to bring down the menu—then click Search in sidebar for the highlighted word or phrase. What’s great about sidebar search is that it can give you a quick definition or explanation of the term, without the need to open a new tab, and to return to what you were doing. Sidebar search is thus a great way to stay focused on the task at hand, while also seeking out new information.

The option to see new email is something Microsoft hasn’t offered before. This feature won’t show up automatically—you’ll need to perform a few quick steps to enable it. It also won’t show up immediately, either, as Microsoft said that it will roll out over the course of this month for Edge users.

Here’s how it works: When you launched Edge for the very first time, you were offered the option to configure the layout as “focused,” “inspirational,” or “informational”—basically tweaking the number of news and app tiles that Edge made available. (You can stlll make adjustments via the Edge menu, clicking the ellipsis icon in the upper right corner, dropping down to Settings, then opening the New tab page and adjusting the layout via the Customize button at the top.)

On the new tab page, you’ll need to click the plus sign beside your current quick links, Microsoft says, then click Outlook under the suggested apps. You’ll need to sign in to Microsoft Edge with the same account you use for Outlook to enable this feature, of course.

This new feature won’t open Outlook.com or the Mail app. Instead, it will show your three most recent emails as well as an option to compose a new email. It’s hard to say whether this particular feature will turn out to be popular, but Microsoft has made a habit of embedding related apps and functions where the company thinks you’ll find them useful, and this is just another example.

History and tab sync, and sleeping tabs too

When Microsoft launched Chromium-based Edge a year ago, there were a few small holes. For example, while favorites and settings synced, of course, Microsoft was slower to sync other parts of the browser. Finally, Microsoft has filled in the gaps: The two outstanding “tab history” and “open tabs” now sync between the Edge browsers you may have open.

Both are available to Edge users on the desktop and mobile, as long as you’re signed into a Microsoft account.

Microsoft is also improving the performance of your PC by minimizing the resources that idle tabs require. Once this new feature rolls out, you’ll be able to go into the Edge Settings menu (under the System heading) and turn on the “Sleeping tabs” option. “When you have several tabs open, it will release system resources for inactive tabs to help power new or existing tabs as well as other applications, preventing slowdowns and sluggishness,” Microsoft said.

If you haven’t learned how to personalize your PC, you really should—there’s a wealth of absolutely gorgeous background themes available. Last year, Microsoft began extending this to Edge, with some frankly awesome Xbox-related backgrounds for a new tab opened within Edge.

Now, there are 24 new Edge themes from which to choose, including Xbox themes from your favorite franchises: Halo, Gears, Forza, Microsoft Flight Simulator, Sea of Thieves, Grounded, Ori and the Will of the Wisps, and more.

“Of course, this is just the beginning,” William Devereux, senior program manager for Microsoft Edge, in a blog post. “We’ll continue growing our collection of themes, and in the coming months we’ll be adding support for anyone to submit their own themes. Soon, you’ll even be able to select a theme color directly from the Edge Settings as well.”

Recipe cards that get right to the good stuff

If you’ve begun cooking more at home, you may note that many recipes rattle off a personal anecdote or story, whether to add some personal flavor, or simply puff up the recipe page to gain influence on search engines. Some, however, at least let you jump straight to the recipe itself. Microsoft tries to go even further. If you search for a recipe on Bing, you’ll see a list of “cards” with the name of the recipe and a link to the site. Hover over them, however, and Microsoft will try to extract the recipe itself, or at least a list of ingredients and an estimated cooking time.

Cards for carousels and knowledge, too

You’ll see “cards” of information crop up more, both in “carousels” of related images that can be scrolled left and right, as well as redesigned knowledge cards that can appear as a sidebar.

These latter knowledge cards appear rather impressive, looking more like a throwback to the days of Microsoft’s Encarta encyclopedia rather than a dry recitation of facts. It will be interesting to see how quickly these new, visually interesting knowledge cards will roll out, and how broadly they’ll be applied.