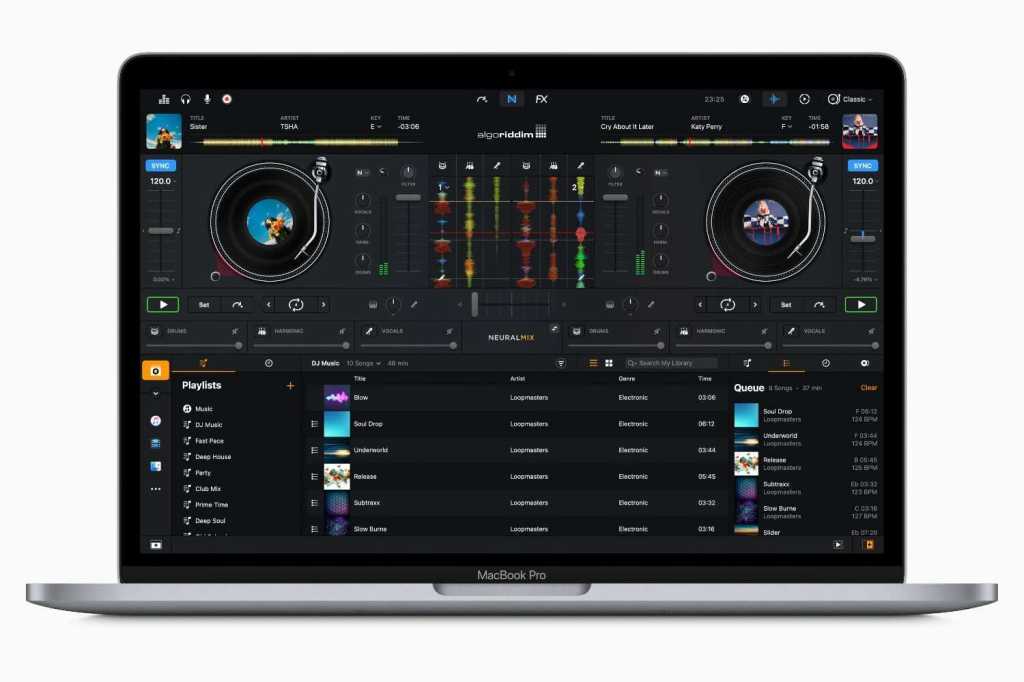 We’ve already tested AMD’s Ryzen 5000 mobile against Intel’s current Core i7 chips in laptops, and Ryzen easily wins. But what everyone really wants to know is how it stacks up against Apple’s impressive M1 silicon in the new MacBook Pro.

The M1 is a 5nm, TSMC-built chip based on the Arm architecture—a hard pivot by Apple after ending its 15-year relationship with Intel. Despite the performance hit of dealing with translating x86 instructions to Arm, when we tested the MacBook Pro M1 against Intel 10th-gen and 11th-gen CPUs and AMD’s Ryzen 4000, we were genuinely impressed.

Cribbing from all those performance results, we decided to compare benchmarks run by our sibling site, Macworld, as well as results from respected work station builder Puget Systems, to see just where the CPUs and laptops compare.

Sorry, but the new MacBook Air is not faster than 98% of PC laptops

Where is the Qualcomm Snapdragon that will challenge Apple M1 Macs?

For our previous comparisons we featured these laptops:

In addition to those  laptops, we also have:

Our last entry to list is the Ryzen 5000-packing laptop of the hour:

The Flow X13 does offer one thing the MacBook Pro doesn’t: external GPU support. In fact, it can’t be purchased without the custom-designed GeForce RTX 3080-based XG Mobile that’s connected using a proprietary x8 PCIe connection. We didn’t have access to an XG Mobile for our review, as it was stuck in customs.

We understand the sample set is diverse. We don’t really think anyone would put the five-pound Acer Predator Triton 500 in the same class as any of the three-pound laptops. The same goes for the even heavier (and more powerful) Gigabyte Aorus 17. We did want to include the results for reference, as some may wonder what you get if you’re willing to carry the extra pounds.

One final word before we get too far down the road: Jersey-wearing Mac fans may protest that putting AMD’s 35-watt Ryzen 9 5980HS up against the low-wattage M1 is simply unfair, especially considering the Asus ROG Flow X13 also features a GeForce GTX 1650 Max-Q GPU.

We agree that it’s not a traditional oranges-to-oranges comparison, but because the MacBook Pro M1 and the ROG Flow X13 basically weigh the same, a potential buyer would naturally see them as competitors.

We’ll kick this off with Maxon’s Cinebench R20, a popular test based on the Cinema4D 3D modelling and rendering application. The test is nearly CPU-bound, and it loves processor cores. It also tends to hit older Intel CPUs.

The leader of the pack is the Asus ROG Flow X13 and its Ryzen 9 5980HS chip, with the older Ryzen 4000-based laptops (Lenovo IdeaPad Slim 7 and Asus ROG Zephyrus G14) fairly close behind. Intel’s somewhat newer Core i7-10870H in the Gigabyte Aorus 17 actually does relatively well, but it has the advantage of the beefy cooling from the six-pound body.

The MacBook Pro M1 doesn’t look so hot and actually loses to the 11th-gen Core i7-1185G7 CPU in the MSI Prestige 14. But we’d be playing favorites if we didn’t mention that one huge disadvantage to the MacBook Pro is the use of Apple’s Rosetta 2 to handle translation of the x86 code to Arm. So, withhold judgement.

Cinebench R20 allows you to run using a single thread, so we did that with all of the laptops. To be honest, they’re mostly in the same ballpark, but the standouts are AMD’s new Ryzen 5000 in the Asus ROG Flow X13, and Intel’s 11th-gen Tiger lake chip in the MSI Prestige 14.

Maxon has updated Cinebench R20 to Cinebench R23, and among the new changes is a default stress test mode, which runs the system for a minimum of 10 minutes. The new version also offers native Apple M1 support.

But wait!—AMD is here to say hello to its cousin from TSMC. Both the U- and HS-series Ryzen 4000 chips (Lenovo IdeaPad Slim 7 and Asus ROG Zephyrus G14, respectively) outperform the M1, and the Ryzen 5000 in the Asus ROG Flow X13 really steps away with 58 percent more performance. Yes, its Ryzen 9 5980HS is a higher-wattage chip, but as we said before: Both are three-pound laptops you would consider to get “professional” work done on the road.

We also run Cinebench R23 on all of the laptops using a single thread. This helps remove the disparity of core counts and SMT and Hyper-Threading, as well as the size disparity among the laptops. What we get is a better feel for how each CPU would handle relatively heavy tasking using a single compute thread.

We’d again say they’re all in the same ballpark, but this time there’s a clear competition among Intel’s 11th-gen Tiger Lake (MSI Prestige 14), Apple’s M1 (MacBook Pro), and AMD’s Ryzen 5000 (Asus ROG Flow X13). None of the laptops shown here are slow, but the snappiest of them will likely be based on those three families.

We next ran Chaosgroup’s V-Ray Next renderer on the laptops. The same caveats from above apply, that the M1 is handcuffed when dealing with non-native code. But as we saw from Cinebench R23, that won’t help it against the Ryzen chips.

Few people actually do 3D rendering—even if their laptop is capable of it—so looking for a more useful metric that far more people use, we used Puget System’s Pugetbench for Adobe Premiere to measure the performance of the Windows laptops, and compared that to results that Puget System itself derived for the MacBook Pro M1.

Adobe Premiere taps both the CPU and GPU depending on how you use it. Pugetbench uses both to determine its overall score. Laptops with big, fat GPUs obviously do better here, but the CPU matters too. With its GeForce GTX 1650 Max-Q, the Ryzen 5000 has the lead, but only when set to its higher-performance Turbo setting.

All of the laptops with integrated graphics, including the 10th-gen Core i7-1185G7 (MSI Prestige 14), Apple M1 (MacBook Pro), and Ryzen 7 4800U (Lenovo IdeaPad Slim 7), come out on the bottom. But the M1 actually does relatively well especially when you consider that it’s still the non-native version of Premiere. We also believe that huge advantage the Gigabyte Aorus 17 has with its 8-core Core i7-10870H and GeForce RTX 3080 would likely fall if we hooked up the Flow X13 to its GeForce RTX 3080 eGPU. Even if the MacBook Pro M1 picked up bump from a native version of Premiere, its inability to run an eGPU would hamper those who need extra GPU performance when running plugged in.

Our next test uses Pugetbench for Photoshop, to run the laptops through a spate of tests on the venerable photo editor. Photoshop tends to be less reliant on multiple cores, so CPUs with higher clock speeds as well as high efficiency tend to win. The filters also can be hit-or-miss—some use more cores, while others favor certain CPU designs. You can read more about just what matters to Photoshop, Premiere and Adobe Lightroom (which isn’t tested here on the Mac) in this deep-dive story. Photoshop also cares about a fast GPU for some tasks, but unlike Premiere, GPU doesn’t matter quite as much across the board.

Even without its external GeForce RTX 3080, the Asus ROG Flow X13’s Ryzen 9 5980HS stands above the others. We think it would open that lead even more with the XG Mobile attached. The Apple M1 in the MacBook Pro does relatively well, but it’s basically dead-even with Intel’s 11th-gen Tiger Lake chip in the MSI Prestige 14.

The Apple M1 is again handcuffed with Rosetta 2 translation, so we’ll have to revisit this when Adobe releases native versions. For those who actually use one of these new laptops right now, the Ryzen 5000 is clearly faster.

We’ll close out our results using Topaz Lab’s Gigapixel AI. It’s an application that uses AI to increase the quality of up-sampling of images. It’s one of a handful of applications to use Intel’s AI hardware acceleration, so Intel’s newest 11th-gen CPUs tend to do the best. The application can also use OpenGL, so laptops with big, burly GPUs or integrated graphics do better as well.

The winner, no surprise, is the 11th-gen Core i7-1185G7 in the MSI Prestige 14, by a huge margin. Even the laptops with very fast GPUs can’t beat it—though they get pretty close.

The mighty Ryzen 5000 in the Asus ROG Flow X13 is handcuffed by the GeForce GTX 1650 Max-Q, but the worst performer by far is the MacBook Pro M1. In fact, when Macworld ran Gigapixel AI for us, it was the first time the editor had ever heard the fan on the MacBook Pro M1 turn on.

This result tells us one thing: As apps take advantage of Intel’s DL Boost features, Intel’s CPUs stand to have a serious leg up. Apple’s M1 actually features its own AI hardware support, which we suspect it will persuade developers to support—eventually. The problem for smaller developers such as Topaz Labs is the engineering effort it has invested already, and how long it takes to make a 180-degree turn in strategy.

So that terrible performance of the MacBook M1 in Gigapixel AI and other apps that have supported Intel hardware may stick around for quite some time.

A note about battery life

We don’t get into battery life results here, but from all the reports we’ve seen, the list would probably put the Apple MacBook Pro M1 on top, followed by the two laptops with integrated graphics, the Lenovo IdeaPad Slim 7 and MSI Prestige 14. We do know the Ryzen 9 5980HS in the Asus ROG Flow X13 has no chance, with video rundown in the 5- to 6-hour range. So victory here, in all likelihood, goes to the MacBook Pro M1.

If you’re purchasing your laptop based on performance, it’s pretty clear which CPU you should choose: AMD Ryzen 5000. Despite the differences between it and the MacBook Pro M1 in wattage, both laptops weigh the same. That AMD and Asus can shoehorn such a powerful Ryzen 5000 into such a thin and light—and convertible—laptop is stunning. It’s going to be really hard to beat the ROG Flow X13.

Apple has powerful CPUs coming, but if those go into heavier and larger laptops—would those compare? We’ll cross that bridge when we get there. Right now, for performance users looking for the ultimate in portability and performance, the Asus ROG Flow X13 beats the MacBook Pro M1.