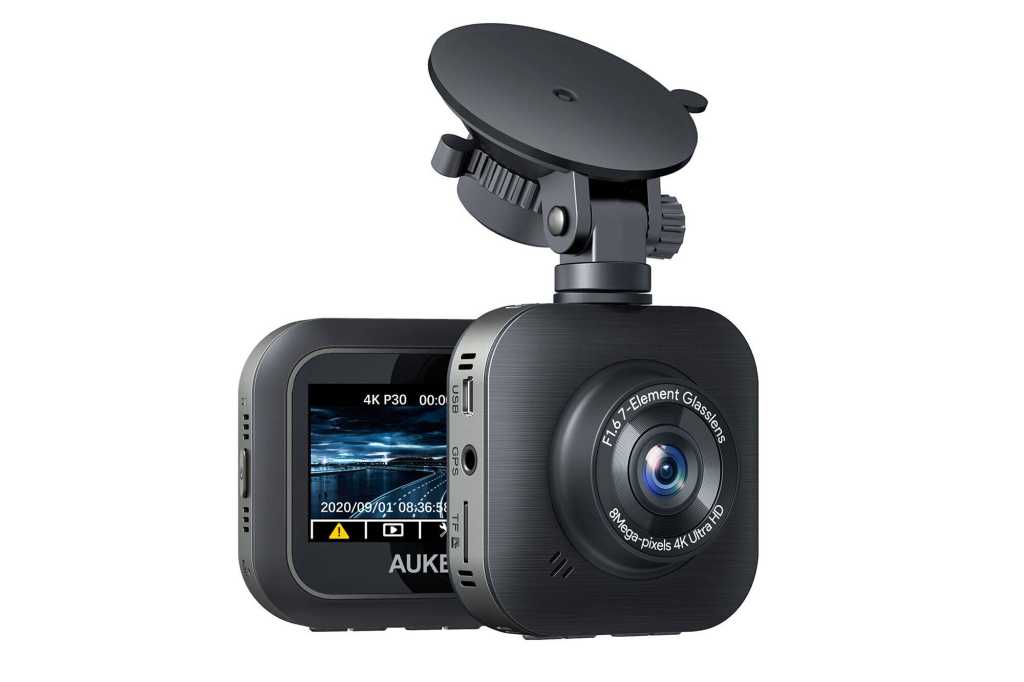 The Aukey DRS1 offers great 4K UHD, WDR day and night video captures, is easy to use, easy to install, and even easy on the budget.

It’s pretty amazing how far dash cams have come in just a few short years. Aukey’s 4K UHD DRS1 offers great 4K UHD/WDR day and night video captures, is easy to use, easy to install, and costs $120. Not long ago, a dash cam of that price would have delivered undersaturated day captures and weak night captures prone to headlight flare. Good riddance to the bad old days.

I used the optional GM-32 GPS module ($20 on AmazonRemove non-product link) in my testing of the DRS1. I recommend GPS for a number of reasons, including instant proof that the accident occurred where you say it occurred. Let’s consider the whole deal a $140 camera. Or I will, at any rate.

The DRS1’s external design is typical for the category. It’s a squarish (about 2.5 inches wide and high), 1.25-inch-deep camera with a 2-inch color display on the back. Four buttons on the bottom navigate menus and features. Bottom-mounted buttons can be harder to fumble for, but they also tend to disturb the orientation of the camera less than those placed on the side or back.

The left side of the unit (peering forward at the display) hosts the SD card slot, the 3.5mm GPS jack, and the mini-USB jack. The right offers the power button. The included suction mount attaches to the top of the camera.

The camera captures 30 frames per second at 4K UHD (3840×2160) using a Sony EXMOR IMX415 sensor. Of course, 4K UHD video requires about 750MB of storage for every three minutes of video, so I generally recommend dropping down to 1080p, or 1440p as a compromise. You’ll be able to fit about six times as much video (1080p), and your cards will last six times longer.

The GM-32 GPS module initialized quickly (some can take several minutes after power-on), provided accurate readings, and watermarked the info onto the video. My only gripe is that the DRS1 didn’t automatically use it to set the correct date and time. I’ve become used to this with other dash cams’ GPS, so I didn’t set it manually on the DRS1. That’s why the time and date are off in the screen captures shown in the performance section.

Aukey sells a dash cam hardwire kit ($20 on AmazonRemove non-product link), as do most vendors. Personally I recommend using a rearview mirror adapter (assuming your mirror is powered) or an OBD-II power connector, which are both easy to route and install.

The DRS1 has a supercapacitor that allows the camera to run for approximately 5 seconds after it’s removed from a power source. Though the runtime off power is low, it will be adequate under most circumstances. Compared to a battery it allows for far more power cycles, as well as a broader range of operating temperatures—minus 22 to 67 degrees Fahrenheit, in this case.

Both day and night video captured by the DRS1 is very good, though brightly lit areas tend to blow out (lose detail) slightly. Detail in other areas is excellent, as is the color saturation. Vendors don’t hype WDR (Wide Dynamic Range) as much these days, as its implementation has become almost a matter of course.

There is some graininess during playback, but this resolves into great detail when you pause. Motion stabilization, as my forays into the local bumpy streets proved, is very good

The DRS1’s night video is also very good. I was a bit worried, after the small issue with bright areas in the day video, that it would struggled with headlight flare. On the contrary, it dealt with it well.

Though I’d recommend switching to a lower resolution for everyday use to preserve your memory cards, I did quite like the 4K captures, and that higher resolution could prove handy during my visits to national parks.

The Aukey DRS1 is a very capable and easy-to-use dash cam. I very much appreciate the detail in 4K UHD captures. However, I don’t like replacing SD cards all the time, so I’d use 1080p—and you can get 1080p dash cams for considerably less. Then again, being able to switch to 4K UHD to capture something particularly noteworthy is a nice option to have. If you want 4K, then the DRS1 is one of the most affordable ways to get it.