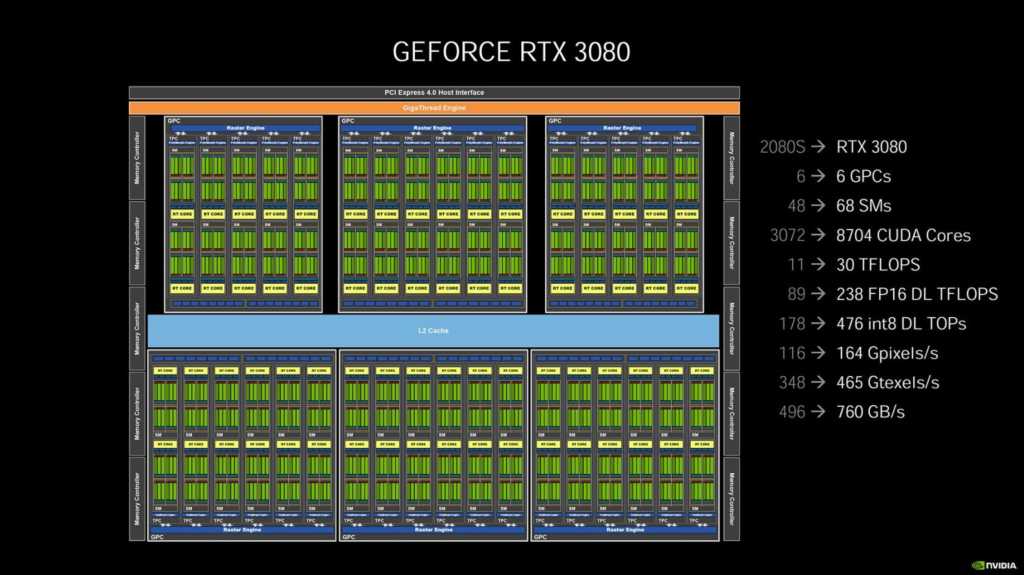 No matter how impressively fast the mobile CPUs are—and our first tests show they offer everything from good to outrageous performance—they will never measure up to full-fat GPUs. Nor should they be expected to, except in the messy stew of physics, modern marketing, and occasionally toxic consumer expectations.

So don’t expect this mobile GPU to be a desktop GPU. But do expect laptops with RTX 30-series to offer very impressive graphics performance, even compared to some of the biggest and heaviest laptops around.

Best of CES 2021: The most intriguing and innovative PC hardware

What is GeForce RTX 30-series mobile

Nvidia’s GeForce RTX 30-series is the highly anticipated mobile version of its stellar 30-series desktop GPUs. Built on the same 8nm Samsung process as the desktop part, the mobile GPU shares a lot of the same goodness.

They are not, however, exactly the same. For example, the desktop GeForce RTX 3080 packs 10GB of GDDR6X using a 320-bit bus and features 8,704 CUDA cores. It rocks 760GBps of memory bandwidth. Our review called it a “staggering performance upgrade,” and we weren’t kidding.

The mobile RTX 3080 version steps back to 6,144 CUDA cores, either 16GB or 8GB of GDDR6 on a 256-bit bus, and 384GBps of memory bandwidth. You’re also looking at nearly a 40-percent reduction in boost clocks, as well as tensor cores and RT cores.

All told, while the GeForce RTX 3080 mobile carries the branding of the GeForce RTX 3080 desktop, it’s a very, very different beast—and a break from Nvidia’s two previous generations. The 20-series and 10-series mobile GPUs were mostly the same dies as the desktop GPUs, but tuned for laptops.

We say all this because if you’re expecting mobile RTX 30-series to replicate a desktop GeForce RTX 3080 that has a thermal rating of 320 watts and a minimum 750-watt power supply for the PC itself (remember a laptop runs the entire system on the power brick), you’ve probably set yourself up for disappointment. There’s only so much you can do in a 4- to 6-pound gaming laptop running with a thermal envelope of 80 to 105 watts for the GPU, on a 230-watt power brick. But as you’ll see in our tests, the RTX 30-series makes the most of what it has.

Among the new features Nvidia brings to its 30-series is an improved Dynamic Boost 2.0. Dynamic Boost works by shunting power from the CPU to the GPU when needed, giving the GPU 15 additional watts of power.

Nvidia raises the AI catchphrase and says Dynamic Boost 2.0 can increase performance by 16 percent. Dynamic Boost 2.0 previously only allowed power to be shifted from the CPU to the GPU, but now it can actually flow back to the CPU from the GPU if the game is CPU-bound rather than GPU-bound. Nvidia said it can also now balance power with the graphics memory.

While Dynamic Boost 2.0 can pretty much be supported by any RTX laptop, it’s up to the laptop maker to enable it. We didn’t get deep into this feature here, but we plan to soon.

Nvidia said it has an answer for fan noise, too, using AI to help target fan curves and frame rates during gaming on a laptop. Unlike the older version that just slowed fans down, Nvidia said the new version manages CPU power, GPU power, and temps, along with the system fans and frame rate, to hit the target the gamer sets.

Note that you’ll see us use “(Max-Q)” throughout the story. Nvidia no longer uses that designation for its more efficient mobile GPUs, because they’re all the same die—it’s just how the laptop maker configures the laptop around it. If vendors choose to implement Max-Q Technologies, then, well, it’s still a GeForce RTX 3080 laptop—but with Max-Q Technologies enabled. The “(Max-Q)” is our way of telling you the power and thermal capabilities the laptop maker has built in.

The Predator Triton 500 had its CoolBoost feature enabled, which runs the fans harder. The Gigabyte Aero 17 had the CPU and GPU in boost setting, and fans using the “Gamer” profile.

Using the Ultra preset in Far Cry, the results give the RTX 3080 laptop about a 12-percent lead over the RTX 2080 Super laptop.

Moving onto Gears Tactics run at 1920×1080 and set to Ultra, the RTX 3080 laptop has about a 14-percent advantage in this turn-based tactic game.

Moving to something far less graphically intense, we fire up Counter Strike: Global Operations set to 1920×1080 and using the “Very High” Preset. We’re not even sure “Very High” meant that when the game came out in 2012, but from 2021, it’s definitely not high at all. This is one game that actually exceeds the 300Hz refresh of the panels, and probably a game where you need it if you want to compete to win or just don’t like getting AWP-shot by a 12-year-old every time you rush the bomb site.

Obviously one problem with the previous games we’ve run is they’re all very much CPU-bound. It is, in fact, a problem for the RTX 3080 on laptops. Just as laptop GPUs are a compromise to make them work in a laptop—so too are CPUs. To stretch the laptops a little more, we fired up Red Dead Redemption 2 with the performance slider set to prefer quality. That saw the RTX 3080 open up a little more breathing room, edging out the RTX 2080 Super by about 18 percent.

From there, we moved on to hardware ray tracing games, specifically Metro Exodus, which uses hardware ray-traced global illumination. The result gave the RTX 3080 laptop about a 20-percent lead over the RTX 2080 laptops.

We decided to take it up one more notch by running Bright Memory: Infinite Ray Tracing Benchmark. As you can guess from its name, it’s a benchmark (and game too) that uses pretty much Nvidia’s whole bag of tricks: ray tracing caustics, reflection, refraction, ambient occlusion, shadows, and DLSS 2.1. We ran it on its highest setting with DLSS on.

Our last game is Quake II RTX, a fully path-traced game that brings new life to a classic. We run it at 19×10 with global illumination and set to “prefer Nvidia extensions” rather than Vulkan for the ray tracing. The result puts the 3080 laptop about 30 percent ahead of the 2080 Super—not too shabby.

Given the CPU-limited performance of laptops it’s generally going to be pretty difficult to extract the performance out of the RTX 3080—even if differs greatly from the desktop counterpart.

For example, drawing on scores from the laptops we’ve tested in-house, the RTX 3080 mobile stacks up very well indeed. Two laptops are still faster than it—the original Alieware Area 51M with a desktop CPU and GeForce RTX 2080 (non-Max-Q version), and the Acer Predator Helios 700, which is equipped with a full-tilt  RTX 2080 and a CPU that hits very high clocks when the keyboard is pulled back to allow for extra venting.

Dialing up the graphics load from 3DMark Time Spy to Port Royal, we collected results to see if the RTX 3080 would continue to lose to the RTX 2080 laptops. As you can see, as we move to a heavily GPU-bound and ray-traced load, the RTX 3080 rightfully pops back on top.

While the RTX 3080 doesn’t deliver a slam-dunk in gaming, there is good news for content creators: GeForce RTX 3080 definitely crushes its predecessor. We’ll keep it  brief, but using Blender 2.91 we tasked both laptops with using the GPU to render the BMW GPU test. The GeForce RTX 2080 Super took about 36 seconds, while the GeForce RTX 3080 finished in just 19 seconds—basically half the time.

We also used IndigoBench, a GPU-based renderer. The results are in M Samples per second, and a longer bar is better. The 3080 turns in a score about 83 percent higher.

Our last content creation test uses V-Ray Next’s GPU render to measure performance of the GPUs. The GeForce RTX 3080 is about 104 percent faster than the RTX 2080. We also culled results from Puget Systems, which put the GeForce RTX 3080 mobile ahead of a GeForce RTX 2080 Ti and Titan RTX.

Overall, we think the GeForce RTX 3080 is indeed the best mobile GPU available right now. To be fair, it’s not much of a bar to set if all you have to be is better than the previous GPU. Don’t let your expectations be warped by the stunning GeForce RTX 3080 desktop card.

Would we upgrade from an RTX 20-series laptop? Probably not, unless it’s a bigger step such as a side move of going from an RTX 2060 to something faster. It rarely makes sense to upgrade from one generation to the next unless you are doing it for the the huge boosts in content creation advances.

When every laptop is its own package, our first review of a new component isn’t our definitive one. We’ll have a better feel for RTX 30-series laptops after we’ve tested another half-dozen or more. But clearly with a favorable implementation such as we tested, it can do very well indeed.