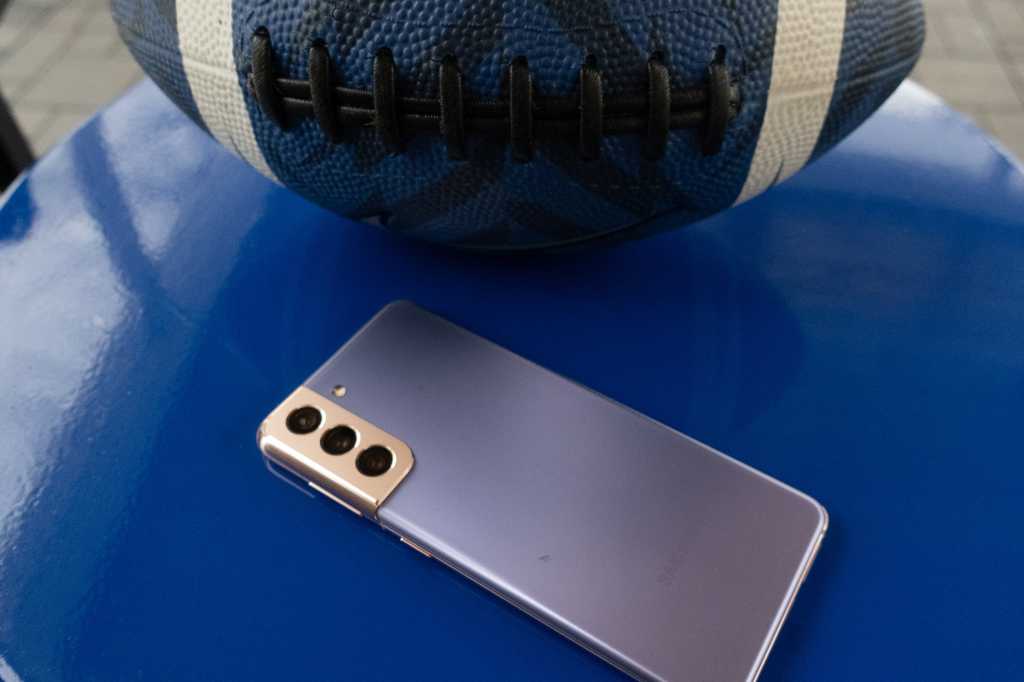 The Galaxy S21 cuts just enough to bring the price down without sacrificing what makes it a great phone.

The Galaxy S21 might be the smartest phone Samsung has ever made. Like the iPhone 12, it doesn’t have the best specs or the biggest screen. But it delivers where it counts, at a price that’s very attainable for a phone with a full complement of 5G, a high-end camera, and the latest Snapdragon processor. At $800, $29 less than the iPhone 12, and just $100 more than the Google Pixel 5 and Galaxy S20 FE, the S21 is already a strong contender for smartphone of the year.

Android and Galaxy enthusiasts will moan and wail over the things that are missing, which is admittedly a pretty lengthy list: 12GB of RAM, QuadHD+ resolution, expandable microSD storage, MST payment support, earbuds, a glass back, and a charger. But if you aren’t the kind of person who dives deep into spec sheets, the S21 will give you everything you need in a 2021 smartphone at a price that won’t make your eyes water.

8 quirks about the Galaxy S21

The secret value of the Galaxy S21

Samsung’s smartphone design has become somewhat predictable in recent years, as bezels shrank and camera arrays grew. But the S21 is something truly different with an Apple-like level of attention to design.

The pictures here don’t really do it justice. Samsung incorporated the camera array into the metal band that connects the screen to the back, which serves both to minimize the bump and make it flow better into the overall design of the phone. It’s one of the only camera modules I’ve seen that doesn’t feel like it was tacked on, and it makes the phone truly feel like a cohesive unibody enclosure.

The camera design isn’t just about looks. Where the S20 was extremely top-heavy and somewhat clunky to hold, the S21 feels much lighter despite actually weighing more than its predecessor (171 grams vs 163 grams). The new camera array adds a bit of balance to the S21 and makes it much more pleasant to hold for longer periods of time.

Also helping the weight distribution is the choice of materials. You probably wouldn’t know it to look at it, but the S21 is made of “reinforced polycarbonate” to keep costs down. It still feels more premium than the Pixel 4a due to its weight, and the texture feels closer to aluminum or frosted glass than the plastic material it is.

A great screen even with sacrifices

Around the front, the S21 has the same 6.2-inch display as the S20, surrounded by very skinny bezels. The screen is flat here rather than curved, but the visual difference is minor. The phone is actually slightly narrower (151.7 x 69.1 x 7.9mm vs 151.7 x 71.2 x 7.9mm) as a result, making it easier to hold and a bit less prone to accidental touches.

Also less accident-prone is the fingerprint sensor. Samsung is still using an ultrasonic scanner built into the display, but it’s bigger and faster than the previous sensor in the S20. The difference is noticeable and cut down dramatically on my errant scans. It’s not quite as consistently accurate as the physical sensor in the Pixel 5, and I’d much prefer a 3D facial scanner, but when it works, it feels closer to a premium biometric.

Like the S10e and S20 FE, the S21’s screen tops out at Full HD (2400×1080), the lowest for a standard S21 in some time. Much like the plastic back, however, you’ll need very discerning eyes to see the deficit of pixels. Otherwise, it’s just as bright, vibrant, and speedy as before, and it’s a bit more efficient too. The S21 has the same speedy 120Hz refresh rate as the S20, but a new “Adaptive” setting dials it back to 48Hz when not in use. You can also still set it to 60Hz, but I’m much more comfortable with recommending it stay on 120Hz now.

Also new to the S21 display is an adaptive blue light filter that automatically adjusts the screen’s colors based on the time of day. It’s similar to Apple’s Night Shift and an upgraded version of Samsung’s own blue light filter that has shipped for years. If you’ve already been using it, it won’t make all that much of a difference except now it’s called “Eye Comfort Shield.”

Even with a somewhat gimmicky new feature and lower resolution, the S21 is still one of the best smartphone screens I’ve ever used. If you compare them side by side as I did, you can tell that the Ultra is a bit superior, but the compromises Samsung made with the S21 are acceptable and unnoticeable even if you spend many hours looking at your screen each day.

The Galaxy S21 uses the latest Snapdragon processor, the 888, so performance is as you’d expect: excellent. Even with “just” 8GB of RAM (4GB fewer than the S20), apps, animations, and transitions fly around the screen.

That has mostly to do with Qualcomm’s super-speedy 5nm system-on-chip. Benchmarks posted a modest increase over the S20’s 865 chip, but there are plenty of improvements that won’t show up in the standard tests. Most notably, the chip now has an integrated 5G modem to deliver greater power efficiency. Samsung is also using UFS 3.1 storage for noticeable faster read/write speeds:

These are the kind of year-over-year improvements you expect from a Samsung flagship. They matter less if you’re coming from an S20 or even an S10, but upgrading from an S8 will be a noticeable improvement. Smartphones have been fast enough for many years now, but small things can make a big difference in how fast they feel, like W-Fi 6 and 5G, both of which are on board.

A couple of notable things are missing. The MFT chip that let you use Samsung Pay at older credit card terminals is gone, and the ultra-wideband chip necessary for precisely locating Samsungs’s SmartTags isn’t here either (you’ll get it on the S21+ and S21 Ultra though). You also won’t be able to expand the 128GB of base storage with a microSD card like in Galaxies past—that slot is gone. But like the screen, those are acceptable sacrifices that few users are likely to notice.

The S21 has the same 4,000mAh battery as the S20, but the integrated modem as well as the adaptive, lower-resolution display help it last a little longer. In benchmarks, I approached 10 hours, and in regular use, I rarely had to worry about charging until the end of the day. I put it somewhere between the iPhone 12 and 12 mini, which is to say the battery life is very good.

The Galaxy S21 ships with One UI 3.1 based on Android 11, making it the earliest phone Samsung has shipped with the latest version of Android. Samsung offers a dizzying array of customization and personalization options, but even if you leave the stock settings as-is, it’s one of the better Android skins.

You’ll still have to deal with Bixby and occasional ads for Samsung apps and products, but you can make the same criticisms about the iPhone 12. Plus you’re guaranteed to get three full generations of updates, so the S21 will get Android 14, the same promise Google makes with the Pixel 5. Hopefully, major updates will be delivered quicker by then, but either way, buying a premium Samsung phone is no longer a guessing game when it comes to Android support.

For the first time in a while, the Galaxy S21 has the exact same camera hardware as the Galaxy S20, with 12MP wide and ultrawide lenses and a 30X hybrid optical Space Zoom telephoto lens. Like Apple and Google, however, Samsung has done work behind the scenes to boost the quality, so the photos you snap with the S21 will be a bit better than they’d be from the S20.

With the exception of zoomed photos, however, the photos I took with the S21 still aren’t quite as good as the ones I took with the iPhone 12. The differences come down to small bits of detail here, white balance there. Samsung has definitely refined the S21’s photo-taking abilities, but there’s still room for improvement.

Most notably, the S21 tended to brighten photos excessively even when night mode wasn’t activated, which often led to blown-out details and washed-out colors. As you can see in the image above, some of the details of the stamen and the petals are lost due to overexposure. You can also see some slight struggles with night mode below as compared to the iPhone 12 and Pixel 5. Again, these are extreme examples that are very nitpicky. Overall, the color accuracy and focus is sharp, and it was very easy to snap quick photos with excellent results.

However, as you’ll see in my upcoming S21 Ultra review, the differences are quite noticeable. It’s frustrating that phone makers are reserving the best cameras for phones with the biggest screens, but if photography is important to you, you should definitely consider the Ultra, even at a $400 premium.

Should you buy a Galaxy S21?

When you boil it down, the Galaxy S21 isn’t all that different from the S20. It has the same size screen and the same camera, along with less RAM and a lower resolution. You’re also giving up a microSD card slot.

But those changes won’t be all that noticeable to most users, and it comes with a nice $200 price cut over the S20. At $800, the Galaxy S21 is one of the best premium smartphone bargains I’ve seen in years. You’re also unlikely to find a Snapdragon 888 phone for less until the second half of 2021.