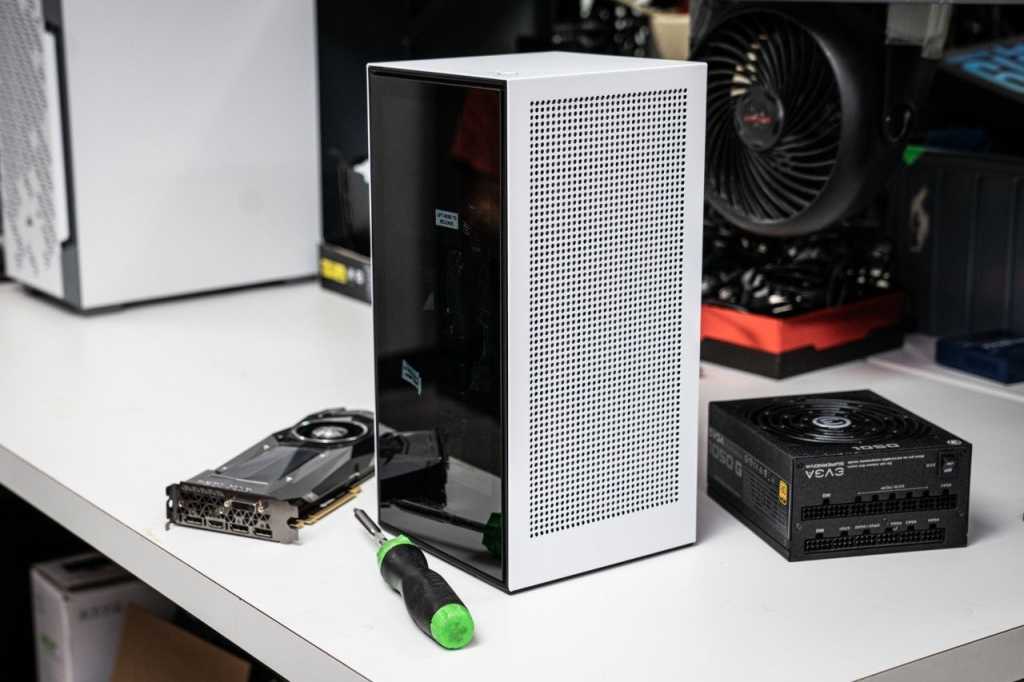 The NZXT H1 may have been one of our favorite PC cases of 2020, but it’s had a rough few months. NZXT halted sales of its Xbox One-like case in December due to a “low probability occurrence” of a fire caused by screws connecting its PCIe riser cable to the case. Shortly after, the company started shipping nylon screws out as a repair kit and resumed sales of the case—but now the H1 has been yanked from store shelves yet again after a Gamers Nexus investigation showed that the screws themselves aren’t the root problem, coaxing two different units into lighting ablaze.

“We will be removing the H1 from the NZXT Store and NZXT BLD,” NZXT CEO Johnny Hou said in a post on the company’s website. “We’re going to send out redesigned PCIe Gen3 Riser Assemblies for current H1s and we’re going to help with installation for those who need it.”

NZXT goofed on its design of the H1’s PCIe riser cable, which is used to position your graphics card in the space-constrained case. Gamers Nexus discovered that the error created “a 12 volt short to ground, which effectively creates a heating element within the system,” as explained in the video below.

“You get a blow-out and a burn-up of the board, primary near that bottom screw,” Gamers Nexus explains. The issue may indeed have a “low probability occurrence” as NZXT claimed, because the original metal screws needed to be turned just right to cause a fire, but as Stephen Burke as Gamers Nexus said, “the severity was high.” Over time, however, screwing and unscrewing the PCIe riser makes the issue more likely to occur, Gamers Nexus says.

I highly recommend watching Gamers Nexus investigation to understand the depth of the issue: Part 1 is here, and part 2 is here.

The nylon screws included in the repair kit prevent the short from occurring, but if a user replaces them with standard metal screws in the future, or uses the PCIe riser cable in another system with metal screws, the risk of fire remains (and increases the more the hardware gets moved). It’s a fundamentally unsafe design, and it’s shocking that it got past NZXT’s engineering and quality assurance processes. Several standard best practices were ignored in the creation of this riser cable, Gamers Nexus says.

Hou claims that will be fixed going forward.

“Going forward, we’re instituting more robust and thorough design processes,” his statement says. “From the initial designs, QA, to additional testing, we’re committed to quality in both our products and our response to your concerns.”

NZXT will be automatically sending a redesigned PCIe riser cable to anyone who requested a nylon screw repair kit, though you can opt out here. (You shouldn’t.) If you own an NZXT H1 and haven’t requested a repair kit yet, you should) and can do so here. It will take under the latter half of March for those replacement PCIe riser cables to get to customers, NZXT told Gamers Nexus, so be sure to install those nylon screws as a temporary fix in the meantime. You can request a full refund for the case as well.

The company is also working with the U.S. government on a proper recall, it claims. “We have been working closely with the U.S. Consumer Product Safety Commission (CPSC) towards a formal recall since November 2020. We will share this directly with you as soon as the official recall is announced by the CPSC.”

It’s a sad chapter for an otherwise appealing case, and the Gamers Nexus crew deserves tremendous kudos for digging deeper and prodding NZXT into acknowledging the dangerous root issue. NZXT is also doing the right thing now. The message from Johnny Hou contains additional FAQs and information about the NZXT H1 fire issue. Meanwhile, make sure you’re following Gamers Nexus on YouTube as this ordeal progresses since they’re a killer resource for in-depth PC hardware testing and analysis.