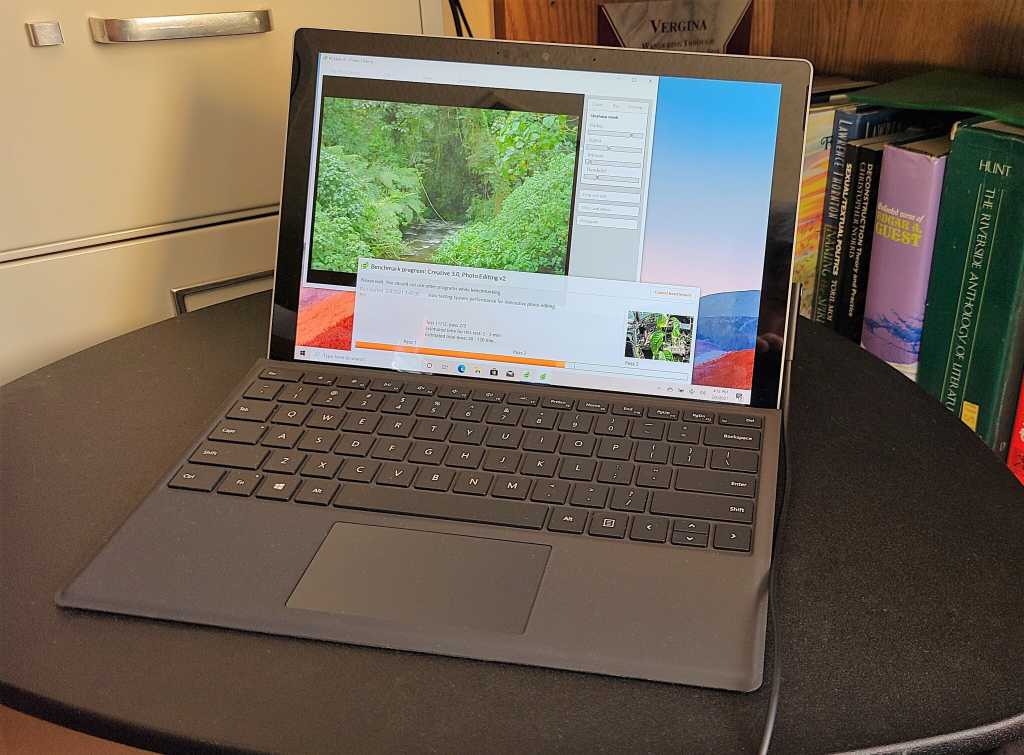 We’ll have to wait until we complete our Surface Pro 7+ review to answer that question fully. But so far, we’ve been somewhat shocked by the performance we’ve seen from the new model. In this story, we begin to answer two related questions: How much faster is the Surface Pro 7+ compared to the Surface Pro 7, and how much faster is the tablet version of Intel’s 11th-gen Tiger Lake chip versus its predecessor, the 10th-gen Ice Lake? The answer is: a lot, and without any fan noise to go along with it.

For benchmark nerds, one of the best things about the Microsoft Surface family is that the various models have remained relatively unchanged, making it easier to draw solid comparisons between generations. That allowed us to use the Surface Laptops to compare Intel’s Ice Lake chip against the AMD Ryzen 3000 Mobile family, for example, to determine the best mobile processor of that generation. Now we can do the same for Intel’s tablet chips.

We have a review unit of the Microsoft Surface Pro 7+ in house, and we’re working through our performance tests. But even in the benchmarks we’ve run so far—from synthesized CPU tests to a series of creative workloads—already tell us that the Surface Pro 7+ offers some massive advantages, specifically in graphics. Here’s a sneak peek.

Here’s a small snapshot of the two system configurations. The key differences are in the processor and the integrated GPU. Note that Intel’s Ice Lake chips were considered U-series processors, while Intel now refers to its Tiger Lake tablet processors as “UP4” chips.

At the time we reviewed Microsoft’s Surface Pro 7, we were focusing more on whether it was a better buy compared to the Surface Pro X. Even the subset of benchmarks we used for that review, however, paints a picture of the two tablets and the chips inside.

Cinebench R15: Up to 22-percent improvement

For every enthusiast and some consumers who simply want to know how fast the new 11th-gen Tiger Lake chip is, we can see that in the Cinebench R15 benchmark. This brief test demands a burst of energy from the CPU, so it tends to reward chips with higher boost clock speeds.

When we bumped up the performance slider on the original Surface Pro 7, basically nothing happened. We weren’t expecting much on the Surface Pro 7+. Boy, were we wrong.

Basically, adjusting the power slider increased Cinebench multithreaded performance from a 6-percent upgrade over the Surface Pro 7 to about 22 percent. (We’ve shown that in the graphs above and below with the red bar, outlined in black.) That’s an amazing, unexpected boost. Single-threaded performance, though, increased just 6 percent.

PCMark 8 Creative: Up to a 15 percent improvement

Microsoft bills the Surface Pro lineup as a tool for productivity as well as content creation, and the tablet form factor lends itself to drawing as well as creative work. We used the PCMark 8 Creative suite of tests (measuring web browsing, photo editing, light gaming and more) to measure this aspect of performance. Again, the Surface Pro 7+ outpaces its in-house competition, and performs even better with the performance slider dialed up.

HandBrake: Up to 10-percent improvement

Over time, we’ve tended to regard Cinebench as a sprint for the CPU, while using the free HandBrake utility to transcode a movie pushes the CPU to the limits over a marathon of an hour or so. The performance improvement over the Surface Pro 7 is less pronounced here, even with the Windows performance slider dialed up to maximum.

Last but not least, UL’s 3DMark test offers us a closer look at the the 3D performance of the core. Remember, with Tiger Lake, Intel transitioned to its Xe graphics core, promising all sorts of performance advantages. And boy, did it ever!

The Surface Pro 7+ absolutely crushes its predecessor, especially when you dial up the performance slider–graphics performance nearly doubles! That’s a strong endorsement for Intel’s integrated Xe core, at least compared to 10th-gen chips.

These performance results represent an early peek at our full review in progress for Microsoft’s Surface Pro 7+. We continue to run benchmarks and delve into its other new features—integrated LTE, for example—beyond the processor upgrade.

We don’t know whether the unexpected performance boost is characteristic of the Tiger Lake chips at large, and will be reproduced on upcoming, competing tablets like the Lenovo ThinkPad X12 and the Dell Latitude 7320. (The results from another, more traditional Tiger Lake notebook we’re testing don’t seem to be swayed by the performance slider setting.) Still, we can predict that the leap to Intel’s 11th-gen processors will translate into substantially improved performance. It certainly provides a compelling reason to upgrade to the Surface Pro 7+.