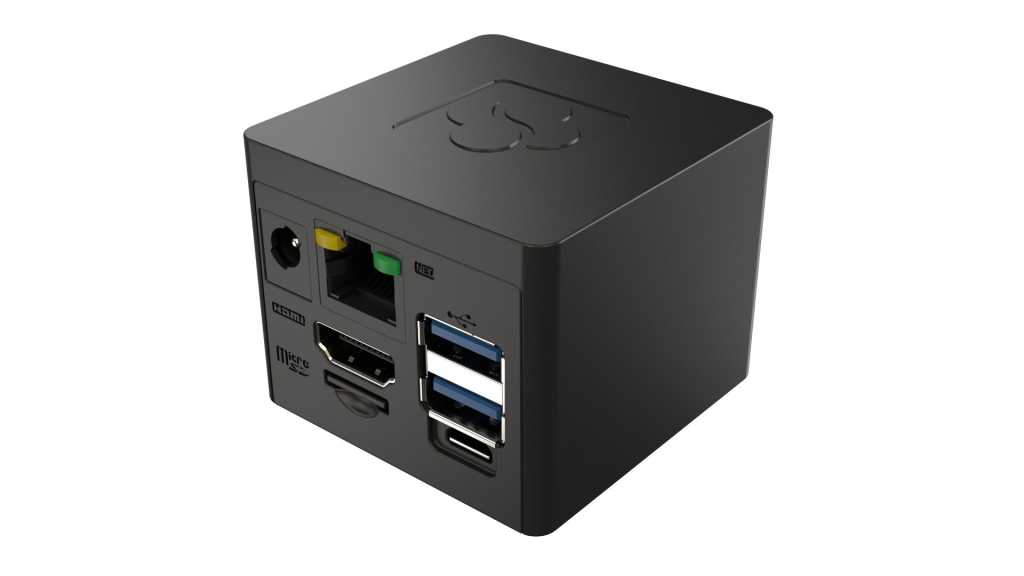 If you’re a tinkerer who needs a new machine for machine learning or exotic maker creations, the diminutive CuBox-M Micro Desktop PC from Israel-based SolidRun might be up your alley. This addition to the CuBox line is designed specifically for application development and maker projects like a smart home hub. Prices start at $99.

The CuBox-M is based on the i.MX 8M Plus system-on-module (SoM) from NXP Semiconductors. It features up to a quad-core Cortex A53 CPU with a Cortex M7 core, plus a Cadence Tesilica HiFi 4 digital signal processor for voice and natural language tasks. There’s also an integrated neural processing unit for AI and machine learning, and optional power-over-ethernet.

The SoM is integrated into a carrier board boasting a number of ports, including one HDMI 2.0, one ethernet, two USB 3.0, one microUSB, and a microSD port for storage. The PC draws its energy from a 12V power port, and there’s an IR receiver for anyone looking to enable remote control. Its fanless design should run in utter silence.

RAM is configurable up to 8GB, but the base level is 4GB.  The CuBox-M Micro Desktop PC also includes 8GB of onboard memory.

All of that handy computing hardware comes packed up in a tiny box measuring two inches on each side. The compact box is one of the major selling points of this product, according to the company. The idea is that you have the convenience of something like a single-board computer (SBC) such as the Raspberry Pi or Nvidia’s Jetson Nano developer kit but already packaged in a diminutive case. (Of course, DIYers who don’t mind putting some work into building their machine can house their Raspberry Pi in a case, too.)

“Sometimes a software developer or machine learning researcher just wants a streamlined system to test their product on, be it an Android application or a new Edge-based AI inference algorithm,” SolidRun’s chief systems architect Jon Nettleton said in the announcement.

While the CuBox-M is meant for software development, tiny desktops like this can sometimes double as all-purpose PCs for home use. In this case, however, the CuBox-M might not be ideal as its HDMI port is limited to 1080p at 60Hz. That’s fine for the time being, but with 4K quickly becoming the new standard on television sets it’s only a matter of time until 4K resolution is the standard for most content.

As is typical with mini-PCs, the CuBox-M doesn’t come pre-loaded with any software. It’s compatible with the Linux kernel version 4.9 or higher, and it can run Linux or a version of Android. SolidRun provides software built for the SoM for download via its website and GitHub, including versions of Android 10 (with 11 coming soon), Debian, and two Linux versions for embedded devices: Buildroot and Yocto.

The CuBox-M could be an interesting device for makers who want something a little more like a PC out-of-the box rather than a bare single-board computer. Regardless, this is pretty much a device for software development and DIY smart home projects. It’s not the ideal choice for a home theater PC or other uses where 4K output matters.