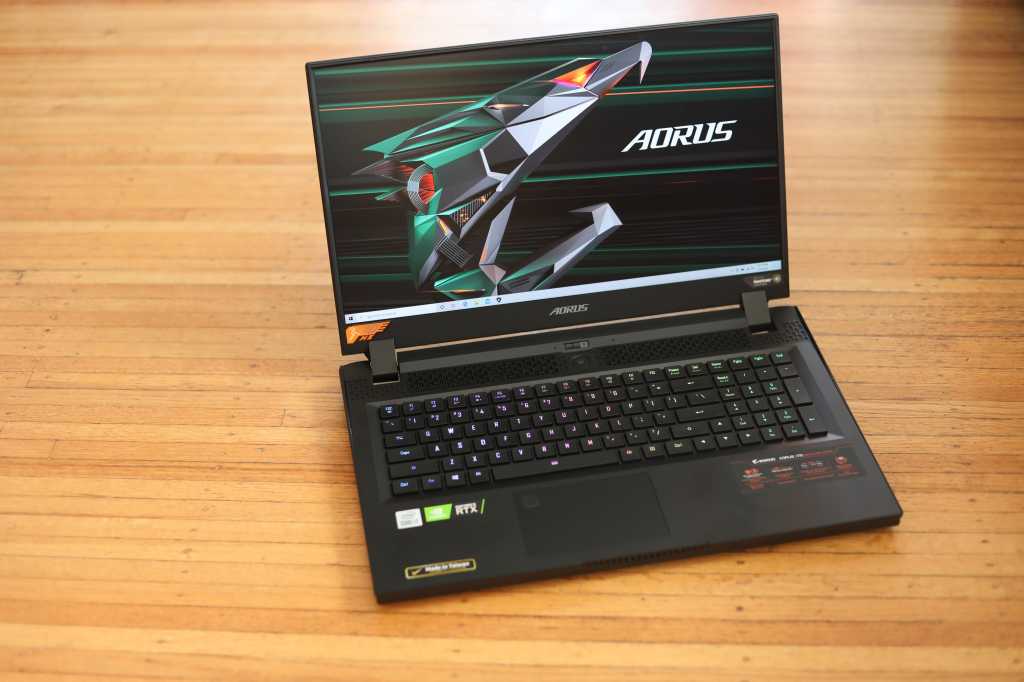 Gigabyte’s Aorus 17G brings top-notch GeForce RTX 3080 gaming without all the noise you normally get in a gaming laptop.

Gigabyte’s Aorus 17G gaming laptop, with its high-end parts and sharp-angled design, looks like it should be loud, but it’s not. It’s amazingly quiet, actually.

How quiet? On its default fan profile we registered the laptop at barely 38 dB. That’s barely louder than the background noise of our office in the daytime. Cars driving by on the street registered more noise than the Aorus 17G looping a graphically intense stress test. We’ve heard ultraportable laptops produce more noise under a load than the Aorus 17G does while gaming.

It may spoil your fun a bit to know that Gigabyte achieved this feat by taking the RTX 3080 mobile GPU down a notch in performance. If you always want the ultimate gaming machine, you’ll invest in a good pair of gaming headphones and put up with a shrieking hair dryer shaped like a laptop. But if you wished gaming laptops weren’t so loud, the Aorus 17G grants your wish with a modest tradeoff.

The Aorus 17G’s design is basically the opposite of the austere laptops that seem embarrassed to be capable of gaming. It features a mostly aluminum body with sparing plastic use. Its design is what you might call a nooks-and-crannies take, with many angles, fan inlets, and exhaust ports. While there’s no RGB strip, the angular contours and heavily vented bottom pretty much scream gaming laptop.

So do the specs, which we’ll break down here.

Ports: See photos above and below. The right side gives you a full-size HDMI port, miniDisplayPort, Thunderbolt 3, SuperSpeed USB 5Gbps (USB-A), and a dedicated charging port for the 230-Watt power brick. The left side gives you another two SuperSpeed USB 5Gbps (USB-A) ports, analog audio out, and analog mic port, along with a UHS-II SD reader and 2.5 Gigabit ethernet port.

A couple of nice features you don’t see as much these days are the full-size HDMI 2.0 and the miniDisplayPort 1.4 port. While the Thunderbolt 3 port is hooked up to the Intel integrated graphics, the HDMI and miniDisplayPort are plumbed directly to the GeForce RTX 3080 card. That won’t matter to many, but for VR users it’s a must-have. Older VR systems use HDMI, but newer systems such as Valve’s Index require DisplayPort.

We suspect Gigabyte’s CEO is a southpaw, however, because the power connector for the 230-watt brick is on the right side, which is sure to anger right-handed gamers. Fortunately, Gigabyte uses a cable with a 90-degree bend, so it’s not too intrusive.

The trackpad on the Aorus 17G is a glass-smooth piano hinge design, meaning it’s hinged closer to the keyboard and harder to depress in that area. It features an integrated Windows Hello fingerprint reader and is Microsoft Precision Touchpad-compliant. The trackpad seem a bit small for the size of the laptop, but it worked adequately.

Gigabyte builds in some productivity with a 10-key numeric keypad and full-size, inverted-T cursor keys. Those trained in the dark art of accounting should note, however, that the ten-key uses the telephone layout, rather than the more useful calculator layout that would put the ‘0’ key below the ‘1.’

The keyboard features per-key lighting and Omron mechanical switches, which offer a nice, deep 2.5mm of travel and a 1.6mm actuation point. Many believe that mechanical switches work better for gaming, but in any case the clicky sound of the Omron switches in the Aorus 17G brought joy to our ears. They sound and feel crisp, with a nice snap as they release.

The camera is a pretty typical 720p resolution, with a physical slide cover and average image quality. It is, however, mounted below the screen, which gives your colleagues a great view of your nostrils and double chin.

The speaker quality is better than we’ve heard in thin-and-light gaming laptops, but that’s not saying much. Still, the fact that you can hear these so-so speakers over the fans is a triumph for the Aorus 17G. Speaking of which…

Why the Gigabyte Aorus 17G is so quiet

Gaming laptops have a reputation for being loud, because it takes a lot of cooling to keep a hardworking CPU and GPU in line during intensive gaming. Those cooling systems have tended to rely heavily on fans to pull in cool air and push out hot air, and those fans can get loud. That’s why the Gigabyte Aorus 17G’s hushed tones are so surprising—and why we had to take a closer look.

We set the laptop’s GPU to its “Boost” setting, which runs it harder than stock, and left the CPU on its normal profile, and then ran 3DMark’s stress test on the Aorus 17G. We measured sound with our calibrated sound level meter placed at a 45-degree angle, two feet from the laptop’s hinge. That’s roughly head height.

We typically brace our ears for the shrieking sounds after 10 or 20 minutes of a graphics load. The fan do kick on with the Aorus 17G, but the noise never climbs above 38 dB. We could loop 3DMark Time Spy 40 times or 100 times, and it would not change.

Because the ambient room temperature matters, note that most of our testing was conducted in a room whose temperature ranged from 70 to 74 degrees Fahrenheit. On an 85-degree day we suspect the Aorus 17G might make a little noise, but other laptops we tested in the same climate kicked their fans on far louder almost immediately. For comparison, the Asus ROG Flow X13, which is actually quieter than most laptops with its custom RTX 3080 eGPU setup, pushed 48 dB.

Gigabyte achieves the quietness by pairing the 8-core Core i7-10870H with a lower Total Graphics Power (TGP) of 105 Watts for the GeForce RTX 3080 GPU. Laptop vendors can customize the TGP, and we’ve seen most in the 155-Watt range. Using a lower-power RTX 3080 means giving up some performance, but how much is the question.

Much of the luster of Intel’s H-class chips has faded with the appearance of AMD’s Ryzen 5000 chips, which finally come with high-end GPU options. You can see that below in the results running Maxon’s Cinebench R15 on various laptops. Cinebench is a 3D modelling test, and the multithreaded test favors chips with more CPU cores. While the Ryzen 5000-powered Asus ROG Flow X13 takes the prize, the Aorus 17G’s performance is still quite good. In fact, it’s very close to the much larger and much heavier (11-pound) Acer Predator Helios 700, just above it in the chart.

We also run Cinebench using a single thread to gauge performance in the majority of mainstream applications that use only one CPU core. Other than the newest Ryzen 5000 chips, most of these laptops fall in close to one another, with small differences you’d probably never notice.

Our last CPU-focused test uses the free HandBrake utility (version 0.9.9) to stress the CPU on a long-running task—transcoding a 1080p 30GB MKV file for use on an Android tablet. The Aorus 17G does well, nudging right up with the Asus ROG Flow X13 and its 8-core Ryzen 9-5980HS chip. The fastest, of course, is the 8-core desktop CPU in the Alienware Area 51M R1.

What about gaming performance? Find out on the next page.

Because most people who buy the Gigabyte Aorus 17G will use it for gaming, graphics benchmarks matter even more. Up first is UL’s 3DMark Time Spy. It’s a synthetic test—meaning it’s not an actual game—but it’s well-respected. Many overclocking contests use 3DMark as a gauge because of its reliability.

Unlike an in-game benchmark, you can mostly separate CPU performance from GPU performance in 3DMark. That should help if you’re wondering how much you give up on the 105-watt TGP RTX 3080 in the Aorus 17G, compared to a laptop with a higher-wattage version.

You can see that directly below, where the two RTX 3080-based laptops are separated by about 18 percent in performance. The Gigabyte Aorus 17G is actually slightly outperformed by the Alienware Area 51m and the Acer Predator Helios 700—but both are giant laptops running the higher-wattage versions of their respective GPUs.

We also looked at a few games, including Rise of the Tomb Raider running in DX11 mode at 1920×1080 resolution, set to Very High. It’s about a five-year-old game and likely getting to be more CPU- than GPU-dependent. The Gigabyte Aorus 17G slightly outperforms the Asus ROG Flow X13 and its external GeForce RTX 3080, even though the latter runs at a higher wattage, likely due to limitations with the x8 connection of the external GPU.

Looking toward the future of PC graphics, we used 3DMark’s Port Royal test to measure the performance of the Aorus 17G using hardware ray tracing. The Aorus 17G with its much more advanced RTX 3080 easily outperforms both of the high-wattage RTX 2080 GPUs in the much larger laptops. We also see the Asus ROG Flow X13 and its 150-watt GeForce RTX 3080 is about 16 percent faster than the Gigabyte Aorus 17G with its 105-watt RTX 3080.

As we said earlier, if you’re into absolute performance needs, you should pony up for a laptop that features a higher-wattage GeForce RTX 3080. Of course, there is a noise cost to the full-bore version. The Asus ROG Flow X13’s external eGPU is quieter than some other 150-watt RTX 3080 laptops we’ve seen—but it’s still about 10 dB louder than the Gigabyte Aorus 17G. To most ears, that’s about double the perceived loudness.

Our last test, of battery life, uses Windows’ Movies & TV app to play a 4K video, with the screen set at a relatively bright 250 to 260 nits, earbuds connected, and the laptop in Airplane mode. The Aorus 17G features Nvidia’s Optimus hybrid graphics, which turns off the discrete GPU and passes the work over to the CPU’s more frugal graphics cores. Battery life is just under six hours, which is pretty fair for a laptop with a screen this large and a GPU this powerful.

Of course, video playback is probably one of the easiest things a laptop can do today. Browsing, using Photoshop, or editing video will cause battery life to plummet, and games drain the battery most of all. Because most people who game know better than to do it on battery, however, the six hours-plus from the Aorus 17G is fine.

Whether the Gigabyte Aorus 17G is the gaming laptop for you largely depends on how much performance you’re willing to sacrifice for peace and quiet. In games, it’ll hinge on just how much the game is GPU- or CPU-bound. We’ve seen performance hits from as little as 2 percent to as much as 25 percent compared to laptops of similar size and weight.

For content creation apps, such as GPU-based rendering or compute, the differences between the 155-watt RTX 3080 and the 105-watt RTX 3080 shrink to 10 to 15 percent. That’s still a noticeable performance sacrifice, but we understand if you’ll take the hit because your ears can simply no longer take it. The Gigabyte Aorus 17G is still a very fast gaming laptop, and far from the noisiest, an awfully appealing combination.