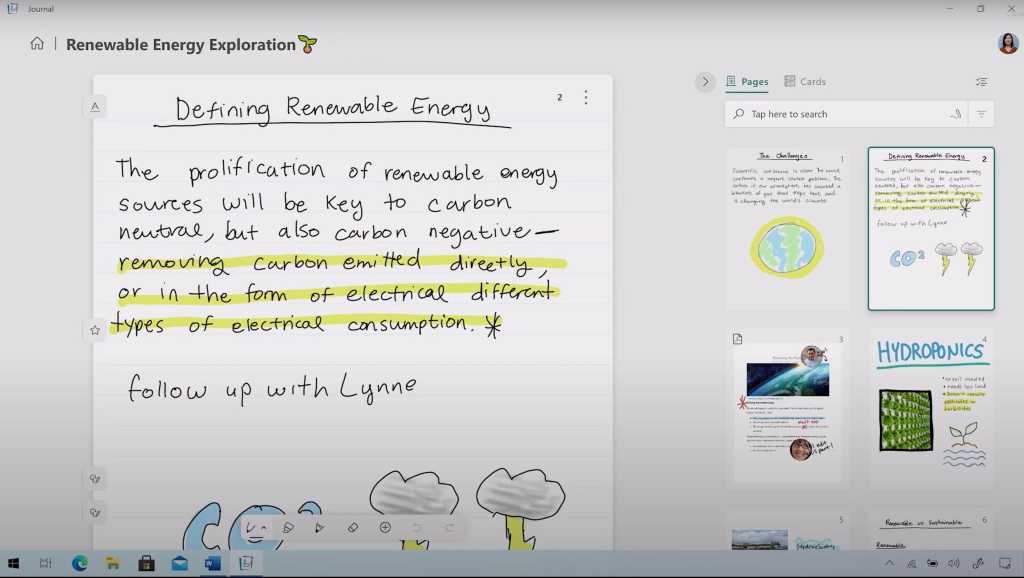 If you’re a Surface tablet owner or simply someone who prefers inking over a keyboard, you may be searching for an app that prioritizes the pen. For that, there’s a new Microsoft app: Journal.

EDIT 4/7/2022: Journal is not only a new Microsoft app, it’s a new Windows app. This week, Microsoft released Microsoft Journal in the Windows 11 style with all new colors and materials. This new release rolls out between April 5th and April 8th, Microsoft said. If you want it now, get it from the Microsoft Store.

Journal matters for two reasons. One, Microsoft is trying to offer everything pen and paper does, plus more. And second, Microsoft tends to migrate features—or gestures in this case—it develops inside individual apps to the greater Windows and app environment. It’s possible that Journal represents some future version of Windows.

Technically, Microsoft Journal is part of the Microsoft Garage, an app incubator that sometimes (but not always) produces a full-fledged application. Journal’s noteworthy because Microsoft designed it as an ink-first application. In reality, that means eliminating certain conventions: erasing e-ink by flipping the pen over or pressing a button, for example. Journal’s UI is also page-based. Finally, Journal “looks” at what you write, tries to figure out what it is you’re inking, and offers suggestions to manipulate that text.

That’s the difference between Journal and say, OneNote, which relies quite a bit on typed text and supplements that with inked notes and drawings. As you write, Journal recognizes what you write—just like the updated Microsoft Lens app that it recently introduced—and can translate it into text behind the scenes. Since Journal is connected to Microsoft 365, a text block can then be copied into Word. Journal is also integrated into the Calendar app, so you can scrawl notes during meetings.

Using Journal appears to be slightly different than Microsoft’s other apps. For one, there’s no panning and zooming—Journal provides you with a page, and you can only scroll up and down.

More important, however, are the new gestures. Circle or lasso a block of text, and Journal knows that you’re selecting it. Mistakes are scribbled out, not erased, and Journal will then get rid of the eliminated characters. Put dots in front of a list, and Journal will know it’s bulleted text. It also appears that Journal will also be able to import and mark up PDF files. That was a feature that the first Edge browser offered, but is slowly coming to speed inside the “new” Edge.

For now, however, the Journal inking page takes up just one part of the page. The other can be reserved for a search panel, including stored Journals that you previously inked, as well as a search box (where characters can be inked in). Here, Microsoft is trying to move away from document names to get you to think about object types: a list, say, or a sketch. Microsoft is also replacing the term “search” with “filter”—as in “to filter on” a sketch, rather than search for it. We’ll have to see if that sticks.

Journal looks like one of those apps that may take off among a dedicated group of e-inkers…or not. Like many things within Windows, Journal is there if you choose to use it.

This story was updated on April 7 to note that Journal will now be part of the core Windows apps.