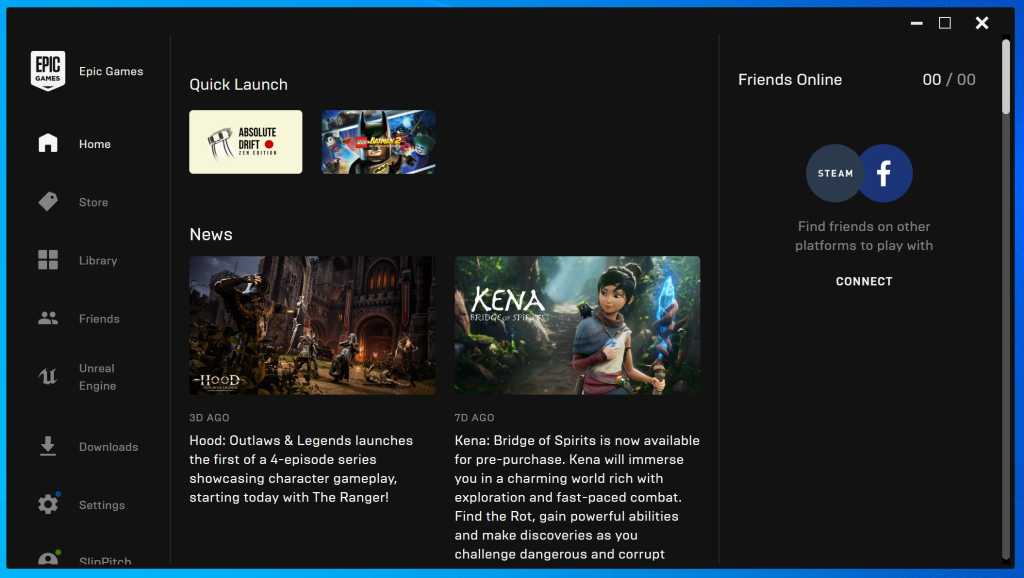 As laptop performance improves over time, you may be excited to discover that the PC you reserved exclusively for Excel and Zoom calls now can serve as a gaming PC, too. But beware: Leaving a game store app like the Epic Games Store open may significantly slice into your laptop’s battery life.

Consider Intel’s latest Tiger Lake H35 announcement. The new CPUs enable a class of ultraportable laptops that wield office apps and Zoom calls by day, then play Destiny 2 or Valorant by night. The problem is that if you buy a game via, say, the Epic Game Store, the EGS app must be running while you play the game. The app remains active once you quit the game, too. As we found, simply leaving the store app in place when you’re not gaming can reduce your battery life by as much as 20 percent, cutting hours off of your laptop’s longevity.

What we found appears to be specific to the Epic Games Store and Intel’s Tiger Lake platform, though the time required for battery rundown tests and the available equipment we had on hand limited our tests. We can say the battery hit that our Tiger Lake platform experienced in conjunction with the Epic Games Store did not extend as significantly to Steam, and we could not reproduce it as extensively on a laptop powered by AMD’s Ryzen processor.

How this all came about

Our discovery was a by-product of testing the Microsoft Surface Pro 7+ tablet, which uses a tablet-class Intel “Tiger Lake” Core processor inside. Who games on a tablet? Good question. As processor and GPU performance increases, more and more platforms are becoming hybrid productivity and gaming machines. Tablets are simply an extreme example.

Because of the incredible leap in graphics performance engendered by Intel’s new Iris Xe GPU, we wanted to test its capabilities in a few games. But we ran into an odd anomaly while testing: The battery life tests we ran didn’t deliver consistent results.

To be clear, the first two results were consistent. PCWorld has traditionally used a video rundown test, where we loop a video over and over until the battery expires. In the case of the Surface Pro 7+, the first two test runs provided consistent results; the third did not.

What had changed? None of our benchmark software, or even the games, ran in the background when not in use. But the Epic Games Store, the service by which we downloaded our games and the service those games required to run, had remained hidden in the taskbar the entire time. Could that have made a difference? As we discovered, yes.

Though we’re using Epic as an example, all we’re pointing out is that your PC can be running any number of background apps at any one time: antivirus, audio enhancements, instant messaging apps, and so on. We typically remove, block, or simply don’t install those apps when we’re testing battery life. Depending upon how well each one is coded, and how active they are, they all can affect your battery life.

We were a little shocked at how profoundly just one app could affect your battery life. To test it, we decided to run a series of scenarios:

In all of the cases, we ran the battery tests in airplane mode, preventing the app or PC from connecting to the Internet. The goal was to emulate what you might do at the end of a long day: play some games, exit out of the game (but not the Epic Game Store app) and then see what effect leaving that app running in the taskbar would have on your battery life at work the next day.

The first two tests—the clean PC versus signed in to the Epic Games Store—were what we were concerned with. The other tests were merely edge cases, simply to see if other behaviors made a difference.

On the Surface Pro 7+ running Intel’s 11th-gen Ice Lake processor, the differences were significant. We performed multiple rundown tests on the “clean” Surface tablet as well as with the Epic Games Store signed in. Battery life dropped by 20 percent on average, reducing the tablet’s battery life by about two hours because of a single app.

We also tried loading the Epic Games Store, but not signing in. (The Epic store remained in our taskbar, hidden in a cluster of other apps.)  Those results fell roughly in line with the battery-life scores we recorded when signed into the Epic store. Finally, we installed the Epic Games Store, then formally exited out of the application. That, fortunately, seemed to solve the problem, and battery life returned to the levels found in our “clean” PC.

We also performed one more check. We uninstalled the Epic Games Store, then performed a similar test with Valve’s Steam store. Would battery life decrease proportionately with Steam, not Epic, running in the background? We tested while signed into Steam, with the app running quietly in our Windows taskbar. As you can see, there was an effect, though not as profound.

We also speculated that, for whatever reason, the battery-life issues could have been tied specifically to Intel’s 11th-gen Tiger Lake platform, the associated chipset, or just the Surface Pro tablet line. As a check, we performed similar tests on Microsoft’s Ryzen-based Surface Laptop 3. (This doesn’t rule out some Microsoft-specific firmware bug that could affect both platforms, but we had to cut off the test somewhere.)

We performed a more limited suite of tests with this laptop, finding that battery life dipped again with the Epic Games Store, and not at all with Steam. (The identical battery-life estimates are a coincidence.)

We contacted Epic with our findings and provided them with the details of our test. “In general, we are actively working to improve the performance and reduce the power consumption of our launcher,” an Epic representative replied via email. “The power consumption varies based on whether the launcher’s window is open.”

Accurately measuring battery life has become more of a challenge over the past few years, because the number of variables has increased. Display brightness, whether Wi-Fi is on, and even the Windows performance slider can affect battery life. What we’re showing here is that a hidden app—even one that you might want to leave open—affects battery life, and even those effects may vary from one CPU platform to another.

So many games now require some sort of overarching game store or monitor application—Steam, GOG, the Epic Game Store, even the Xbox app—to be active when the game runs. But we don’t think of those store apps as the anchor that drags down battery life—we expect the games themselves to do that.

In all, it was a bit of a rude surprise to discover that the Epic Game Store slashed as much battery life off our test tablet as it did. But if Intel and AMD manage to enable laptops that can be used for both work and gaming, consumers are going to have to adapt to the demands of both worlds. In this case, it might mean “cleaning up” your PC for work by shutting down game stores to ensure maximum battery life.