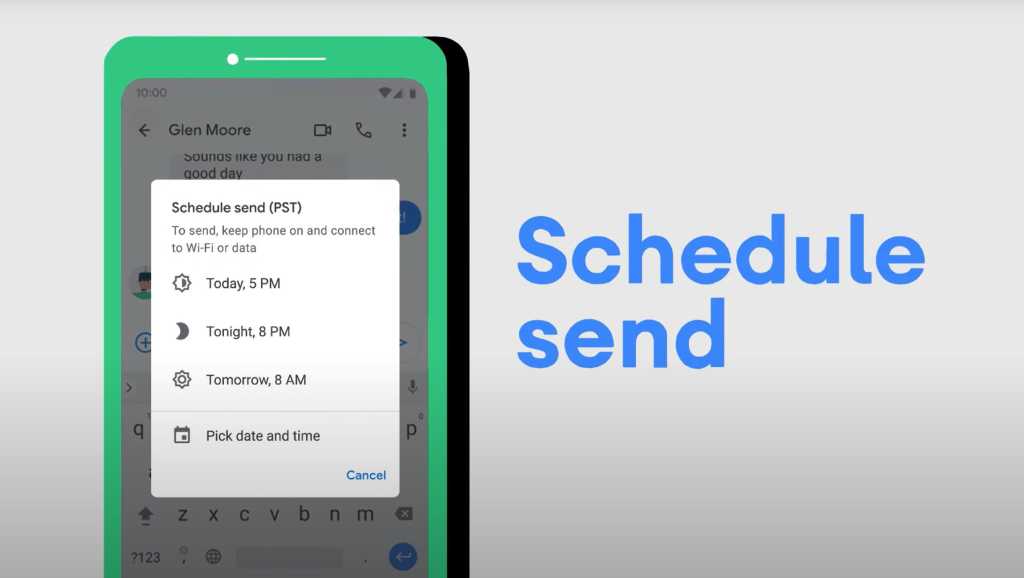 Google said Tuesday that it’s beginning to roll out Schedule Send, a way for you to schedule texts in Android Messages in much the same way you might schedule an email.

Schedule Send is one of several new features Google announced for Android, along with Password Checkup, an improved dark mode for Google Maps, and a few enhancements to Android Auto and Google Assistant.

Google designed the new Schedule Send feature to be simple to use—it’s certainly simple to explain. To trigger it, all you’ll need to do is long-press the Send button in Messages. That will open up the scheduling menu, and you’ll be able to pick a date and time to send your message. You’ll need an updated version of Messages to enable this, as well as a phone running Android 9 and above.

Here’s how the new Schedule Send feature on Android works:

Google’s other Android features may not be as profound, but they’re still useful. Google Assistant, for one thing, now works better when the phone isn’t close beside you, Google said. Assistant is adding high-visibility cards so that your phone can be better read across the room. “To get the most out of Assistant when your phone is locked, simply turn on Lock Screen Personal Results in Assistant setting and say “Hey Google’’ to send text messages and make calls,” Google said in a blog post announcing the new features.

Google’s added an improved dark theme to Maps as well. You can enable an always-on dark theme via the Settings menu, where you can tap on Themes and then Always in Dark Theme to enable it. You can also reverse it with an Always in Light Theme setting.

Likewise, Android Auto has added some entertainment to pass the time while you’re out and about, with games that can be triggered with “Hey Google, let’s play a game.” Games include Jeopardy! as well as trivia, Google said. You’ll need Android Auto 6.0 for these.