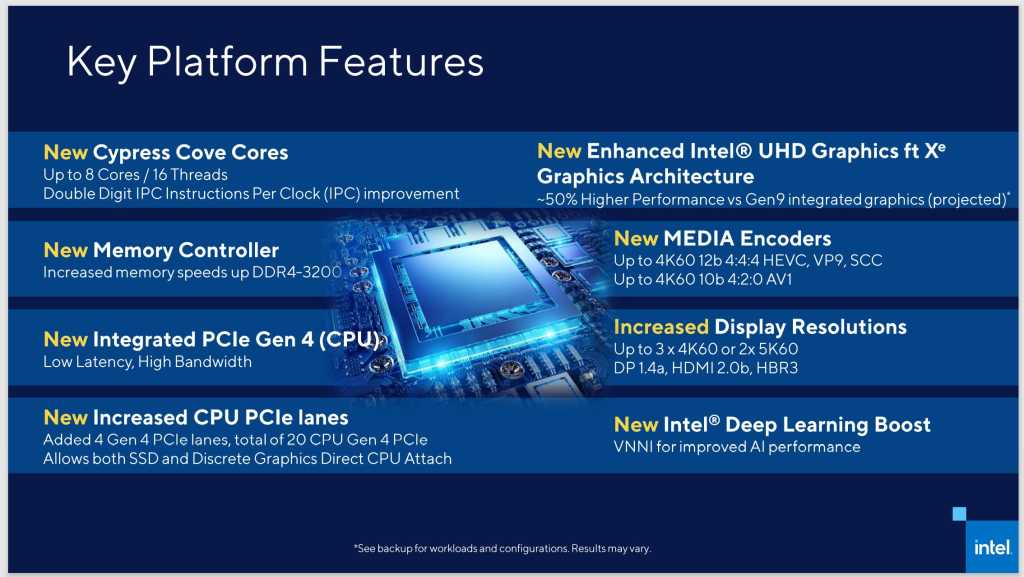 Intel’s 11th gen Rocket Lake-S is still sitting on the launch pad, but the company isn’t wasting any time in promoting it. On Tuesday, Intel teased storage performance results that show a Rocket Lake-S outperforming a Ryzen 9 5950X by 11 percent.

The results were tweeted by Intel’s Ryan Shrout, who works as Intel’s Chief Performance Strategist. You can see the 11 percent delta below.

First let’s describe how the tests were set up, then jump to the “Why does this matter?” section to make sense of it all.

The tests were run by Intel’s Storage Technical Analyst Allyn Malventano, who installed the M.2 Samsung 980 Pro drives in PCIe riser cards to ensure they were running off the CPU’s PCIe 4.0 lanes.

PCMark 10 is best known for its application tests, but its storage tests are popular as well. Unlike typical synthetic tests that may hammer a drive to find its theoretical throughput—all under scenarios that may not match what most people do day-to-day— PCMark 10 is built around trace tests. A trace test basically records a drive usage pattern when using Microsoft Excel, PowerPoint, Adobe Illustrator, and Photoshop, or launching Battlefield V or Call of Duty Black Ops and other applications. That pattern is then replicated on a drive and the performance is recorded.

For Intel’s result, it ran the Quick System Drive Benchmark, which uses traces when writing 339 JPEG files totaling 2.37GB to the drive, reading the same files, and also copying the same files to the drive in a read and write scenario. The Quick System Drive also scores the drive performance using Microsoft Excel, Adobe Illustrator and a light usage scenario for Adobe Photoshop. The test takes about 20 minutes to run its three passes, which write about 23GB of data.

You can see the result of PCMark 10’s Quick System Drive bench below on a Core i7-8665U laptop. The resulting bandwidth is fairly low for a test, but PCMark 10’s tests are focused on real usage patterns. This as opposed to blasting a drive with data to find its saturation point.

Why does this matter?

Because PCMark 10’s Quick System Drive test is designed to measure a drive’s performance, not a CPU’s performance, Intel’s flex is likely meant to show the company’s depth and breadth in areas other than pure CPU performance.

With both the Ryzen 9 5950X and Core i9-11900K using the exact same 1TB Samsung 980 Pro drives in PCIe 4.0 mode, an 11 percent advantage might indicate driver optimizations, board BIOS optimizations, and better PCIe 4.0 implementations.

It might also show that being last to PCIe 4.0 helps too. Early implementations of new technology rarely end up being the best optimized. So Rocket Lake arriving to PCIe 4.0 almost two years behind AMD might be serving it well.

Of course, this isn’t the first time Intel has claimed a performance advantage over its arch nemesis. During a virtual 2021 CES session, Intel showed off results indicating Rocket Lake 11th gen was faster than AMD’s Ryzen 9 5900X in gaming.

Should you believe it?

Any time a vendor makes performance claims, you should always be skeptical—after all, who shows off tests that make them look worse? However, don’t make the mistake of dismissing all of this as “fake benchmarks.” It’s unlikely these are fake. And while they may be “cherry-picked,” it’s best to wait for a full view of a new product from multiple independent reviewers. Then you can make informed decisions.