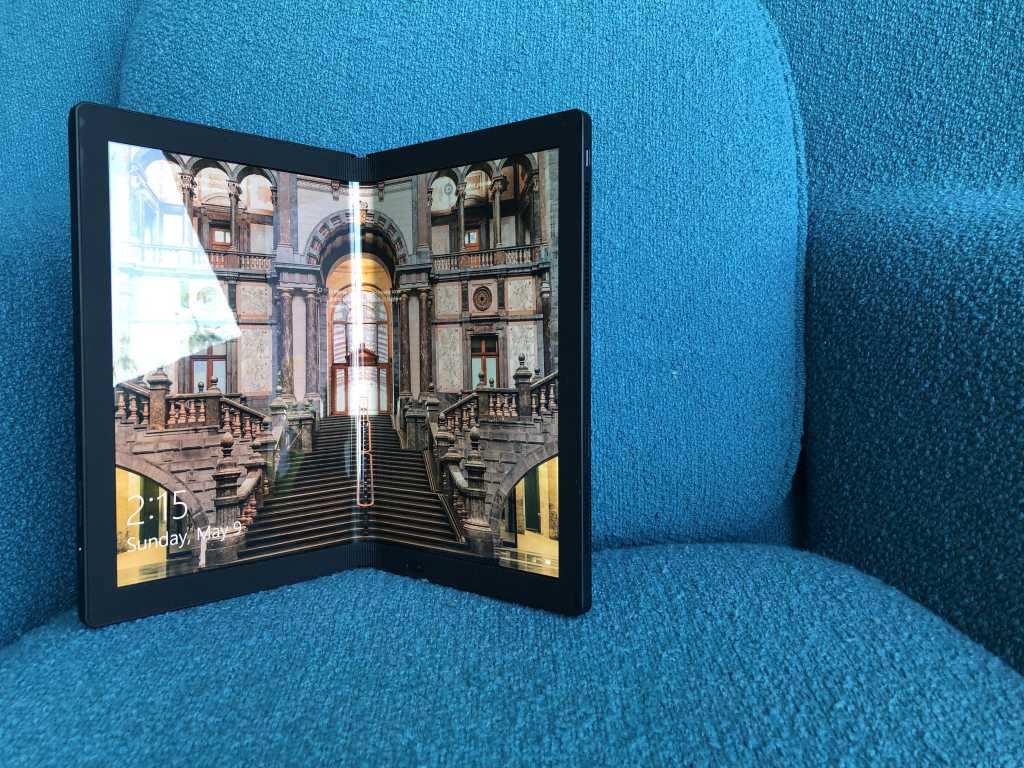 Open confession to Lenovo: I still have your ThinkPad X1 FoldRemove non-product link. I promise I’ll send it back soon. Apologies for the delay, but what I thought would be a brief examination of your innovative foldable PC turned into a longer exploration of how this ultra-mobile device changed how I worked—at a time when I didn’t go anywhere.

After all, who’d have thought that the world’s first foldable Windows PC, a design intended for businesspeople on the run, could prove equally useful for someone who sheltered in place for months on end? Sure, the ThinkPad X1 Fold has its limitations. But the combination of the folding display and the detachable keyboard offer a versatility that’s made my work-at-home life surprisingly easier.

Why the ThinkPad X1 Fold is unique

Let’s recap the basics of the ThinkPad X1 Fold. Announced at CES 2020 (in those last, innocent weeks before the United States went into pandemic lockdown), it is still the world’s only foldable PC.

The device consists of a 13.3-inch, QXGA (2048×1536), 300-nit foldable OLED display, with a full-fledged PC crammed underneath it. The ThinkPad X1 Fold is sheathed in black leather, including its fold-out kickstand (which is cunningly dyed ThinkPad-red underneath, like Christian Louboutin heels).

What makes the ThinkPad X1 Fold completely unique among PCs, of course, is its foldability. Lenovo says its engineers spent years developing the complicated hinge mechanism, which allows the display to unfold from a book-size object (measuring about 9.3 by 6.23 x 1.09 inches, per Lenovo) into a half-open book or clamshell shape, or spread flat to be used as a large tablet.

Lenovo worked hard to make sure the screen didn’t crease or develop air bubbles with repeated folding. When spread out flat, you can see a ghost of a double crease in the middle of the ThinkPad X1 Fold’s screen. You have to look hard. When the display is folded into clamshell mode, you can see a slightly lighter area demarcating the double-crease. It’s not bothersome.

Inside is an Intel Core i5-L16G7 CPU, a hybrid Lakefield CPU designed for thin, light PCs. This is a low-power chip. It can’t play Crysis. But my unit is running 64-bit Windows 10 Pro, and I have my characteristic 20-plus browser tabs going for work and research, and the CPU is holding up its end. The only time I noticed the ThinkPad X1 Fold getting rather warm and throttling a bit is when I attached a USB-C hub to connect ethernet and HDMI.

Lenovo did an impressive job with the display technology and the packaging, so it’s no surprise that this is an expensive investment. The tablet alone is $2,499 from Lenovo, while a bundle with keyboard and pen is $2,799 from LenovoRemove non-product link. (A Lenovo Fold Mini Keyboard would otherwise be $229 from Lenovo, while the Lenovo Mod Pen would be $99 extra). But remember, this is the only PC that folds!

I doubt my stuck-at-home/work-from-home situation was something Lenovo considered when it developed the ThinkPad X1 Fold. Even I didn’t consider it, at least not as a long-term situation. We at PCWorld often suggest that people who use their PCs only at home could use a desktop, or tolerate a heavier laptop. We bemoan the lack of a large display when we’re on the road.

As the need to isolate dragged on, however, my perspective changed. I spent a fair amount of time with my laptop tethered to a full display. But sometimes I had to take my PC to the kitchen, the living room, the den, or my office space. Making this circuit with my 14-inch daily driver was getting to be a drag. The laptop was too heavy and warm to have on my lap. Anytime I couldn’t snag a hard work surface, I was balancing it unsteadily on a book on top of a pillow.

The ThinkPad X1 Fold’s magic formula is its many modes. Every time you unfold it, the onscreen Mode Switcher pops up to confirm how you wish to use the display—whether as a split screen or one large image. You can also summon the Mode Switcher anytime using an icon in the taskbar.

As a small clamshell, the ThinkPad X1 Fold sat lightly on my lap and let me do basic things like answer email and browse the web easily. I could use the on-screen keyboard, or attach the Bluetooth keyboard, on the lower half of the clamshell. The leather exterior felt good in my hands and didn’t slide off my lap like hard plastic or metal do.

As a small display, I could set it up on a surface and position the Fold Mini Keyboard somewhere nearby where it was comfortable for me. When I had access to a full-size display, I could attach a hub to one of the ThinkPad X1 Fold’s two USB-C ports and get a desktop-like experience, with the X1 Fold as my second display.

Devices this compact always have limitations, of course. The two USB 3.2 Gen 2 (SuperSpeed 10Gbps) Type-C ports are great, but you can’t use them both simultaneously unless you stand the display upright (portrait mode). When in portrait mode, the kickstand on my unit tended to slide out of place a bit, as if the weight distribution were a bit off-kilter. It had no such problems when the display was oriented in landscape. Lenovo confirmed that the kickstand was really meant to be used only in landscape mode.

The Fold Mini Keyboard is an essential accessory unless you really love typing on a screen. You could use another Bluetooth-connected keyboard, but the Fold Mini is the only one that you can tuck into the middle of the ThinkPad X1 Fold for easy transport. Some keyboards this flat have an inferior typing experience, but I’ve used it comfortably for hours at a time. To save space it squishes up to four characters on some side keys, however, forcing you to hit the Fn key and sometimes also the Shift key to use a certain character. I can see this driving a touch typist crazy. I’m not a touch typist, but I created a lot of typos as I aimed for buttons that weren’t actually there.

The ThinkPad X1 Fold has already made me look at my traditional laptops differently. They have more horsepower, but this lightweight, foldable PC does a better job than they do at the mobility part of computing, fitting easily into small spaces or spreading out a bit when you have more room.

The only killer feature this device doesn’t have is LTE. There’s a blocked SIM slot, but this feature isn’t available yet on shipping models. Once it’s available, the ThinkPad X1 Fold could be the best PC to take anywhere, whether you’re running for an airplane or curling up on the couch.