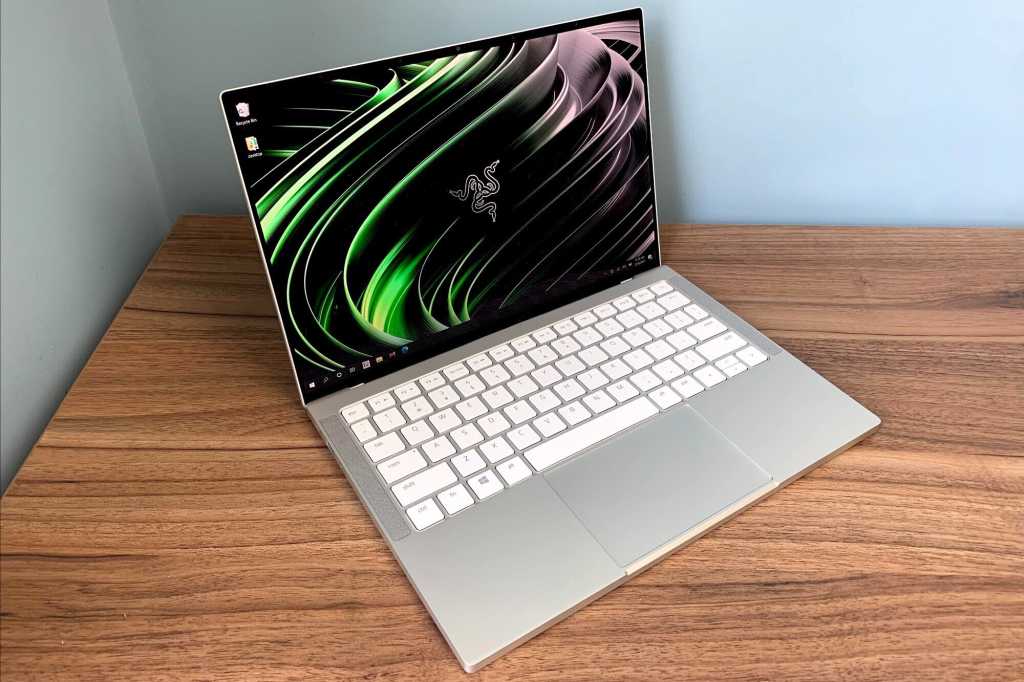 If not for the mushy keyboard, our complaints about the Razer Book 13 would be relatively minor. We wouldn’t even mind paying more for slick design and no bloatware, especially given the solid overall performance. Paying more despite a surprisingly subpar keyboard, however, is a much tougher sell.

The Razer Book 13 is a classic example of why you shouldn’t judge a book by its cover.

This is a gorgeous laptop to behold—a sharp-edged slab of aluminum with a 16:10 display, slim bezels, and a generously-sized trackpad. It has Intel’s latest 11th-generation Core processor, face recognition, and not a trace of pre-installed bloatware. At a glance, you might think it commands every penny of its asking price.

And then you start writing on it, and the whole experience comes squishing down—on its mushy, imprecise, low-travel keyboard. The Razer Book 13 could be a pretty good high-end laptop, but it’s hard to recommend for anyone who spends a lot of time typing.

The Razer Book 13 that we reviewed ($1,600 on Amazon, also available from Razer) includes the following tech specs:

Configuration options are limited. A non-touch model with a Core-i5 processor, 8GB of RAM, and matte display is available for $1,200 exclusively from RazerRemove non-product link, or you can opt for a 4K screen and 512GB of storage for $2,000 from AmazonRemove non-product link (or Razer). But if you don’t want 4K, whether for its high price or excessive power consumption, you’re stuck with 256GB of storage, which feels skimpy on a laptop in this price range.

With the Razer Book 13’s silver aluminum finish and 16:10 screen aspect ratio, some comparisons to Apple’s MacBooks are probably inevitable. Razer’s laptop has some key points of distinction. The keyboard is white instead of black—I think it’s a better complement to the light-silver trim—and is flanked by speaker grilles.

Razer also uses sharp edges all around the laptop, and the rubberized outer display hinge gives the keyboard section a slight lift when it’s open. Of course, there’s no mistaking Razer’s triple-headed snake logo on the Book 13’s outer cover. The laptop is otherwise logo-free, which is a nice change of pace from so many other Windows PCs.

Also nice: The Razer Book 13 is yet another laptop that breaks from the trend of 16:9 screens, with a resolution of 1920×1200 instead of the usual 1920×1080. That means you get a bit more vertical space for documents or webpages. The viewing angles on this IPS display are also excellent, though at times the level of contrast can seem low. (This is more an issue with Intel’s display drivers than with Razer’s hardware, and can be addressed by turning off some power-saving features in Intel’s Graphics Command Center.)

Here’s where things get ugly. I’ve had the pleasure of reviewing many high-end laptops in recent years, and the Razer Book 13 has by far the worst keyboard I’ve used on any of them. Typing on this laptop has been a non-stop headache, due to stiff keys that often fail to register a keystroke if you don’t type slowly and deliberately.

The core issue is that the Razer Book 13 can easily miss keystrokes unless you press down around the center of the key. I type pretty quickly, and while it would feel like I was hitting each key, my fingers didn’t always land with the accuracy that Razer requires. That meant I frequently had to go back and correct mistakes. The Razer Book 13’s somewhat rigid keys and low travel compound the problem, as does its perplexingly mushy spacebar.

Granted, keyboard preference will always be somewhat subjective—that’s why so many types of mechanical key switches exist, after all—but I’ve never been as frustrated with a laptop keyboard as I was with the Razer Book 13. Between the coronavirus pandemic and no apparent brick-and-mortar store availability, you may not be able to try this laptop before you commit to its keyboard.

One other caveat: The Razer Book 13 includes per-key RGB lighting, which is the laptop’s clearest nod to Razer’s gaming roots. Unfortunately the default setting is a pulsating pattern that cycles through the entire color spectrum. To me, it’s tacky, and they only way to change it is through Razer’s Synapse software. The lack of simple keyboard shortcuts to control lighting modes and patterns just adds to an already frustrating experience.

At least the Razer Book 13’s trackpad is pretty good, providing a broad glass surface on which your fingers can glide. While the clicking mechanism gets stiff toward the top like in most Windows laptops, the trackpad surface is taller than what you’d find on laptops with 16:9 aspect ratios.

The Razer Book 13 has a 720p webcam that’s pretty much in line with what you’ll find on other Windows laptops. It’s good enough for videoconferencing in well-lit areas but nothing special overall, and it lacks a privacy shutter. For sign-in, the camera has infrared sensors for Windows Hello face recognition, but there’s no fingerprint reader for those who’d rather sign in without getting cameras or PIN codes involved.

Speaker quality, meanwhile, is also just average despite Razer’s boasting of “THX Spatial Audio” and “7.1 surround sound.” The laptop has speakers on either side of the keyboard, and while they get reasonably loud, they don’t offer much bass response and sound a bit muddled overall. That said, the Razer Book 13’s microphones produce audio that’s both loud and rich, so you’ll sound great on your next Zoom call.

The Razer Book 13’s performance is about what you’d expect for a laptop with an Intel Core i7-11G5G7 processor and 16GB of RAM. It’s plenty fast for everyday productivity tasks and gets decent battery life, and you can get away with some light 3D gaming if you keep expectations in check. The Razer Book 13 also has a cool and quiet design that doesn’t get excessively uncomfortable in your lap, even while playing games.

The Razer Book 13 also performed well in our HandBrake test, which looks at how long the laptop takes to encode a large video file. Razer’s laptop got the job done in 49 minutes and 37 seconds, about five minutes faster than Acer’s Swift 5 and Dell’s XPS 13 2-in-1. Because the Razer Book 13 isn’t a convertible design and isn’t trying to be exceedingly thin or light, it’s no surprise to see it hold up well in this CPU endurance test.

Cinebench is more of a mixed bag. While it earned an impressive score of 227 for single-threaded performance, the multi-core performance score of 843 is a bit behind that of some other laptops with similar specs, including Acer’s Swift 5 and Dell’s XPS 13.

Keep in mind here that Razer’s Synapse software offers a few different performance settings, and we test the default for our benchmarks. Switching the Razer Book 13 to “Performance” mode brought the multi-threaded score closer to 900, so consider flipping the switch if you juggle a lot of browser tabs or spend lots of time encoding videos.

As for gaming performance, 3DMark’s Time Spy test shows performance roughly in line with that of other laptops powered by Intel’s Iris Xe graphics. It’s somewhat surprising to see MSI’s Prestige 14 so far ahead of the pack here, but you’d expect the Razer Book 13 to land a bit behind the discrete Iris Xe Max GPU in Acer’s Swift 3x.

In practice, the Razer Book 13 was able to handle 3D games with mixed results. EA’s Star Wars: Squadrons ran smoothly at 1080p on medium to high settings, while Apex Legends fell closer to 30 frames per second at 1080p, which console gamers might still find tolerable. Fortnite, however, was practically unplayable due to constant stuttering as it loaded distant environments. This was surprising given that Acer’s Swift 5 handled Fortnite at 1080p on medium settings with aplomb.

If not for the keyboard, our complaints about the Razer Book 13 would be relatively minor: Storage is skimpy unless you spring for the 4K version, there’s no fingerprint reader, and speaker quality could be better. While the laptop is pricey given its tech specs, paying more for slick design and no bloatware isn’t an outrageous prospect. Paying more despite a subpar keyboard, however, is a much tougher sell.