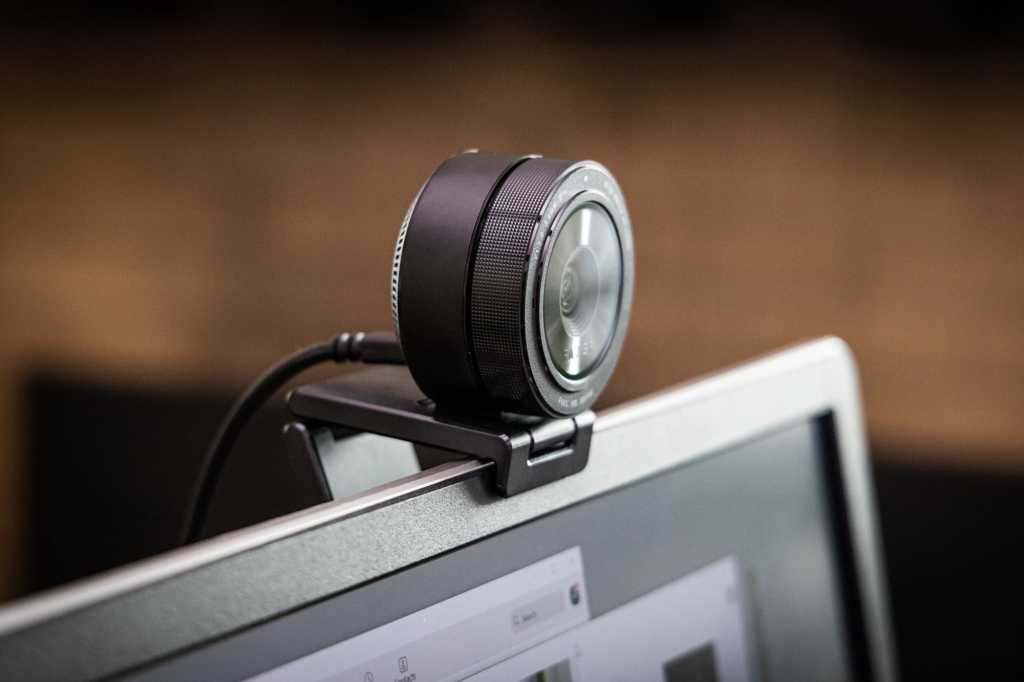 The Razer Kiyo Pro is an improvement over the original Kiyo in almost every way. It’s a fantastic webcam that does struggle a bit with autofocus, but the image performance is top notch.

The Razer Kiyo Pro webcam is impressive. While the specs—1080p, 60fps—don’t look like anything on paper, the combination of software and hardware equal a device that I have no problem recommending—despite its high price. At $200 you might wonder how much better it could be compared to more budget-friendly and classic options like the Logitech C920, so let me tell you: Under most circumstances—whether you are hosting a Zoom session or streaming video games to the world—the quality surprised me.

The Kiyo Pro ships with a nice, 1.5-meter braided USB 3.0 cable. The cable connects to the webcam via USB-C, and to your PC via USB-A. It’s thick and long enough to handle most setups, but more importantly, it’s replaceable in case you need something thinner or shorter. Another bonus in the box: a plastic privacy shield for covering up the camera when it’s not being used.

The design is impressive. The camera itself is considerably larger than the original Kiyo by every metric, and that makes it feel much nicer and more substantial—a real high-end piece of gear.

It also features a wide variety of mounting options, a treat for those who like to customize their setup. The included monitor mount has two points of vertical articulation and features a 1/4”-20 standard tripod mount to screw into most consumer-grade tripods. Don’t want to use the included mount? The camera itself is screwed to the mount via that same 1/4”-20 port, making the Kiyo Pro one of the most versatile webcams I’ve seen.

The Kiyo Pro connects to the PC via the standard UVC protocol, meaning almost any program will get easy access to the camera. My two main applications for testing were Zoom and OBS, both of which had no problem bringing the camera online. While each program has a different toolset for adjusting the video capabilities of the Kiyo Pro, the easiest way to configure it is via Razer’s Synapse software. Inside Synapse you have access to all the tuning options your heart desires, as well as some quick presets.

Unfortunately there seem to be a couple of configuration options that have to be set inside Synapse: HDR and field of view (FOV). Out of the box, my Kiyo Pro was set to SDR, and the FOV was set to its widest angle. SDR vs HDR depends on your lighting setup, which I’ll cover later, but at its widest FOV (103 degrees) there is considerable fisheye distortion to the image. While I’m glad the option is there in case I need to fit more people in the frame, I primarily use the camera alone, and it looks its best when set to the narrowest option (80 degrees).

For our webcam tests, we compared the Razer Kiyo Pro against these competing models: Razer KiyoRemove non-product link, the cheaper (and older) sibling; Logitech C920, the immensely popular and widely used webcam; and the ClearOne Unite 50 4K AFRemove non-product link, a professional-grade webcam aimed at those larger workspaces. We’ve organized them in the included YouTube videos clockwise top left to bottom right: first the Razer Kiyo, then the Razer Kiyo Pro, Logitech C920, and the ClearOne Unite 50 4K AF.

Teleconferencing has become an everyday activity, and most people use the natural light they have available to them. The camera used is important—it’s literally the window through which the people on the other end see you. You want to be seen clearly, be properly exposed, and be framed at a proper angle—all things at which the Kiyo Pro excels.

Let’s start with clarity—the sharpness of the image coming out of the Kiyo Pro, and how it compares to other webcams. The embedded videos were recorded at 4K, with each camera taking up a 1080p rectangle, running at 30 fps, with default settings. Transmitting video over the internet is always going to require some compression. I chose to post this footage to YouTube, which performs its own compression to the image.

Natural lighting is where most webcams excel, so this is one of the best-case scenarios for any webcam. Fine details like my shirt, the hairs in my beard, or the individual record spines show that the two Razer cameras easily edge out the Logitech C920 in clarity. With these default settings it appears that Razer adds post-processing sharpening in order to achieve this stand out performance—which is not necessarily a bad thing.

When it comes to exposure, the original Kiyo and the C920 both tend to blow out bright spots like white walls. More problematic is when skin is overexposed, leading to unflattering white spots on your face. The Kiyo Pro and the Unite 50 both offer a better exposure, but the ClearOne is too flat in its default configuration, and is a tad underexposed for my liking. This can be corrected in the settings, but it’s interesting to see how these cameras handle themselves right out of the box.

I’m the most impressed by the Kiyo Pro overall, as it usually provided a proper exposure and it’s not losing much information in the brightest or the darkest parts of the image. I’ll note that this isn’t even with HDR on. In most lighting scenarios like this, it’s best to stick with SDR.

The next natural-light test is a worst-case scenario, where there is strong backlighting. This is one of the hardest things for any camera to balance, as it struggles to keep valuable information in both the brightest and darkest parts of the image. Most cameras in auto mode will have to lean toward one of the extremes, which makes faces either too dark or completely washed-out.

Even with the Kiyo Pro’s HDR mode enabled it can’t perform miracles, but it does by far the best job at exposing for the highlights while still maintaining some light on the subject. In these situations it’s best either to add light or to tweak settings. While each camera can be tweaked to a certain degree, the Kiyo Pro has the most exposure information to work with. With that said, no one should do any serious video work with a backlit setup.

One thing that is noticeable in extreme lighting situations is autofocusing performance. Both of the Razer webcams struggle with focus hunting—which is when the camera does a visible ‘breath’ in order to find what it should be focusing on. The original Kiyo has always had this problem, even in well-lit scenarios. The Kiyo Pro’s performance is better, though still not great.

For those needing a webcam for stream, such as to Twitch, it’s important to see how a camera will perform in staged lighting setups. While my house isn’t as complex in terms of lighting as it would be for professional streamers, my background as a video director helps me understand how it would perform in most streaming scenarios.

In these types of setups there is usually a main light illuminating the subject, with some (often colored) accent lights in the background. As with backlighting, each camera has to decide which parts of the image it should expose for—the more complicated the lighting, the harder it becomes.

This scenario tends to trigger focus hunting on the Kiyo Pro. When it happens it’s very distracting, and even problematic when you are trying to maintain a level of quality on a stream. I’m not sure which autofocus system Razer employs but it’s most likely something that can’t be solved by a patch.

If you can surmount that problem, the Kiyo Pro performs well otherwise. It is a bit underexposed in the default mode, but at least it keeps my face evenly lit. (Many webcams brighten the image too far, which results in bright spots on the face.) When HDR is enabled, however, the Kiyo Pro balances the lighting like a champ. It’s a bummer that it seems to be triggerable only within Razer’s Synapse software.

What the Kiyo Pro can accomplish in low light is fantastic. Thanks in part to packing an image sensor that is used in security systems, the Kiyo Pro delivers an image with minimal noise and more accurate color reproduction.

In auto-mode the original Kiyo exhibits a lot of contrast in its image, which is only compounded when used in low-light conditions. Its built-in ring light (which acts more like a spotlight in practical terms) helps—and it’s a unique feature that most other webcams still don’t have—but the spotlight-like look it creates, is not for everyone.

The new Kiyo Pro trades out the built-in light for a larger, more sensitive sensor. Without getting into the technical particulars of why, most small-sensor cameras (like those found in smartphones) break down in low light, affecting the camera’s ability to portray color accurately, for instance. In this department the Kiyo Pro does impressively well. Not only is it accurate, it also doesn’t tend to add too much contrast the way the original Kiyo did.

In more practical terms, the Kiyo Pro is also able to present a usable exposure with minimal noise. It is a fairly noisy image, especially compared to the other cameras we tested, but it’s mostly relegated to the shadows.

This is another scenario where SDR is typically going to perform better than HDR. HDR is very effective at protecting against blown-out highlights, but in low lighting you actually want to use those highlights to give a better exposure. Like backlit scenarios, I’d like to hope that nobody is doing serious work in such situations, but if push came to shove I’d prefer using the Kiyo Pro.

The Razer Kiyo Pro is one of the best webcams I’ve ever used. Its high-end hardware and easily workable software traits make it an easy recommendation, as long as you can swallow the $200 price tag. It strikes a sweet spot for those wanting an easy-to-use camera that looks great without having to take the next step to invest in a DSLR. Apart from the well-hidden HDR toggle and occasional focus-hunting, there is little to dislike. It’s a viable option for those seeking to up their Zoom game, or to have a simple, reliable, and great-performing solution for Twitch streaming.