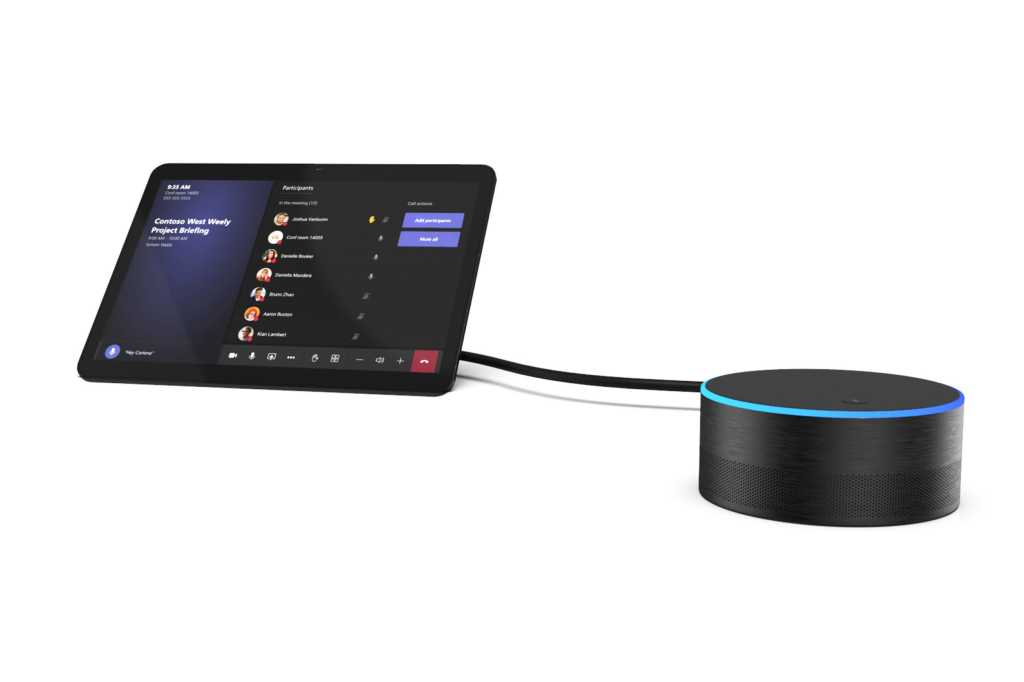 Microsoft’s determined march to make Microsoft Teams the dominant platform for online videoconferencing and collaboration continued on Tuesday with new presentation modes for Teams, certifications for new Teams monitors, and even a formal announcement of intelligent speakers that can be used to supplement Microsoft Teams.

Microsoft’s emphasis this time around is assisting presenters who are sharing content within Teams. In January, Microsoft quietly announced Presenter View within Microsoft Teams, allowing the presenter to see the slide in question, the speaker notes, and a navigational timeline—all while the viewers simply saw the slide in question. Now a feature called PowerPoint Live will allow the presenter to customize what the audience sees, too, with notes, slides, meeting chat and participants all in a single view.

The related Presenter Mode is slightly different. Here, Microsoft is taking cues from the oddly named Mmhmm and related apps, and allowing presenters to configure how their presentations look on the screen. Three Presenter Modes are en route: Standout, which puts the speaker in front of the shared content; Reporter, which pops the content above the presenter’s shoulder like a newscast; and Side-by-side, which shows the content in a separate window. Standout will be first to arrive this month, Microsoft said. If they choose, presenters will also be able to prevent their audience from showing themselves on video as a disciplinary tool to prevent disruptions.

Microsoft said that what it’s calling Teams Connect—the ability to construct dedicated channels for those outside your company, like Slack does—is in private preview. Further, Teams is adding full end-to-end encryption for direct 1:1 Teams calls between two people, and invite-only meetings controls, ensuring that only invited guests will be permitted to attend.

In September, Microsoft announced Microsoft Teams-certified intelligent speakers, which would serve as supplementary mics to help identify speakers during a meeting and transcribe what they say. The company identified EPOS and Yealink as partners at launch. This week, Microsoft will say only that the speakers will be available in private preview later in 2021, capable of identifying up to ten separate people in meetings with the seven-mic array. In some sense, it sounds like an optimistic bet that remote workers will be heading into conference rooms before the year is out.

Your company may go passwordless

We all hate changing passwords (especially the need for long, complex passwords) even if we can avoid using them with stored credentials. Microsoft is taking this a step further with Microsoft Azure Active Directory (Azure AD) passwordless sign-ins, which are now generally available. If you have a company PC with Windows Hello, or a security fob, Microsoft can do away with passwords entirely. (A new Temporary Access Pass app, in preview, can allow recovery of a passwordless credential.)

Microsoft is adding a new “calendar board” view to Outlook, specifically the version designed exclusively for the web. The new board view resembles Outlook’s current view, but it appears to break out the various elements—the monthly calendar view, contacts, and so on—into different “cards” that fill up the available space on the user’s display.

Last month, Microsoft announced Viva, an “employee experience platform” that appears to replace your company’s intranet. Viva Connections, the personalized “front page” feed, will be released this month. Viva Learning, the gateway to online education, is due to be released in public preview in April. That’s when Microsoft will add the ”virtual commute” experience it announced last year.