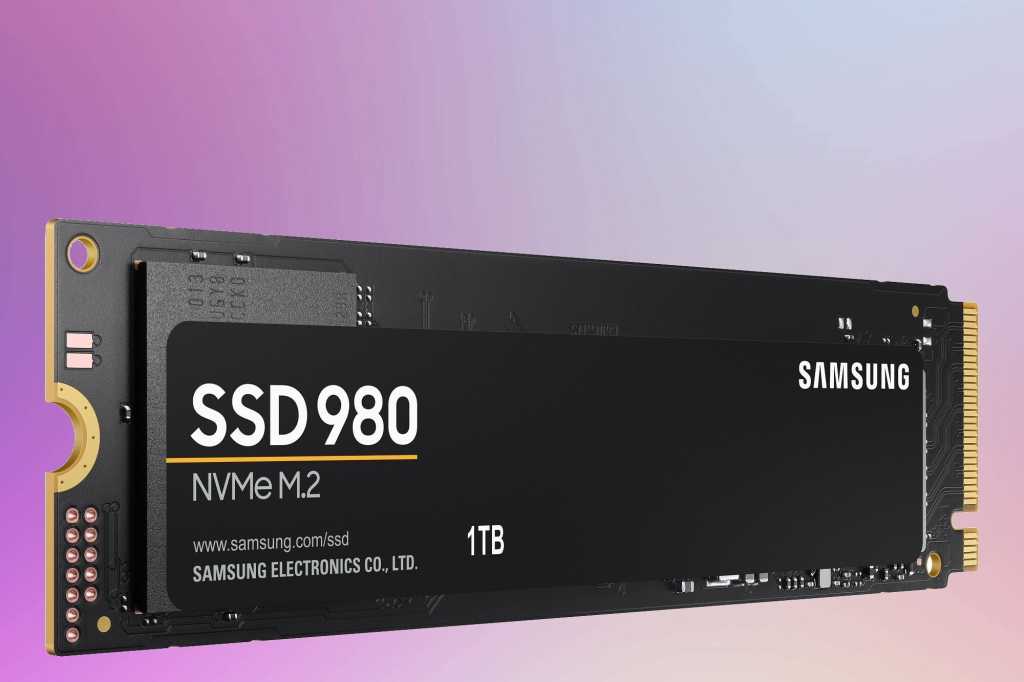 The Samsung 980 is affordable, but it’s no barn-burning Samsung 980 Pro. The 980’s reliance on system DRAM as its primary cache results in significantly slower random file performance. If your needs are simple this may not be an issue, but other drives don’t have this limitation.

The Samsung 980 NVMe SSD may share a naming convention with its cousin, the 980 Pro, but the company may cause some confusion by associating the two. The mighty Samsung 980 Pro is the fastest end-user NVMe SSD we’ve ever tested under just about any kind of load. The 980, while super-affordable, at times resides at the opposite end of the performance spectrum.

The likely reason? The 980 uses your system’s memory as its primary cache, rather than integrating its own DRAM. While it offers decent performance under normal, light use, it suffers major issues with random 4K performance when you bang on it with multiple threads or large amounts of data. If your storage needs are simple this may not be an issue, but we’ve tested similarly affordable drives without such limitations, such as the SK Hynix P31 Gold that’s currently our favorite NVMe SSD.

Making the bargain pricing possible is the 980’s aforesaid DRAM-less design. Instead of incorporating a DRAM chip on the drive, it uses HMB, or Host Memory Buffer, which simply deputizes your computer’s DRAM to be the SSD’s primary cache. It’s part of the NVMe 1.2 spec, but it has never caught on.

Samsung also saves money by skipping support for PCIe 4.0. The vast majority of computers are still using PCIe 3.x. But with Intel finally on board the 4.0 train, and AMD two generations in, 3.x-only leaves potential future performance gains on the table.

The 980 uses the common 2280 (22mm wide, 80mm long) form factor, and is single-sided. That makes it quite suitable for upgrading thinner laptops that might not accommodate a double-sided drive. The controller is an in-house Samsung design, and the NAND is what the company refers to as 100+ layer TLC.

Samsung tends to be very, well let’s just say shy, about sharing hard facts concerning its technologies. But it does say that there’s 40 percent more capacity than with its older 90+ TLC (everyone else’s 96 layers), so this TLC sports considerably more than 100 layers. It fits 1TB onto a single chip. Good enough.

Samsung also claims about half the power draw of the 970 EVO, which could be of major benefit to laptops. Unless of course, those power savings are negated by increased power draw by the system DRAM being used for primary cache.

Samsung also touts its new Intelligent TurboWrite 2.0 secondary caching scheme/algorithm. The company claims it allots three times more NAND for secondary cache on average than with the 970 EVO. Our testing confirmed that.

The 6.3 version of Samsung Magician software allows you to tweak the performance of the 980 drive by allowing it to run full-tilt, or throttled to save energy. If you recall this software because it was used for RAPID host caching on the EVO series, sorry: The 980 doesn’t support RAPID.

The 980 is warrantied for a full five years with a TBW rating (TeraBytes that can be Written) of 300TBW for every 500GB of capacity. That’s about average until you hit the top tier, and far more than the drive is likely to see in ten years let alone five.

Entering the 980’s initial test numbers into our tracking spreadsheet was a somewhat startling experience. After all, this is industry leader Samsung, maker of the fastest SSDs on earth. Sustained throughput: check. 48GB real world transfers: all good. Random 4K performance single-thread: meh. Random file performance with multiple threads… Whoa! That can’t be right. Worse than a top SATA SSD? Double-check, re-test. Does it perhaps require Samsung’s software-based RAPID? No. Well, I’ll be.

The results shown below are a bit of a train wreck for an NVMe SSD, at least one that’s going to see even a moderately heavy workload. But while the first chart’s story appears bleak, the performance story is actually far more nuanced, and not quite as bad as it first appears.

The 980’s results shown above are about average for a SATA SSD. Yowser. If I had stopped with our standard CrystalDiskMark 6 and AS SSD tests, which use 32GB and 10GB data sets, I might’ve misreported the story as such. But as HMB was involved, a little bird said try smaller data sets, and I did. Aha!

With only 1GB data sets, both synthetic benchmarks returned much higher random numbers.

Performance dropped quickly as the amount of data used in the test increased, but that does tell you that under normal use, the 980’s single-thread random performance is workable. Most everyday tasks and programs are single-threaded and will rarely throw more than 1GB of data at the drive.

Moving on to sustained throughput, you can see below that it’s not an issue with the 980 during most transfers.

As you can see below, the 980 was quite competitive in our real-world 48GB transfers as well. These prove that Samsung is truly employing more secondary cache than they did with the 970 EVO/EVO Plus, which was very meager in its allotment.

On the other hand, the 450GB write (seen below), wasn’t great. This is a TLC drive, and it will have to switch to native 3-bit writing eventually. But while the 980 beat the 970 EVO Plus, that’s again because the EVO runs out of cache far sooner. The EVO’s off-cache speed is approximately 900MBps, nearly double the 980’s 475MBps.

Note that the Kingston KC2500 is an exception to the budget rule in the 450GB write test. Most budget drives experience the same drop-off as the 980 and post similar or worse times.

Below you can see the actual drop-off point during the 450GB write on the 980 (empty drive), plus an odd slow start that we rarely see. TurboWrite 2.0. Hmm.

As performance foibles make me curious, I decided to keep investigating. We normally run our tests on an empty drive, then run CrystalDiskMark 6 after the 450GB copy to see if performance drops off at all. Usually there’s no drop, or it doesn’t occur until the drive is filled to somewhere around 85 percent to 90 percent of capacity.

With the 1TB 980 only half full, CrystalDiskMark 6 sustained write performance dropped to 415MBps. The 48GB single file write dropped to that halfway through as well. Perhaps we didn’t give TurboWrite enough time to figure things out, or rewrite the cache data to the main NAND.

Not to pile on, but AS SSD 2 clocked the 980’s write seek at over 0.6 milliseconds in its 10GB test, by far the slowest we’ve seen for any NVMe SSD. That’s also about 200 times slower than average and twice as slow as most SATA drives. The write seek with the 1GB AS SSD test was a normal 0.03 milliseconds.

As most of the 980’s issues are random-access-related, specifically multi-threaded, I installed Windows 10 on it for further testing. Under normal use, single-tasking operations—opening programs, browsing the web, playing a movie, etc.—it was fine. However, with just a few disk-oriented tasks running simultaneously—encoding a movie with HandBrake, unzipping a file, and playing a movie—there were major slowdowns, stalls, and all the signs of overloaded I/O. You have to stack a lot more tasks to slow down most NVMe SSDs.

I appreciate Samsung’s leveraging of a rarely used NVMe feature (HMB) to reduce costs and save everyone money. The 980 does that, and you might be perfectly happy with it if you single-task with light stuff like web surfing, email, word processing, watching a movie, and so forth.

But if you’re going to throw even a moderately heavy workload at your computer, especially if it involves multi-threaded I/O, avoid the 980. (Not the 980 Pro, to be perfectly clear). I never thought I’d use the words Samsung and avoid in the same sentence. Crazy times.