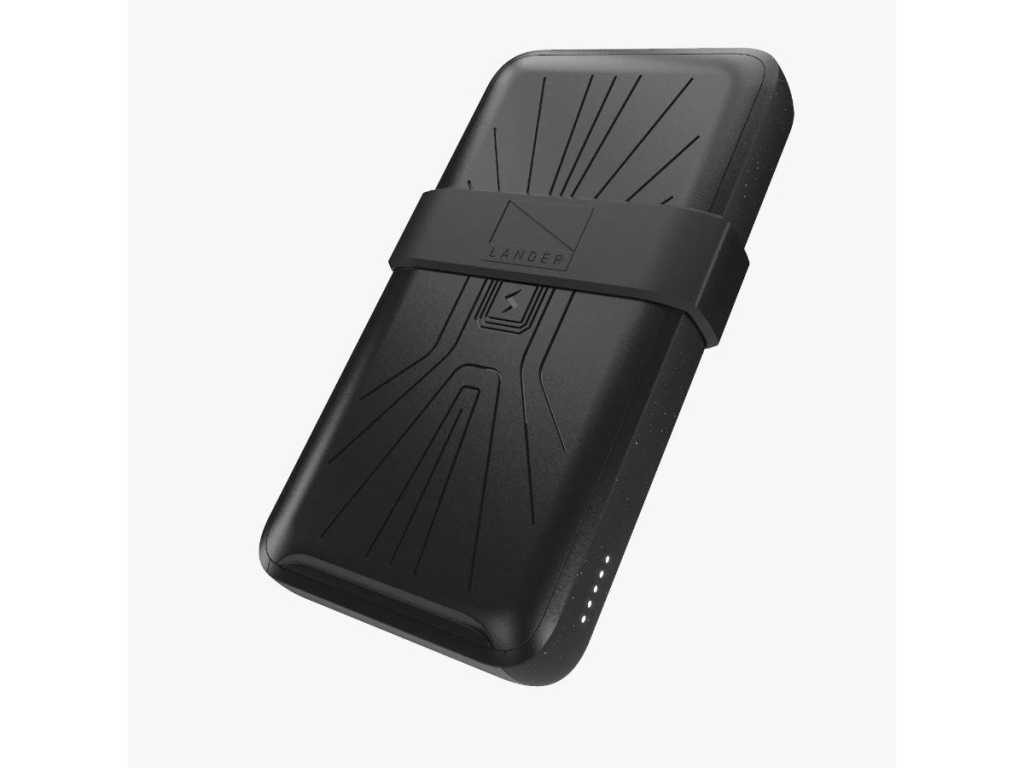 Lander
At a Glance

The Lander Cascade Wireless Charging Power Bank is a good option for people who tend to be hard on the gear.

Lander’s Cascade battery pack looks a lot like most packs I’ve tested. Only instead of a hard plastic outer shell, it has a rubber material that encases the entire pack. There’s a cover that locks into place on the business end of the pack, protecting a USB-C and USB port, helping to give it an IP65 water-and-dust resistance rating. This is a pack that’s designed to get used and abused.

The USB-C port is used to charge the pack, as well as charge your devices. You can charge up to three devices at the same time if you also use the wireless charging pad.

I verified that the pack allows for passthrough charging and it auto-starts when you connect a device to one of the ports. For wireless charging, however, you’ll need to manually turn on the pack.

There’s also a band that goes around the battery pack. It’s there to hold your phone in place when you’re using the Qi wireless charging pad on its top. On the right side of the device you’ll find five lights to show you how much charge the pack has left. On the opposite side is a power button and another light that lets you know when wireless charging is in use.

The size of the Cascade is nearly identical to an iPhone 12 Pro, just thicker. The housing has a texturized feel to it, making it easy to grip and hold onto your phone if you have it in the band.

With a total capacity of 10,000mAh, or 37Wh, the Cascade can charge your iPhone or Android phone a few times over before being depleted. The wireless charger is capable of charging at 5W, which is somewhat of a letdown. The iPhone lineup, for example, supports 7.5W and many Android phones support even faster wireless charging. At a minimum, wireless chargers should support 7.5W.

In testing, the Cascade had an efficiency rate of 81.16 percent, putting it in the middle of the pack among other battery packes I’ve tested, and just below the average efficiency of 83.58 percent.

Charging the Cascade is done through the USB-C port, which can accept up to 18W. It took two hours to charge the pack from empty to full at 9.08V/1.83A, or just over 18W.

When connecting the AVHzY USB Power Meter to the pack, I was able to verify the output of both ports on the Cascade. Both ports triggered Apple 2.4A, DCP 1.5A, Samsung 9V, Huawei 9V, QC 3.0, and QC 2.0 charging standards. The Cascade also supports Power Delivery via the USB-C port at up to 18W, which I also verified using the same meter.

If you tend to be hard on your devices, the rugged and capable Lander Cascade is worth looking at. It’s designed to be used and abused, and even to take the occasional plunge in a pool or river.