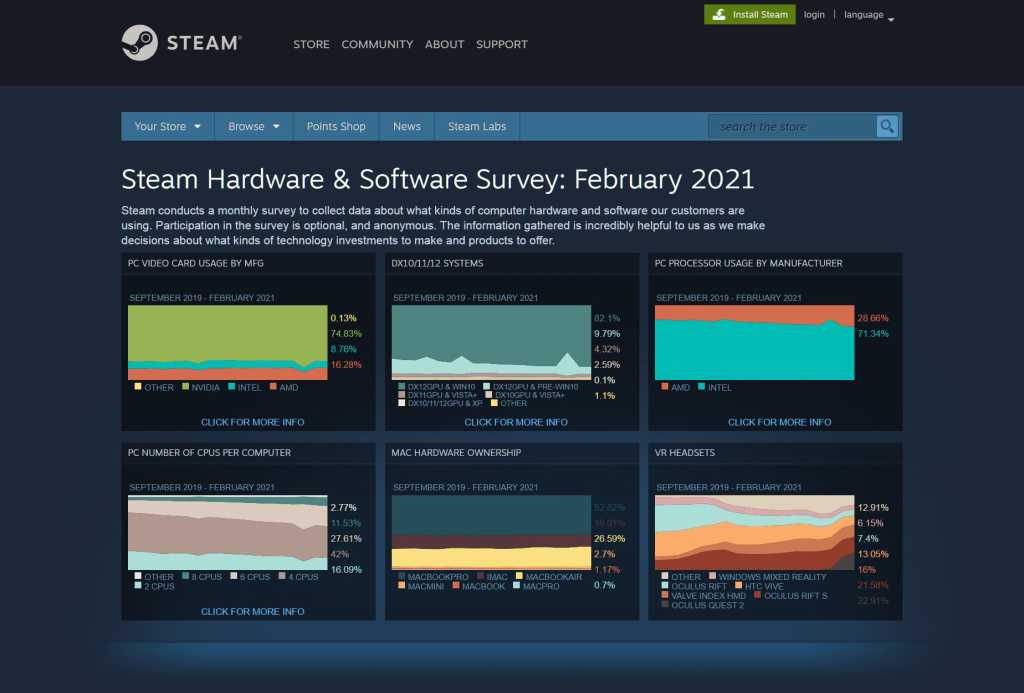 You hang up on phone surveys and pretend no one is home when a government census taker rings the door bell, but god forbid if your gaming PC doesn’t get counted in Valve’s important Steam Hardware Survey.

And why not? As the pulse of the world’s largest gaming store, you want your hardware to count if it helps tell developers they need to make games that support 16-core CPUs and ultrawide screens.

While there’s definitely reason to question whether the Steam Hardware Survey is truly a random sample of hardware—as Jarred Walton of Tom’s Hardware notes here and Extreme Tech’s Joel Hruska talks about here—even worse is not to be counted at all.

Unfortunately, what makes Steam Hardware Survey kick off is about as mysterious as confirmation of Half Life 3. If you swapped out your RAM, motherboard, a new higher resolution monitor, or even a new CPU, you may or may not have the survey kick off.

If you feel your PC has been significantly upgraded since the day it was built and you want to fire off the Steam Hardware Survey, here’s how to force it:

Once you click OK or hit Enter on your keyboard, Steam should fire up (if it’s not running already) and the Steam Hardware Survey will gather up your system’s specs.

The only difference between the surveys appears to be what game or app the the survey is tied to, but all seem to collect identical information. If you enter 1, you’re taking the Dota 2 survey; 2 is for Counter Strike: Global Offensive; 3 is for Source Filmmaker; and 4 is the Steam VR survey. You can only take each one once.

If you have a game controller, additional monitor, or VR headset you want counted, make sure it’s plugged in and powered on. For example, it took several tries to get the Steam Hardware Survey to recognize our Valve Index VR headset.

What does the Steam Hardware Survey send?

We took the Steam Hardware Survey on a few PCs to take notes about the information it gathers. The survey includes details of the manufacturer, model, form factor (laptop or desktop), CPU vendor and brand, amount of RAM, the number of logical and physical CPU cores, and a fairly detailed accounting of features the CPU supports (such as SSE levels, AES, and AVX levels). It also records your operating system and version, support for NTFS, driver and graphics card details, the number of GPUs in your system, and which bus the GPU is plugged into, as well the number of monitors connected to your system along with their refresh rate and color depth. It also asks some pretty old-school questions of your PC, such as whether it has a DVD drive, what the sound card is, and free space on the hard drive.

The survey obviously isn’t anonymous and it also creates a MAC address hash that would make your machine identifiable to Valve, so if you’re working at the NSA and you don’t want the company to know you’re goofing off playing CS:GO on the tax payers  dime, then maybe don’t take it.

For everyone else who wants to fly the flag for their favorite vendor and hopefully get game developers to modernize faster, well—it might be a good idea to invoke the survey.