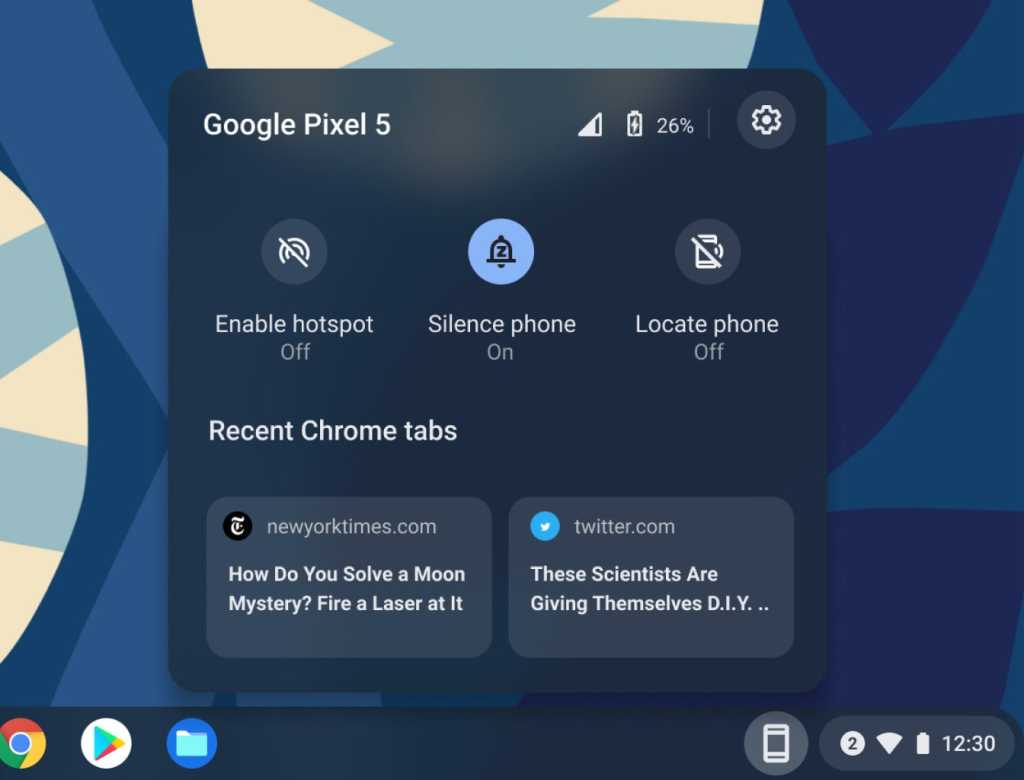 Chrome OS and Chromebooks turned 10 on Tuesday, and to celebrate, Google has announced several new features as part of the Chrome OS M89 release, including a Phone Hub, better screen sharing, and more. Many may feel familiar to Windows users.

As the second most popular computer operating system, Chromebooks have only gained in importance. But the issue Google has to wrestle with is the continual need to add new features without making the platform complicated and bloated—charges some have levied against Windows over the years. Google is trying to stay true to core values of speed, simplicity, and security, said John Solomon, vice president and general manager of Chrome OS.

The first significant feature arriving with the M89 release is Phone Hub, which doesn’t try to keep up with the Your Phone app available on Windows. Instead, it’s a subset, living down in the notifications hub at the bottom right-hand corner of the screen. Phone Hub will include shortcuts to functions found on all Android phones, and not just Pixels: the ability to create a hotspot, the ability to mute the phone, and—still very important!—the ability to ring your phone if it becomes misplaced. Finally, small buttons will include links to the last three websites your phone accessed.

Secondly, Google’s announcing Nearby Share, which sounds similar to the Near Share feature already within Windows. Nearby Share beams documents to other Android phones and Chromebooks in proximity to you, provided the recipients have also turned on the feature and chosen to accept documents. “For me, this really means no sending emails to myself with documents that needed to go from myself to myself, which is quite nice,” said Alexander Kuscher, director of product management of ChromeOS, during a Google Meet call with reporters on Tuesday.

Nearby Share will use whatever link is available: Bluetooth, Wi-Fi, or potentially ethernet, Kuscher said. Users will be able to turn Near Share on and off to “fine-tune their visibility,” he said.

It’s likely that Nearby Share will be used in conjunction with Tote, a new file folder being added to Chrome OS. It’s probably easier to think of Tote as a repository of frequently-used or critical files. And, if you don’t want to send a file from Tote, you may want to send something from the Chrome OS clipboard—which, again like Windows’ own clipboard, is being expanded to include more items, five in all.

Google is extending Wi-Fi sync capabilities to other Chromebooks. Again, this is a feature that Microsoft somewhat underplayed in Windows Mobile devices and PCs: If you were signed in with a Microsoft account, you could automatically share Wi-Fi access points and their passwords with similar devices. That same capability is being shared across Chromebooks and Android phones—a handy feature if your wireless access point has a long, complex password to deter intruders.

There’s also a list of smaller but still useful new features: the ability to right-click a word and receive a definition, or translation, or a conversion from one measurement to another; plus an improvement to the Chrome OS virtual “desks” (or desktops) that can allow a window to be right-clicked and moved to a desk. Google’s making improvements to its screen-capture tool, allowing you to make screen recordings and share snapshots more easily. Finally, Google’s also simplifying the setup process to combine home and school accounts quickly via Family Link.

Will Chromebooks replace PCs? Google’s Solomon said he hopes they will. “Increasingly, consumers are turning into Chromebooks as their primary computing device,” he said. “We see a world in the not-so-distant future where the only devices that a consumer needs to have are their Android phone, their Chromebook, and perhaps their Nest Home Hub and Android TV.”