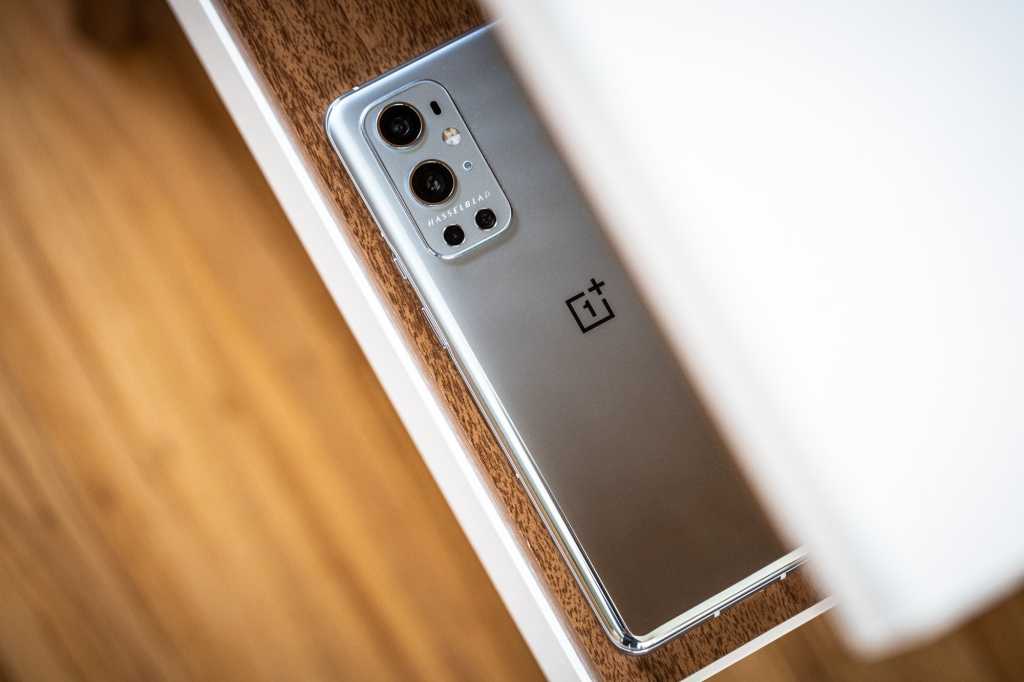 The OnePlus 9 Pro offers great upgrades over last years 8 Pro, but the Hasselblad partnership fails to live up to the hype.

The OnePlus 9 Pro arrives with a major focus on camera performance, an improved display, and the newest Qualcomm processor, the Snapdragon 888. Over the years, OnePlus has been aiming at the flagship end of the market, hoping to gain a foothold in that exclusive smartphone tier. But do these latest improvements—particularly in the camera—put OnePlus in a position to challenge Samsung’s Galaxy S21 or Apple’s iPhone 12? Let’s dive in.

Pre-orders for the OnePlus 9 and 9 Pro open March 26th, while the release date is slated for April 2nd. For this launch, there are four different phone configurations, each with its own color and spec combination. The lowest-end OnePlus 9 model comes with 8GB of RAM and 128GB of storage, and costs $729. The top-end configuration (which I review here) costs $1,069, and features 12GB of RAM and 256GB of storage. As such, the 9 Pro hits basically the same price as the Samsung Galaxy S21+ 5G, and costs a bit more than last year’s OnePlus 8 Pro.

In early March, OnePlus announced a partnership with Hasselblad, the boutique professional camera manufacturer that’s been operating for more than 80 years. The goal: to improve the camera systems in its phones dramatically over the course of three years. The OnePlus 9 and 9 Pro are the first phones to emerge from this partnership, and receive prominent Hasselblad branding inside the camera module. But does having Hasselblad involved actually improve the camera experience? Let’s first touch on how the companies work together.

Hasselblad has a long history of making high-end camera gear, including world-famous lenses. The lens systems in today’s smartphones are very complicated, and if there’s any company that could help out in this department, I’m fully confident it’s Hasselblad, especially given its track record in refining glass. OnePlus claims only one-percent edge distortion on its ultra-wide camera, while most smartphone lenses rate at 10 to 20 percent. In practical terms, this means photos taken with OnePlus’ ultra-wide camera will be sharper around the edges and suffer less extreme warping.

This holds true in my testing, and, in fact, edge distortion is the biggest improvement in the OnePlus camera system. In side-by-side comparisons, the 8 Pro’s images looks smeared around the edges compared to the 9 Pro’s, exhibiting plenty of what’s called chromatic aberration. This shows up in the 8 Pro’s images as purple outlines around dark edges, and is a surefire marker of poorer lens quality. There’s always some bending and wrapping of the light in such small lenses, but Hasselblad was definitely able to refine the system in the 9 Pro.

The next area of focus for the Hasselblad/OnePlus partnership was in the camera’s color science. Color science, in simple terms, is a camera’s unique approach for capturing accurate and pleasing colors. Every camera—including every smartphone camera—boasts its own color science that blends the quest for color accuracy with the manufacturer’s own subjective preferences.

This is easier said than done. The camera must balance color coming from different light sources, determine how that color affects objects in frame, and then make decisions on how all this information will affect colors in the final image. Improving color science isn’t as easy as “being more accurate.” Rather, it involves a lot of software tuning, an area where Google has excelled in its Pixel phones, but where OnePlus has traditionally fallen short.

In my testing, this isn’t a cut-and-dry win for the 9 Pro over the 8 Pro. With smartphone cameras featuring multi-sensor arrays, it’s always difficult to maintain the same color quality across each camera—and the 9 Pro features a three-camera array on the back. This means you’ll see slightly different colors as you go from the ultrawide to main to telephoto sensors. This was a problem with the OnePlus 8 Pro, and it continues to be a problem on the 9 Pro.

When directly comparing equivalent lenses between the two OnePlus generations, I don’t see any drastic improvements in terms of color reproduction. In fact, there are plenty of scenes where I prefer the colors of the 8 Pro, especially when shooting in mixed-lighting scenarios. The 9 Pro holds an edge in brightly lit outdoor scenes, but the 8 Pro does a bit better in low-light, indoor scenes. Once again, color preferences can be very subjective, but for all the hoopla OnePlus is touting with its Hasselblad partnership, I expected a more consistent experience.

The final piece of the Hasselblad/OnePlus partnership falls in the software/image processing department. In this area I’m a bit more skeptical because professional camera needs are quite different from smartphone camera needs. Hasselblad cameras are made for professional use, and their image processing is very much tailored around that use case. Mobile photography is more focused on ease of use and extreme JPEG processing—two things I would never call a strength for Hasselblad.

So did Hasselblad add image processing value to the OnePlus 9 Pro? In my testing, the biggest differences I’m seeing between the processing in the 8 Pro and the 9 Pro are in sharpness and HDR. The 9 Pro features sharper photos when viewed under scrutiny—some of which is the result of lens improvements, but also more aggressive post-processing sharpening. This is obvious in the more “contrast-y” edges around small details like rocks and wood grains.

In images that don’t feature people, this is a great. But it can backfire when taking photos of faces, as it tends to accentuate imperfections. The 8 Pro’s images feel natural and were plenty sharp to begin with, so depending on the subject of any photo, I wouldn’t call this a win for the 9 Pro.

OnePlus has already stated that its partnership with Hasselblad is going to be a multi-year journey, and that’s backed up by relatively incremental improvements in the 9 Pro. While there are already some signs of positive change, it’s not a drastic leap over the 8 Pro, so don’t get your hopes up. But I do believe this is a step in the right direction, and I look forward to the day when a OnePlus phone stands toe-to-toe with the best smartphone cameras on the market.

The OnePlus formula has always been marrying high-end specs to a simple phone experience, and then offering that package at an affordable price. While this approach has changed over the past few years as OnePlus gradually increased prices, the OnePlus 9 Pro still packs the high-end specs you’d expect of a flagship.

We first experienced the Snapdragon 888 processor in the Samsung Galaxy S21, but it continues to impress in day-to-day snappiness and solid battery life. For everyday use, the phone’s 12GB of LPDDR5 RAM and UFS 3.1 storage have been more than capable of keeping up with my workload. The new Turbo Boost 3.0, meanwhile, uses a couple of technologies to allow more apps to stay open in the background. I can’t actively remember a time that I saw one of my main apps needing to reload because it fell out of memory. Everything, including games, loads quickly and seamlessly with no hangs.

The 9 Pro’s 4,500 mAh battery easily lasted me through some days of heavy use, while other days it hit 20 percent by 8:00 pm. This really seemed to depend on the things I was using my phone for, and probably varies due to the new display technology (more on that later). Luckily the phone’s fast-charging capabilities—over wired and wireless connections—continue to impress. A mere 15 minutes on the Warp 50 Wireless Charger (sold separately for $69) charged the 9 Pro from about 20 percent to 50 percent—more than enough to get me through the rest of the day.

The 9 Pro’s fast performance is complemented by a smooth and beautiful display. On top of the high refresh rate of 120Hz, OnePlus has implemented a LTPO OLED display that features multiple benefits. For starters, the new display tech uses less power—OnePlus claims 50 percent less—thanks to its Smart 120Hz feature.

In a gaming phone that’s tuned for pure speed, the display’s refresh rate will be locked to 120Hz, and the display will drain more power to maintain that speed. But if you’re doing a mixture of tasks in normal usage, you want the display to adapt to what you’re viewing. Scrolling Twitter or Instagram? You want smooth motion. Pausing to read a PCWorld article? Then you don’t need the screen to refresh as fast, which should ultimately preserve battery. Thanks to its Smart 120Hz feature, the display in the OnePlus 9 Pro can even go down to a refresh rate of 1Hz—that’s a first for a smartphone. The screen was plenty bright to see outside in daylight, and wasn’t blinding in a completely dark room.

The QHD+ (3216×1440) display is also great at color reproduction. The long list of calibration features are interesting to a professional like myself, but in plain terms the colors just pop. Colors look bold and vibrant even in bright light, and I never had to worry about odd coloring when editing photos for Instagram. This is easily one of the best and most comfortable displays I’ve used to date, a real treat.

When it comes to the Android-based operating system, Oxygen OS 11, I’m still not a huge fan. I much prefer the more stock-like Android approach of past OnePlus phones. Still, it’s got a nice, clean design that organizes everything in a simple and easy-to-use way. The latest Oxygen offers a snappy experience that rivals what’s found on Samsung Galaxy phones.

That said, I wish various design elements didn’t take up so much space. Each “bubble” in the notification shade takes up more space than I would like, and the menu layout in the Settings app takes more scrolling than I believe it needs. These are all personal preferences, of course, and you might love the look and feel. But like I mentioned, I tend to lean toward stock Android—probably more than most phone reviewers.

OnePlus 9 Pro: Who should buy it?

Other than its marvelous display, the OnePlus 9 Pro isn’t a giant leap over the company’s Pro devices of the past few years. I’m absolutely loving the new display, and even if you’ve purchased a OnePlus device in the past year, this might be worth a look for the screen alone. If you’re coming from an even older device, this one will blow your socks off—and you will, of course get the generational upgrades in terms of camera and processor speeds.

I’ve always believed that a OnePlus phone is the next logical step for Google Pixel users, as it improves upon stock Android in smart ways without bogging down the experience. While the camera system isn’t as consistent and reliable as a Pixel phone’s, the rest of the hardware is a major upgrade in both looks and performance. OnePlus does typically offer quick Android version updates (though of course they will never be as quick as on a Pixel).

If you’ve been burned by other Android devices with more bloated OS experiences, then Oxygen OS will be a breath of fresh air. While the hardware doesn’t feature any whiz-bang crazy new gimmicks, OnePlus devices have always favored dependability more than flashy tricks and a bunch of features that most people don’t use.

Ever since the 5T came out, OnePlus became my de facto choice for “best bang for the buck” in an Android phone. The OS improved on the stock Android experience in smart ways, the physical hardware was typically clean and good looking, and OnePlus packed high-end features while undercutting the prices of competitors.

The OnePlus 9 Pro is a rock-solid phone in every aspect, and continues to build on that great legacy established with the 5T. The screen is beautiful, the OS is snappy and clean, and the camera system, while a work in progress, is off to a promising start. Overall, it gets my recommendation, if only for the awesome display.