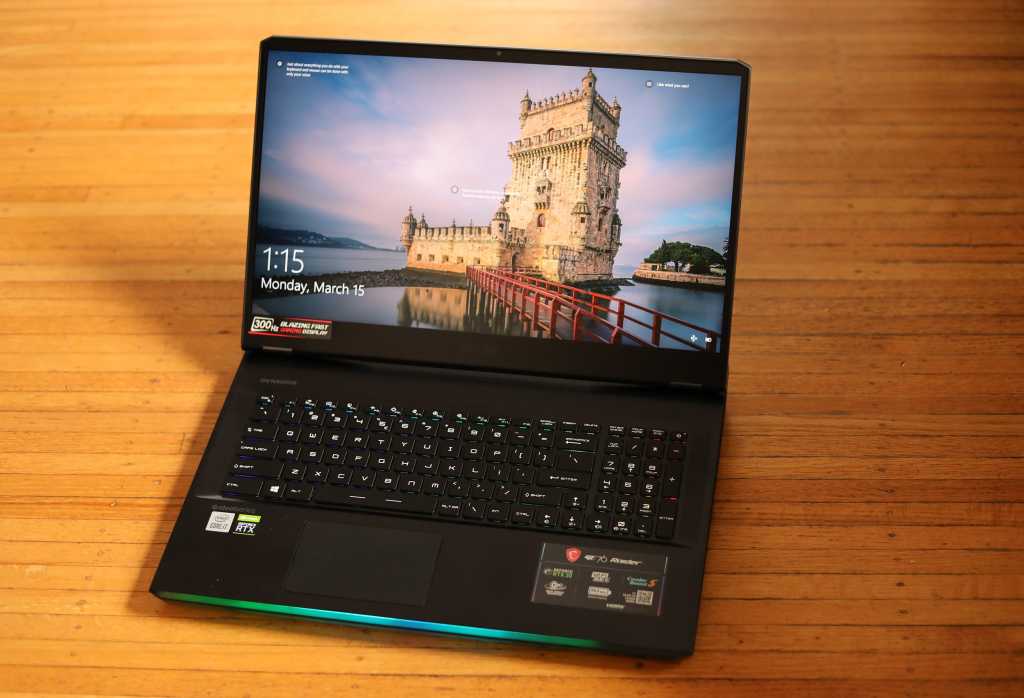 The MSI GE76 Raider is a traditional big, heavy gaming laptop that’s a solid performer overall with one key advantage: the screaming performance of a GeForce RTX 3080 mobile GPU tuned up to 155 watts. It’s expensive, but it’s worth it.

Does RGB really make a laptop go faster? Indeed it does. At least, you’ll probably believe that after seeing the in-your-face RGB bar running across the front of the MSI GE76 Raider gaming laptop.

Because it couldn’t be the 8-core Core i7-10870H CPU, nor the Nvidia GeForce RTX 3080 Laptop GPU set to a blistering 155 watts, that makes the laptop go fast. It’s all in the RGB light strip.

Yes, we’re being facetious, but let’s be honest that looks typically matter more than specs to most people. In the case of the MSI GE76, however, there’s plenty of substance to back up all that flash, namely its high-wattage GPU. It’s an expensive machine, but it’s worth it.

This review is part of our ongoing roundup of the best gaming laptops. Go there for information on competing models and how we tested them.

Sure, we’ve reviewed some impressively thin, light, and fast gaming laptops lately, like the Asus ROG Flow X13. But the MSI GE76 Raider, like its close competitor the Gigabyte Aorus 17G, is an unapologetically big, heavy, traditional gaming rig. Is the MSI as stunningly quiet as the Gigabyte? We’ll see in the performance section. Meanwhile, here are the MSI GE76 Raider’s basic specs.

Moving to the left side (see photo below), you’ll find USB-A 10Gbps, USB-C 10Gbps, and a combo analog jack.

Ports are back—on the back panel of gaming laptops, that is, reversing a concerning trend of fewer connectivity options. On the rear of the GE76 Raider you’ll find a miniDisplayPort, USB-C 10Gbps with DisplayPort support, full-size HDMI, 2.5Gbps ethernet, and a dedicated rectangular charging port for the power brick.

Some people might be most excited about what’s on front: a 1080p webcam. Although you can find 1080p webcams in a smattering of higher-end laptops (Microsoft’s Surface line has used 1080p webcams for some time, for example), this resolution is definitely unique in a gaming laptop.

You can see the MSI GE76 Raider’s webcam below on the left, showing good color and white-balance rendition. For the comparison image, we blew up the 720p image produced by the HP Elite Dragonfly, a corporate laptop, to match the MSI’s 1080p. Obviously, the higher-resolution camera produces a sharper image. But manage your expectations—it’s still a small sensor in a laptop bezel, so don’t expect DSLR results, nor a nice optic stack like on a pricier Logitech C920 webcam. We should nevertheless applaud MSI for including one (when some gaming laptops have no webcam), and making it a good one.

Networking typically gets nothing more than a spec line, but it’s worth calling out the extra effort MSI put into the GE76 Raider’s setup. This is definitely the first gaming laptop we’ve seen with Wi-Fi 6E support using an Intel AX201. Wi-Fi 6E’s main claim to fame for now is use of the mostly unpolluted 6GHz spectrum. Wi-Fi 6 and lower still operate in the 5GHz or 2.4GHz spectrums. This should help in the Wi-Fi wars going on in most homes, where neighbors continually put in more powerful routers to improve connectivity. Unfortunately, every time a neighbor does that, the other neighbor fires back with an even bigger router. All this is mostly in the 5GHz spectrum, though, so by moving to a Wi-Fi 6E laptop (with a Wi-Fi 6E router) you should be able to float above the fray for now. The laptop also features a Killer E3100X 2.5GbE port for wired connections.

We had no major complaints about the per-key lit keyboard. Well, we still disagree with the 10-key numeric keypad, which emulates a telephone’s layout rather than a calculator’s but that’s pretty typical of most Taiwan-based keyboards.

The keyboard is bright but it doesn’t reach the dazzling levels we’ve seen elsewhere. The trackpad is well placed, with a slight metallic feel, and it supports Microsoft Precision drivers. The speaker are fair to good.

The display is a 17.3-inch, 16:9 AU Optronics panel with a 300Hz refresh rate. We measured a maxium brightness of about 270 nits, with an asterisk: That brightness is attained only with the screen set to the Microsoft Hybrid Graphics mode, also known as Nvidia Optimus. That allows the integrated graphics (IGP) to take over when doing non-GPU intensive applications. Setting the laptop to its optional discrete graphics mode, which makes the Intel IGP disappear (and also eliminates a little latency), limits the laptop to a maximum brightness of about 200 nits.

The refresh rate probably sounds excessive, but it’s already been surpassed by 360Hz laptop panels. All we can say is 300Hz is a visible improvement over 144Hz panels.

We’ll kick off our benchmarks looking at CPU performance of the GE76 Raider using the older Maxon Cinebench R15 benchmark. It’s a nearly pure CPU benchmark based on the 3D modelling engine from Cinema4D. The test is fairly lightweight compared to newer versions, but it’s still a useful metric to see how a laptop can scale with multi-core workloads.

The MSI GE76 Raider falls just slightly behind the Gigabyte Aorus 17G, which has the same 8-core Core i7-10870H CPU. That’s decent—for an 8-core Intel chip. The desktop Core i9-9900K in the humongous Alienware Area 51m R1 has no problems sprinting by, but all eyes are on the Ryzen 9 5980HS in the Asus ROG Flow X13 at the top of the chart (the CPU is incorrectly labeled as a 4980HS). When you remember that the Asus ROG Flow X13 is a three-pound thin-and-light laptop, you really appreciate the advantage AMD has right now.

Despite what the Internet tells you, most applications don’t actually use all those cores, so we also run Cinenbench R15 on a single thread to get a feel for the laptop’s performance on more typical loads. For the most part, it’s pretty much a tie among all of the Intel gaming laptops and all should be comparable to the others on such things as Office and browsing. AMD’s Ryzen 9 5980HS in the Asus Flow X13, again, has an impressive lead which should equate to slightly snappier performance.

Cinebench’s short burst of intense workload is an easy sprint that barely winds most modern CPUs, especially those in larger gaming laptops. To test CPU staying power on more demanding tasks, we run an older version of the free HandBrake utility to convert a 1080p video using the Android Tablet preset. The task takes upwards of 20 minutes to complete. The GE76 Raider finishes about where we expect for the CPU model. The top dog is, not surprisingly, the desktop Core i9-9900K in the Alienware Area 51m R1.

MSI seems to sacrifice a little CPU performance in favor of the GPU. Now that Nvidia’s broadened the mission of the Max-Q brand, it’s encouraging vendors to define GPUs by wattage rather than name. The higher the wattage, the more performance you get. The 155-watt rating of the RTX 3080 in the GE76 Raider sets a high expectation, which it ably fulfills.

Actual games can sometimes can be very CPU-dependent, though. That’s why the Alienware Area 51m R1, with its high-clock Core i9-9900K and full-tilt RTX 2080, has the lead over all. Still, the GE76 Raider represents well with an impressive 150 fps in the game. The Asus ROG Flow X13 takes a hit because its external graphics box uses some of the available bandwidth to pass back the actual frames. If you use an external display hooked up to the eGPU, the laptop’s performance increases by about 13 percent.

Looking at more advanced gaming tasks, we also run 3DMark’s Port Royal, which is a test of ray tracing performance. The high-power RTX 3080 in the MSI doesn’t disappoint here either. The test looks to also be less bound by the bandwidth. We notice the 3-percent increase in wattage for the RTX 3080 in the MSI GE76 Raider ends up yielding about a 3 percent increase in performance over the Asus ROG Flow X13.

We’ll end our testing with battery life, even though gaming laptops are almost always run plugged in for gaming sessions. For our test, we loop a 4K movie with a headset plugged in, the screen set to about 255 nits of brightness, and the laptop in airplane mode which turns off the Bluetooth and Wi-Fi. We also turn off the laptop’s RGB lights, set the laptop to the hybrid graphics, and select the battery-friendly performance settings.

MSI makes a big deal out of the 99.9-watt-hour battery it uses (the largest legal size you can have in a laptop on a commercial flight). The run time is very impressive for a gaming laptop at just under seven hours.

Before you entertain a fantasy of playing games while on a flight from Singapore to Newark (about 18 hours), you should know that video playback is one of the easiest chores a laptop can perform today. If you browse the Internet or run Microsoft Office, you can probably expect to chop off a third of that battery life. Edit photos or do light-duty video editing, and expect to cut the battery life in half. Playing games will probably cut battery run time to an hour or two at best.

But yes—this is still pretty impressive battery life for a big gaming laptop.

We’ve now seen three laptops with Nvidia’s mobile GeForce RTX 3080, and each offers their own distinctive personalities. Gigabyte’s Aorus 17 features a slightly faster CPU performance but much slower graphics performance, thanks to its lower-wattage GPU. To make up for that, the laptop is drop-dead silent for a gaming laptop, with the sound level barely breaking 38 dBA. The Asus ROG Flow X13 with its eGPU offers that wickedly fast Ryzen 5000 CPU and the RTX 3080, but its eGPU makes it far more cumbersome when you want to game.

That brings us to the MSI GE76 Raider, which is far more of a conventional gaming laptop. It’s definitely louder than the Gigabyte Aorus 17—our calibrated sound meter puts it at 48 dBA while gaming. That extra noise (a considerable amount) pays for itself, though, with far faster gaming performance. That you also get a 1080p webcam and Wi-Fi 6E is just icing on the cake. Oh, and yeah, you get the RGB too, which we know makes it go faster.