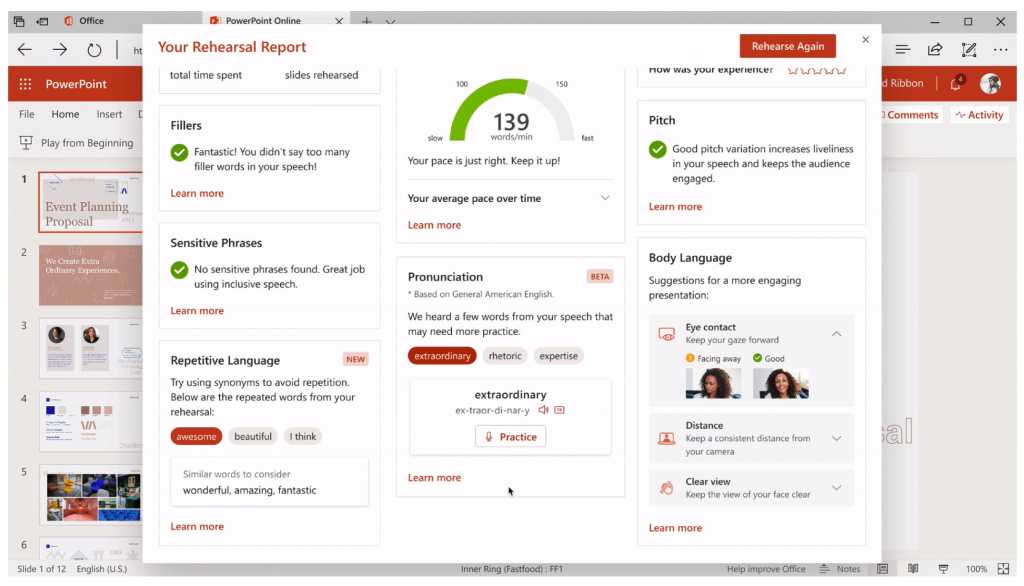 If you’re the type of person who methodically fine-tunes their PowerPoint presentations the night before, or someone who just wants to improve their speaking style—well, Microsoft’s AI is ready and eager to help you out with PowerPoint Presenter Coach.

Originally launched in July 2019, PowerPoint Presenter Coach is now generally available for Windows, the web, and even iOS and Android, Microsoft said Wednesday. The tool looks at several aspects of your presentation, from the language you use to even how you address speakers, and offers advice. You’ll need to subscribe to Microsoft 365 to use Presenter Coach, however.

Microsoft is even adding new critiques as the service goes live, with an eye toward presentations you’re making on Teams or Zoom. First, Presenter Coach will look for body language: If you’re constantly looking away from the camera, the Coach will remind you to engage your audience with your eyes. Specifically, the Coach wants to see your face clearly, and make sure that your eyes are directed at the camera. Finally, it will advise whether you’re too close or too far away to be seen clearly.

Finally, Presenter Coach will listen for your pronunciation and offer suggestions via  a recorded pronunciation guide. In a blog post, Microsoft admitted that this feature could be a bit controversial. The feedback is being optimized for what the company calls “General American English,” but Microsoft will also provide the option of disabling the feedback in case you disagree with the suggestions or don’t otherwise find them useful.

Presumably, Presenter Coach will also include the features that Microsoft originally planned, such as catching you if you accidentally drop a bad word into your presentation.

How to use Presenter Coach for PowerPoint

To start working with Presenter Coach, you’ll need to open your presentation within PowerPoint. In the Slide Show tab, as part of the Rehearse Group, click Rehearse with Coach. Then click Start Rehearsing to begin your presentation, and check the Show real-time feedback box if you’d like ongoing guidance. Only begin speaking, however, once you see the Listening… prompt appear. If you’ve enabled real-time guidance, the Coach will remind you not to drop in “filler” words, for example, as you speak.

At the end, you’ll see a Rehearsal Report that summarizes the feedback from the Coach. Be sure and take a screenshot, though! For privacy’s sake, Microsoft will delete the feedback after you’re through, and it also won’t save a recording of your performance.