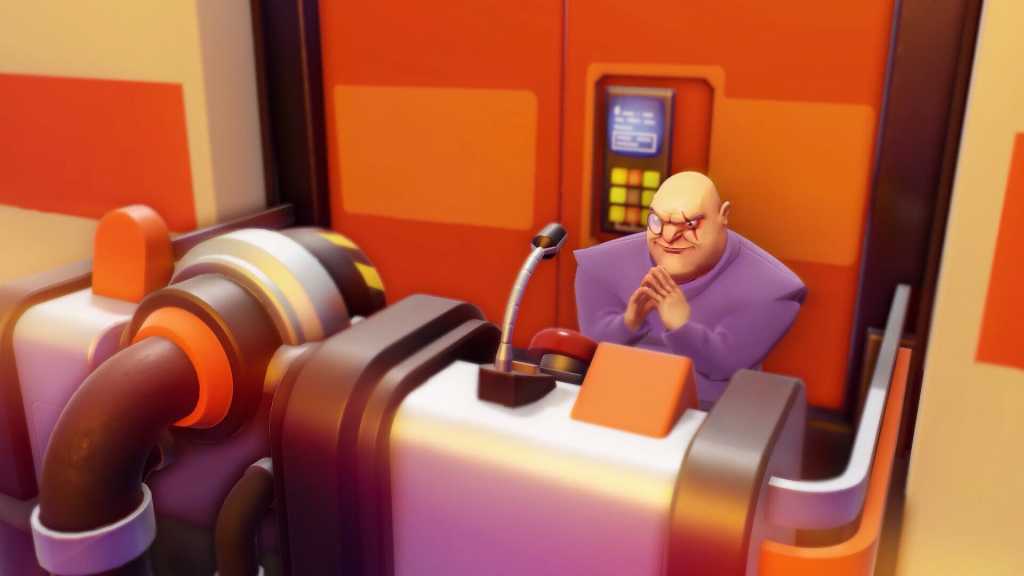 Evil Genius 2: World Domination, the sequel to a PC cult classic launched 17 long years ago, sunk its hooks into me from the start with its pitch-perfect campy spy flick vibes. But it was the traps that made me fall in love with this fun, yet flawed gem.

In case the name didn’t tip you off, in Evil Genius 2: World Domination you play as an evil genius hell-bent on world domination. After taking your pick of four different villains—I chose Maximilian Von Klein, a Dr. Evil lookalike and the star of the first game—you begin constructing your lair, starting with a vault to hold your ill-gotten gold bars and slowly expanding until your secret volcanic island base is riddled with power generators, interrogation chambers, training centers, radio control rooms, all built by your loyal minions (who also need devoted areas to keep their bodies and minds in tip-top shape).

Yes, Evil Genius 2 is a Dungeon Master-style base management game, augmented by a world map that has you building an evil network across the globe. Once you’ve established a foothold in a country, you can send minions on nefarious schemes—bank heists, kidnapping plots, and so on—that both earn you additional resources and generate “heat” that can temporarily lock down the area, restricting you from launching missions there (though some schemes also reduce the heat in an area).

That’s where the Forces of Justice comes in—and those delicious traps.

Kicking up a ruckus in your evil genius’s quest to build and deploy a Doomsday Device (each villain gets their own, and their own narrative campaign) inevitably draws the attention of the good guys. In time, increasingly dangerous investigators and agents of the Forces of Justice start poking around the casino that serves as the front for your secret lair. While you can groom valets to escort some of the snoops out of your casino, many good guys will wind up discovering your base, intent on wreaking havoc and slaughtering minions. Unless you snare them in traps that either outright kill them or leave them helpless for your muscular guards to mop up, that is.

Traps lean hard into the campy ludicrousness of Evil Genius 2: World Domination. You can research everything from freeze rays and poison dart walls to shark pools and a Little Shop of Horrors-esque “Venus Spy Trap” that can gobble up unaware agents whole. Each one comes with its own hilarious attack animation. Seeing a boxing glove erupt from behind a hidden wall panel and sock an investigator in the face never gets old.

The real allure comes from trap combos. The Forces of Justice can evade or disable some traps—especially the uber-powerful Super Agents—but cleverly configuring your base’s corridors with overlapping traps can be devastating. Sure, a simple fan trap can blow an investigator into the wall for minor damage. But if you arrange things so that the fan trap blows intruders back into a shark tank or a wall of lasers, well, now we’re talking. I’ve been having a blast focusing my research trees and base-building around eliminating good guys long before they’re anywhere near crucial facilities.

That’s not to say Evil Genius 2: World Domination is perfect. You won’t want to skip the tutorial, especially if you’re unfamiliar with the niche dungeon master genre. Even the tutorial glosses over some technical intricacies you can find only by mousing around the abundant menus yourself. It also could be clearer about how you might want to lay out your rooms and items, as I found myself having to perform a substantial overhaul to fit everything just a few hours in. Some of the tips from the video below—which was created by the developer—would’ve fit well into Evil Genius 2’s early game.

More crucially, Evil Genius 2 eventually settles into bouts of downtime when you’re waiting for various construction and research projects to finish up. There’s a lot of waiting around and twiddling your thumbs the further you get into the game. A fast-forward button helps, as does distracting yourself with world map missions, but those global schemes mostly feel like a fanciful “choose your own adventure” version of a menu screen rather than a compelling gameplay experience of their own, with all the action happening offscreen.

I wish I could automate the world map in some way, actually, though doing so would leave you with precious little to do while you’re waiting on your various base-building endeavors to complete. Fingers crossed that future balance patches even out the pacing a bit.

Don’t necessarily let the downtimes dissuade you, though. There’s a satisfying sense of progression to the game, and I’ve been having a ton of fun with Evil Genius 2. This is a very good base management game propelled to even loftier heights by its fantastic vibe. I found myself spending those downtimes simply basking in the glorious minute-to-minute details of my mastermind’s base.

The audio doesn’t disappoint either: Furniture falls into place with a satisfying crash, the voice actors throw themselves into their over-the-top roles, and every sound effect I’ve heard so far fits perfectly. The brilliant musical score buttresses everything else with themes that could fit into any zany espionage thriller. It truly feels like you’re playing an interactive version of Austin Powers, only from Dr. Evil’s viewpoint.

I love it. I’m also nowhere near completing it, but once I do, Evil Genius 2 should hold plenty of replay value. Each of the four masterminds offers their own unique narrative campaign and gameplay perks, while you can choose from three different islands to serve as your lair, complete with the ability to dig deeper as you unlock additional tools. Developer Rebellion has already revealed plans to release an additional Evil Genius, and recruitable henchmen expand your options even further. If you don’t feel like working your way through a narrative campaign, you can also hop into a sandbox mode with unlimited cash where you can focus purely on base-building.

It took 17 long years for Evil Genius to spawn a sequel, but the wait was worthwhile. Evil Genius 2: World Domination absolutely succeeds in making you feel like a moustache-twirling supervillain. That loving devotion to the feel of 60s spy flicks helps the game stay entertaining even with its occasional slower patches and rougher edges, doubly so if you played and enjoyed the original.

If you dig base management sims or simply want to fulfill your wildest Bond villain fantasies, Evil Genius 2 is worth picking up. It’s clearly a labor of love from developers who hold the original cult classic deep in their hearts—and I could spend hours setting up diabolical corridors stuffed with traps. Evil Genius 2: World Domination hits Steam on March 30 for $40.