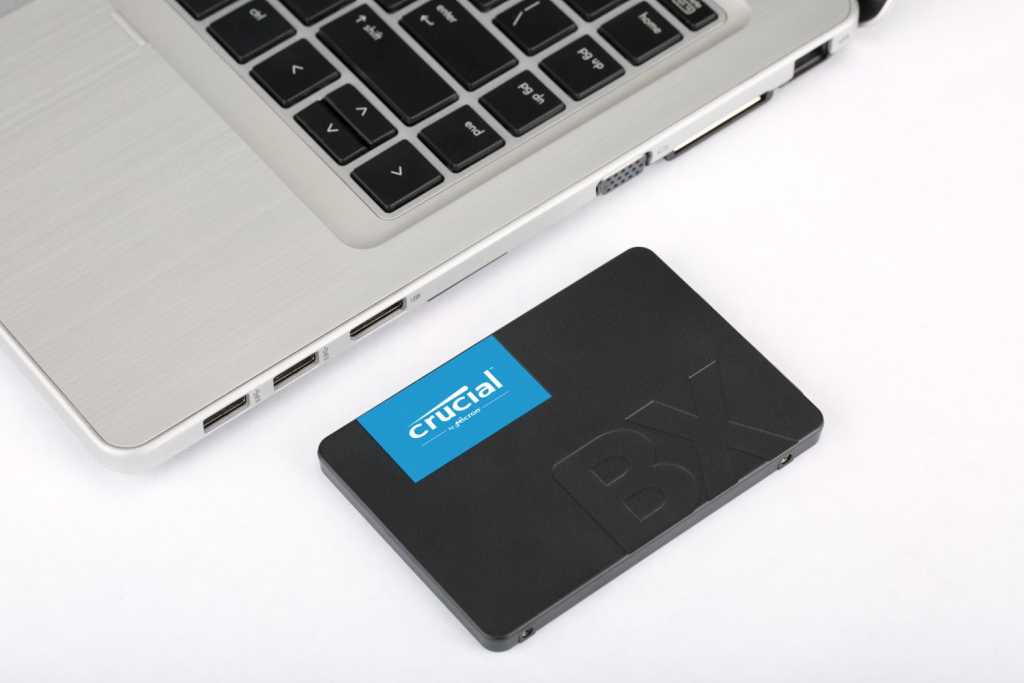 We recommend this QLC drive in the larger capacities for those that want good everyday performance for a budget price. The smaller capacities will likely run into more slowdowns during heavy writes.

Crucial’s BX500 internal SSD offers a lot of capacity for not so much cash, along with great everyday, real-world performance. Most users will be perfectly happy with this QLC drive, as long as they don’t bang on it too hard—as in writing large amounts of data in a short period of time, or filling the drive to point where it runs out of NAND to treat as cache. At that point, write performance drops to around the hard-drive level.

Normally you’ll see 250GB and 500GB drives sold in product lines that feature 1TB and 2TB models, or conversely, 980GB and 1920GB with 240GB and 480GB drives. This is due to the percentage of NAND used for over-provisioning (allotting spare cells as replacements). Crucial obviously feels that the lower-capacity BX500s require more, which might have something to do with intelligent caching. Or not.

The BX500 employs a Silicon Motion SM2259XT controller. The four NAND chips inside our 2TB test model bore the OBY22NX894 marking. I found no reference to those NAND part numbers online, however, there were four chips on the rather small PC board inside the unit. The large drop in performance after running out of secondary cache during our long 450GB write test strongly suggests that it’s QLC or quad-level cell/4-bit (16 voltage levels).

You won’t necessarily find the same-density NAND chips in the lower capacities. All are rated for the same 540MBps reading and 500MBps writing, so the type of NAND and controller likely remain the same. Crucial does not promise that this product will use the same components throughout its life cycle, however—which could mean your drive won’t perform the same as the one we tested.

Note that the write speed estimate is for a virgin drive with enough NAND available to be treated as SLC cache—there’s no DRAM on board. When the drive runs out of cache, as mentioned, write performance will drop significantly.

Whatever the componentry, the 2TB BX500 is a very good everyday performer. Most users will never run into write slowdowns, at least with the larger capacities. With the 240GB and 480GB drives, which have far less NAND to employ as cache, you might.

All but the best SSDs slow down when NAND cache is gone, with QLC being the slowest when this occurs. Also, the phenomenon will present itself more frequently in all drives as they fill up and there’s less free NAND available for use as cache. That’s why it’s important to overbuy in terms of capacity with the vast majority of SSDs.

The BX500 actually led the pack (Samsung 860 QVO, Samsung 870 QVO, Kingston KC600) in performance during our 48GB file transfers. These are more indicative of the occasional long writes that most users might experience during backup or other heavy operations. But remember that these times were posted by the 2TB drive. The 240GB and 480GB BX500s are likely to hit the QLC write slowdown far earlier and post slower times than those shown below.

You can see just how much the BX500 and other QLC drives slow down when they run out of cache in the 450GB write times shown below. The much pricier Kingston KC600 is the only TLC drive in the charts, and the only one that doesn’t slow down off-cache, if indeed it’s even employing cache.

As you can see from the screen capture shown below, when the BX500 runs out of cache, write speed can drop as low as 40MBps—10MBps if the drive is caught doing housekeeping. It doesn’t flatline there, however. It bounces between 40MBps and full speed, suggesting that more cache is being allotted in real time.

While we’re compelled to talk about the slow write speed off-cache, again, this comes into play only when you write fairly large amounts of data—or as I said, when the amount of data stored approaches the capacity of the drive.

Crucial is one of several vendors who’ve downgraded components without changing product designations. If the performance of your BX500 varies drastically from what we found with our review drive, please let us know.

Good for everyday use

The BX500 is subjectively as fast as anything out there until it runs out of cache. That’s likely to be a rare occurrence for the average user. Power users should skip it, but for everyone else it’s a good deal. We do, however, recommend overbuying capacity-wise by at least 50 percent.