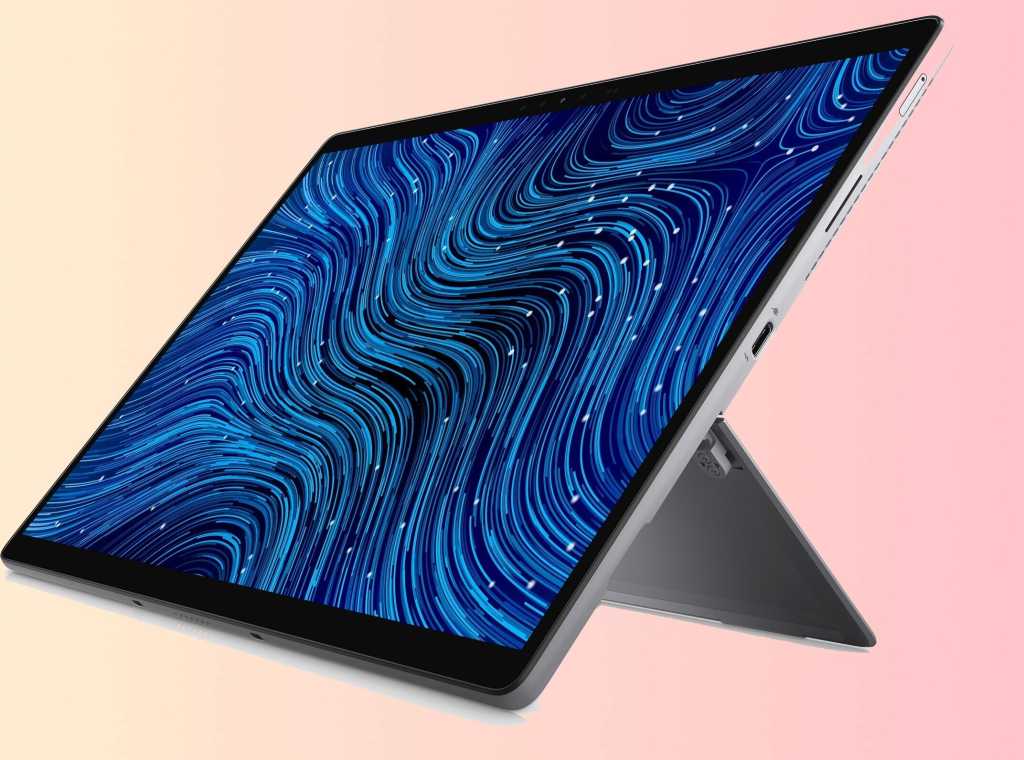 The Latitude 7320 Detachable is Dell’s answer to the excellent Microsoft Surface Pro 7+ tablet, but with Thunderbolt in place of the Surface Connector, and a hidden, optional fingerprint reader to supplement the Windows Hello depth camera. Its integrated pen cubby looks virtually identical to the one on the Surface Pro X.

Microsoft’s Surface Pro 7+ tablet represented an enormous step up in graphics performance, but we knew there were competitors on the horizon. Dell’s business-oriented tablet is slightly larger at 13 inches and brighter at 500 nits maximum, but slightly lower-resolution compared to the Surface Pro 7+. Dell has also recognized that the work-from-home movement continued, so it’s built in an improved user-facing 5MP camera that contains an integrated image processor.

However, it’s possible that the Dell Latitude 7320 Detachable will be substantially more expensive than Microsoft’s Surface Pro 7+. Microsoft sells the Surface Pro 7+ for as little as $850, while the Dell Latitude 7320 Detachable will go on sale on April 27 for $1,549. Moreover, both the external keyboard as well as the tablet’s pen will be sold separately: $150 for the keyboard, $80 for the pen, and bundled together for $200.

Internally, the two competing tablets have a lot of overlap. Dell’s Latitude 7320 will use Intel’s 11th-gen Tiger Lake processor, beginning with the Core i3 and working up to the Core i7, with vPro. Dell will also use Intel’s integrated Iris Xe GPU for graphics rather than a discrete GPU. Dell said that memory options will range up to 16GB of LPDDR4X memory, as well as a range of M.2 SSD options from 128GB on up to a full terabyte. WWAN options will be available, tapping into Qualcomm’s X20 LTE-A modem with support for AT&T, Verizon, and Sprint.

At 1920×1280, the Latitude 7320 Detachable’s display is slightly higher-resolution than the 1080p displays that were included in earlier tablets. Dell is also touting a technology it calls Comfort View Plus—a way of eliminating the harmful 460-465nm range of blue light which can disrupt sleep. Dell believes it can shift the visible range of light the tablet produces away from these wavelengths, but—using color correction—without the yellowish tinge that usually accompanies the “night light” mode.

Accompanying the Dell Latitude 7320 Detachable is what Dell calls the Detachable Keyboard, a spill-proof premium metal and faux-suede keyboard that does for the 7320 what the Signature Type Cover does for the Surface. Interestingly, Dell has also built a charging cubby into the keyboard specifically for its Detachable Active Pen, which charges almost instantaneously—in thirty seconds!—while docked inside the cubby, using capacitor technology.

One of the larger points of differentiation between the Surface Pro 7+ and the Dell Latitude 7320, however, is the latter’s use of Thunderbolt ports on either side of the tablet. Microsoft, too, uses external ports—the Surface Connector—which was years ahead of its time, offering both power and high-speed I/O through a single proprietary connector that has remained constant through generations of product. The Latitude 7320’s two Thunderbolt 4 ports, however, offer everything that the Surface Connector does, tapping into a growing ecosystem of Thunderbolt docks, while the Surface remains restricted to one of two generations of proprietary Microsoft Surface Docks.

Dell’s Latitudes also include what Dell calls the Dell Optimizer, a set of apps which taps into what the tablet knows about you to optimize charging, prioritize your most important apps, and lock and unlock the tablet based on your proximity.

Finally, Dell’s Latitude 7320 Detachable responds to Microsoft’s Surface cameras with its own 5MP user-facing camera—the same resolution as Microsoft’s own Surface cameras, which allow for 1080p video while videoconferencing. Dell says the camera includes an Intel Image Processor (IPU 6) which enhances colors and contrast. Latitude cameras also include temporary noise reduction to reduce the grainy images that can occur in low light.

Can Dell’s Latitude 7320 Detachable stand up to the Surface? From a pricing perspective, it looks a bit doubtful. If you’re interested in a Surface-like tablet that uses Thunderbolt alongside some other interesting features, though, Dell’s new tablet may be worth a look.