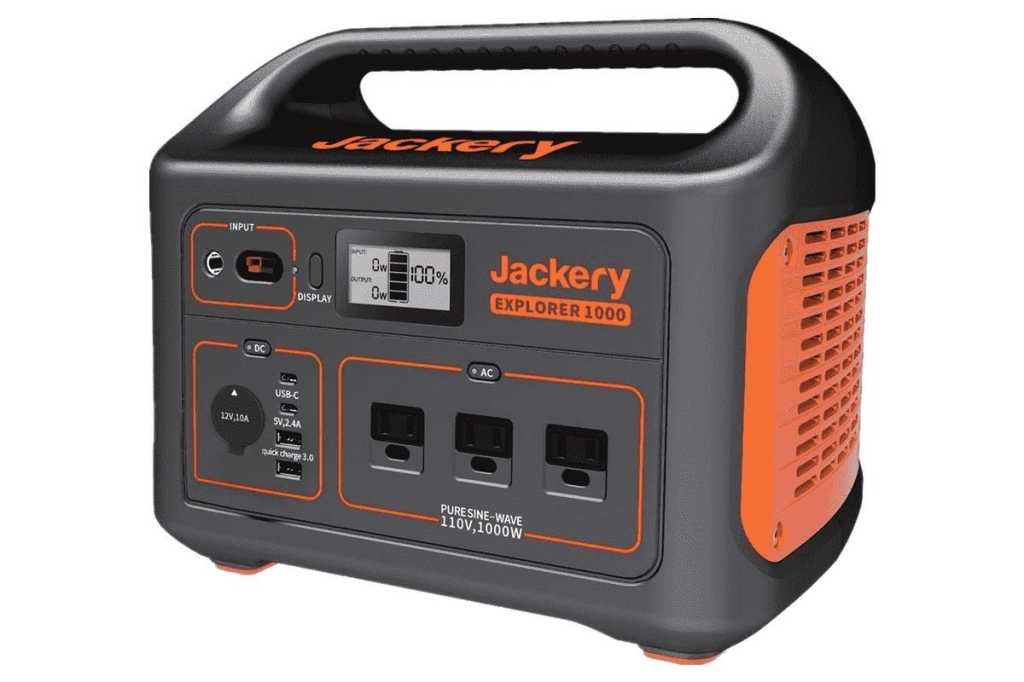 Jackery
At a Glance

You won’t want to tote the Explorer 1000 long distances, but for your off-the-grid needs, or as a hefty backup in your garage, it brings the juice.

Power stations are a convenient way to have what amounts to a big backup battery in a compact form. The Jackery Explorer 1000 Portable Power Station is by far the largest power station I’ve reviewed, with a total capacity of over 1,000 Watt-hours and weighing in at 22 pounds. It’s big, in more ways than one.

After unboxing and hefting the Explorer 1000 out of the box, the first thing you’ll notice is the number of ports and the LCD display. The screen shows you how much power is going out and coming in if you’re charging the Explorer 1000 while alo using it. It’s also a quick and easy way to check how much charge the station has remaining with a quick press of the button next to the screen.

There are several different sections on the front of the Explorer 1000, each one with a different purpose. From top to bottom, left to right is the input section. There’s a barrel adapter for the included wall charger and a connection for the optional solar panels (more on both of those in a minute). Next is the screen with a display button.

Below the input section, you’ll find the DC connections, which include a 12V port, two USB-C ports and two full-size USB ports. Both USB-C ports output at up to 12V and 3A (36W). One USB port puts out the seemingly standard 5V/2.4A, while the other one boasts Quick Charge 3.0.

The next section on the station is where you’ll find the AC connections, which amount to three different outlets. There’s a power button located above both the AC and DC sections that needs to be turned on before using.

There’s a sturdy handle at the top of the station, making it easy to pick up and carry around. But you won’t want to carry it long distances, as it’s heavy. It measures 13.1 x 9.2 x 11.1 inches. It’s small enough to put in the back of your car or truck when you go on a camping trip, or keep it on a shelf as a backup power source during stormy months.

The station has a total capacity of 1,002Wh and can output up to 1,000W with a surge rate of 2,000W. Anything over that and the station will shut down as a safety feature. We couldn’t use our standard equipment to test the capacity of the Explorer 1000 given how long the station’s battery lasts. It would fill up the memory in our AVHzY USB Power Meter and / or the Windows PC we use to monitor testing would lose connection to the meter. It’s simply not designed to be capturing data for days (yes, days) at a time.

Instead, we used the DROK load tester and the Portapow power monitor to track output. We ran the test three different times, and the Explorer 1000 averaged 846.77Wh of output. That’s 84.47 percent efficiency. Not bad at all.

We also connected a small desk lamp with an LED light bulb to the Explorer 1000 and monitored how long the light stayed on using a time-lapse camera. The result: 2 days, 17 hours, and 20 minutes.

Included with the station is a standard wall charger that charges the station in 7 hours and 45 minutes, according to our testing. Also included is an adapter that uses the 12V outlet in your car to charge the station in around 14 hours.

Jackery also sent two of the optional SolarSaga 100W solar panels to charge the station. They’re sold as a pair for $299. As the name implies, each panel should provide 100W of power to charge the power station. With two solar panels, Jackery estimates you’ll be able to charge the station in eight hours. We tried them on several occasions—in full sunlight, cloudy conditions, and snowstorms, and we never could get 200W of power out of the two panels. Instead, the display on the power station would show a max of 114W to 116W in direct sunlight. In the shade, that number would drop to 6W.

Instead of the eight-hour charge time that Jackery boasts, it took us closer to 15 hours of charge time on solar—in ideal conditions. We often left the panels set up outside, and ran the cables to the power station inside a garage (protected from the elements), and let it charge over a couple days of sun. It wasn’t ideal, but it worked.

The Explorer 1000 is expensive at $1,000—even more so with the optional solar panels. Jackery makes smaller versions for different budgets and needs. Still, in the end, the Explorer 1000 does it all. For someone who needs plenty of power for weekends off the grid or as a backup source, it will get the job done.