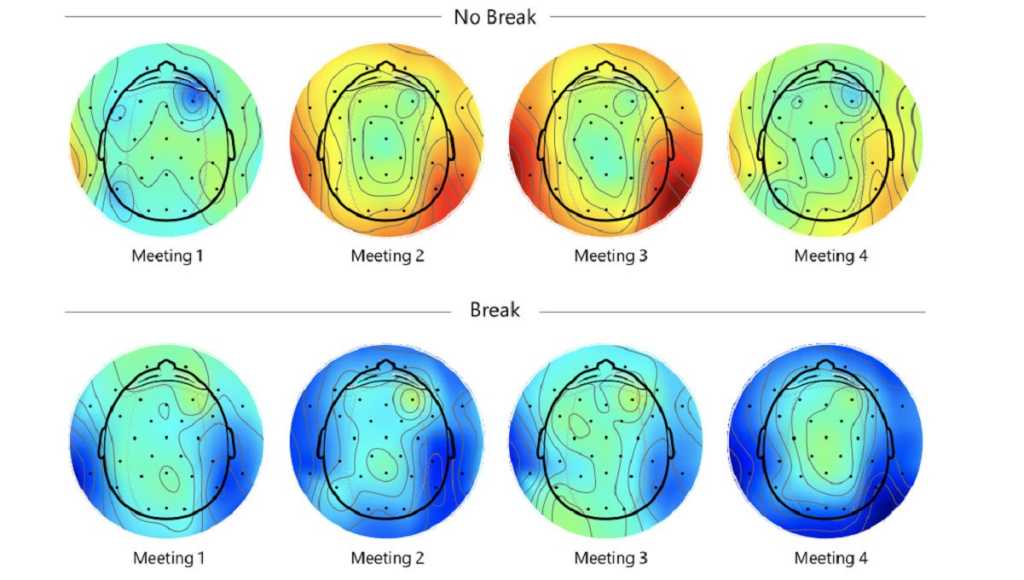 Microsoft’s research team has used science to prove what we already know—too many back-to-back meetings can wear you down—and is promoting an Outlook feature to build in scheduled breaks.

Microsoft used EEG sensors to measure the brain waves of several study participants, noting how the beta-wave activity associated with stress increased across four successive 30-minute meetings with no breaks in between. But when Microsoft re-ran the tests with an additional ten-minute buffer period between the meetings, stress levels dropped, and participation increased.

Today, Microsoft is highlighting a “shorten duration for all events” option within Outlook that can be configured at either the individual or company level. Meetings that are scheduled for a given time can be “shortened’ by letting them begin late or end early. The setting can be toggled on via the Outlook Settings menu: Calendar > Events and invitations, then by toggling on the Shorten duration for all events option.

Like many in the United States, Microsoft is now beginning to think through what life may be like in a (hoped-for) post-pandemic world. Hybrid work, blending in-person office time with remote work at home, is the future of work, according to Jared Spataro, the corporate vice president in charge of Office 365. But there’s a catch, too: “More remote work is challenging our wellbeing,” he wrote in a blog post. “Digital overload is real, and something has to change.”

Microsoft thinks part of it is as simple as building in a buffer between consecutive meetings, so the brain has a chance to reset. Microsoft’s brainwave scans actually used this time for meditation, but Microsoft isn’t recommending this approach for everyone. Instead, simply do something to shift or “turn off” your brain for a bit, like a take a walk or doodle for a minute. Microsoft’s researchers also recommend an idea that most workers would agree with: Not every “meeting” requires a meeting. Instead, a memo or even an online chat might solve the issue.

Microsoft isn’t making shortened meetings mandatory, but simply recommending it as a policy change that companies or teams can implement. If the policy is put in place, workers will see a notification appear when they try and schedule a meeting, noting the earlier time. Users will also have the option to override the limitations if they absolutely must.

The ability to shorten meetings is one of the few conveniences that Microsoft has left within Outlook. Many others have moved to Microsoft Viva, the new employee portal app that Microsoft launched in February. Beginning next week, Viva will include the employee experiences Microsoft previously announced, including the “virtual commute.” Later this year, Viva will include a “curated set of guided meditations and mindfulness experiences” from Headspace to help employees disconnect from work.

Viva will also include a reflection feature that will allow you to analyze and evaluate your own work experiences. (Microsoft says this will be kept private to individuals.) There will also be a “send praise” feature that will, according to Microsoft, “enable you to express appreciation for your colleagues and schedule praise reminders” to build good habits.