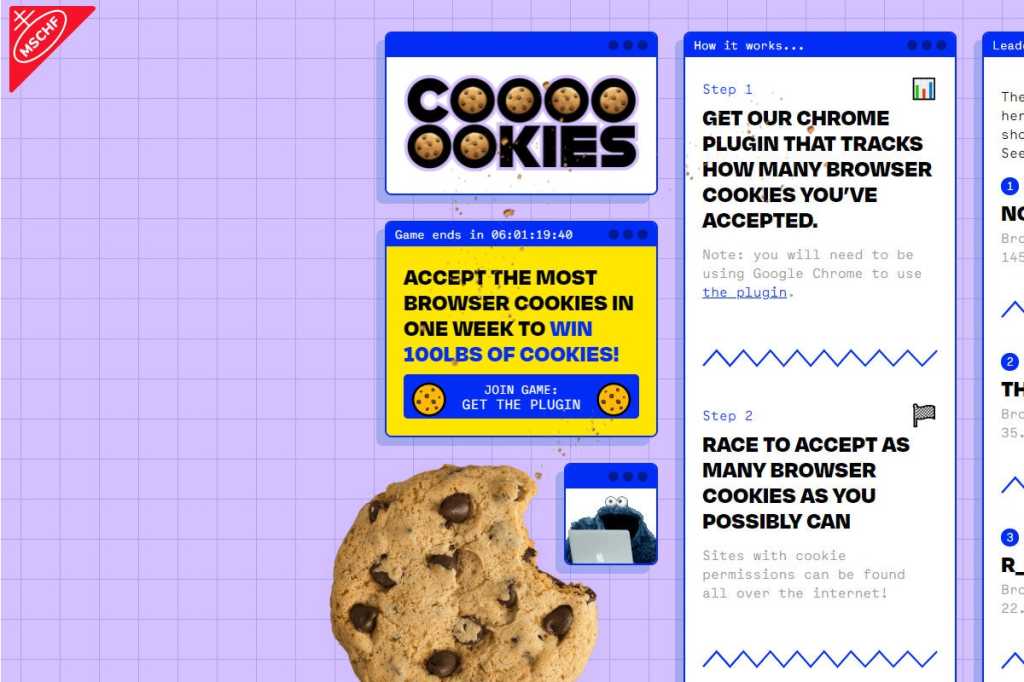 The Internet is a weird and wonderful place. The latest weirdness comes from the team at MSCHF of the Lil Nas X “Satan” shoe debacle. The Brooklyn-based art collective’s latest effort is a contest to win 100 pounds of cookies. All you have to do is gather the most browser cookies with MSCHF’s special Google Chrome plugin by Monday, May 3 at 1 PM Eastern time.

It sounds like a fun contest but don’t count on winning, as the leaderboard is already filled with shenanigans.

MSCHF announced the contest on Monday via Twitter with a link to its Cooooookies site that contains all kinds of cookie references. There’s a mock Nabisco logo in the upper-left corner, crumbs galore, and a GIF of the patron saint of cookies himself, Cookie Monster.

While the reasons for creating this race to cookie bloat aren’t made explicit, it’s likely to raise awareness of just how many cookies you end up with after a few hours of browsing. Either that or it’s just harvesting email addresses as a prank—to enter the contest you have to install the MSCHF browser plugin and supply an email address. You’re also supposed to turn off any ad blockers to maximize your cookie intake.

While it sounds like a fun game, there’s little point to hoping for a win. The contest only started yesterday, and at this writing the leader already had 145 million cookies, and 10th place was at 1.35 million cookies.

While the Internet is rife with trackers and cookies it’s hard to see how someone could pick up 145 million cookies in a single day without some automated help. That many cookies would average out to nearly 1,700 cookies per second for 24 hours. The game has been gamed, it would seem.

If you’re truly interested in seeing how you’re getting tracked around the web, then extensions like the EFF’s Privacy Badger or UBlock Origin are a better idea. They won’t give you a precise cookie count because they usually don’t block regular cookies necessary for site functions, such as staying logged in.

Nevertheless, these extensions block the worst offenders and show a per-site count of how many third-party cookies and other trackers have been stopped. That’s not quite the same thing as what the MSCHF browser extension is doing, but plugins like Privacy Badger are more effective at protecting your privacy. Plus it still gives you a jaw-dropping understanding of how much activity there is on the web to keep tabs on you.

If you decide to enter the contest anyway, you must live in the United States to receive the grand prize.