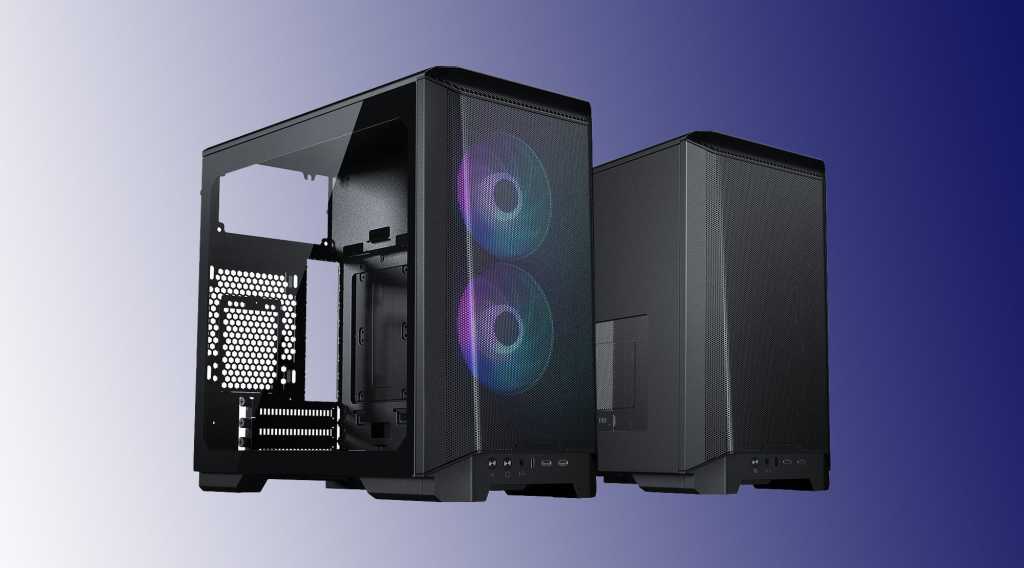 A new addition to Phantek’s Eclipse lineup of mid-tower cases aims to tempt fans of small PC builds. Announced Thursday, the Eclipse P200A shrinks the company’s airflow-focused cases down to a mini-tower that accommodates ITX and DTX motherboards exclusively, with an equally tiny starting price of just $50. An upgraded model with RGB lighting and tempered glass comes in at a modest $70.

Some mini-ITX builders might sit up at that low cost, as the cheapest small cases hover around $100. Not every PC using an ITX board seeks to take up as little space possible, after all—so while small-form-factor enthusiasts may shun the Phanteks Eclipse P200A for being “oversized” at 30L, DIYers itching to create a showy yet diminutive rig will have room to stuff in lots of hardware.

Going by the specs, you really can pack quite a bit into the P200A Performance and its fancier D-RGB variant. This case’s star attraction is the graphics card support: the P200A takes triple-slot GPUs up to 355mm in length and 65mm in thickness when mounted horizontally. That feat outdoes its closest rival, the $90 NZXT H210, which is about the same size as the Eclipse P200A but only supports dual-slot cards.

But not only do chonky video cards fit, they can also be mounted vertically: Phanteks includes the bracket needed for a vertically mounted 3-slot GPU. However, you will need to buy a riser cable separately. (Note: For this configuration, you get a little less space to work with—60mm thick cards are the limit.) Both the Performance and the D-RGB versions of the Eclipse P200A show off vertically mounted graphics cards nicely, too, as the base model has a small windowed section in its otherwise solid left-side panel, and the RGB model’s left-side panel is pure tempered glass.

Cooling is also a large priority for this tiny case. Up to seven fans can be mounted—either all 120mm or two 140mm plus five 120mm—plus radiators at the front (up to 280mm), side (up to 240mm), and rear (120mm). Fans of air-cooled CPUs get 165mm to work with when the GPU is horizontally mounted, and either 72mm or 92mm with a vertically mounted card depending on which PCIe slots are populated.

This case also comfortably houses full-sized ATX power supplies, with a recommended clearance of 190mm and a maximum clearance of 205mm for length. For storage, you can install up to four 2.5-inch SSDs and up to four 3.5-in HDDs after the purchase of optional brackets, depending on your configuration.

Ports are the only oddly minimal thing about the P200A. The Performance version comes with just two USB 3.0 Type-A ports, a combo microphone/headphone jack, and power button. The swankier D-RGB model gains an additional USB 3.1 10Gbps Gen 2 Type-C port, plus buttons to control the color and lighting effect of the ARGB fans.

While the lack of micro-ATX motherboard support in a case of this size is a little surprising, the Phanteks Eclipse P200A’s spacious interior seems well-suited for mini-ITX builds that want to mimic the look of larger builds without replicating their footprint—or their high cost. The P200A is notably cheaper than its rivals, as both models include two 120mm fans. The Performance version comes with two 120mm PWM fans as part of the $50 sticker price, while the D-RGB version’s $70 MSRP includes a tempered glass panel, a wider assortment of front panel I/O, and two 120mm ARGB PWM fans.