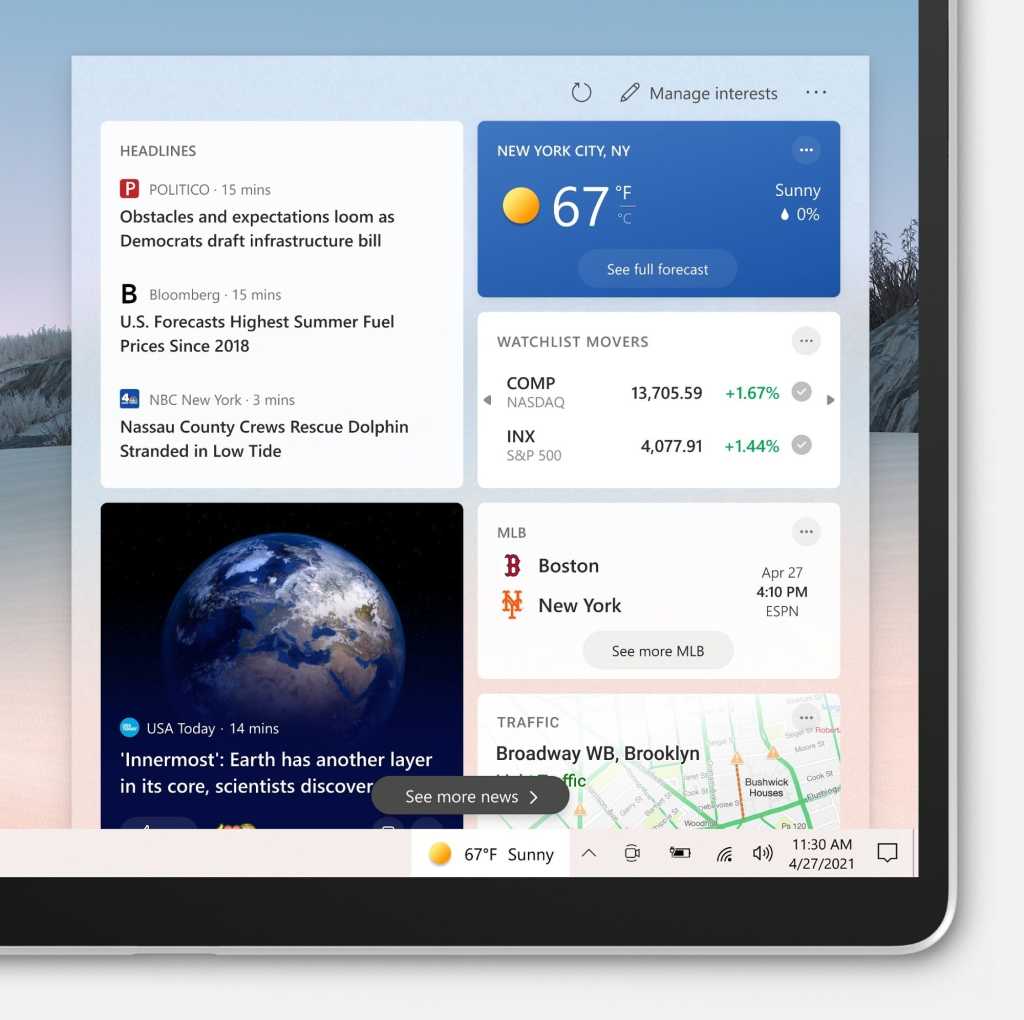 Microsoft said Thursday that the company plans to migrate its News and Interests feed to all Windows 10 users, adding a small weather icon to the Windows 10 taskbar that can expand into news and interests.

In January, Microsoft unveiled “news and interests” as an addition to Windows 10 Insider Build 21286. That build was part of the Dev Channel, where new code is tested before it’s deployed (or not) in a future build of Windows. In this case, it will be deployed—you’ll start to see “news and interests” hit your Windows 10 taskbar over the course of the next few weeks.

Here’s what you’ll see in the new change. “News and interests” will add a small icon on your taskbar that will show the current temperature and forecast, in a compact format: “66 Cloudy,” for example. Clicking the icon will open up an expanded forecast, but also a curated list of news and interests that Microsoft’s Bing services thinks you’ll like.

Don’t like it? You can turn off the feature, too.

In a day and age where more and more newsrooms are deservedly asking subscribers to pay for quality journalism, Microsoft’s Bing news service represents a free, curated feed from The New York Times, Washington Post, or others, all for free. Bing embraces the “modalities” approach that Windows 10 has emphasized, allowing you to search for news via keyboard, mouse, touch, pen, and voice. Bing also has a bunch of ways to  see relevant news and interests: a new-tab page within Edge, dedicated apps, or now your taskbar.

Microsoft says that they’re rolling out the new Interests feature as part of the April 2021 cumulative update preview for Windows 10, and availability will occur in phases. You’ll need the fall 2019 update of Windows 10, version 1909 and above.

How News and Interests works in Windows 10

Fortunately, you can get started right now. If you’re signed into Microsoft Edge, you can visit the ”My Feed’ settings page to get an overview of what news and interests you may want to see. You’ll have a choice of four “cards:” local weather, stocks, sports, and local traffic. All of these can be toggled on or off.

A separate ”interests” page allows you to tweak the content in each of those sections. Do you want to see news on MMA, pets, cooking, and Atlanta? All of these can be configured, either via clicking a box or entering a search term at the top of the page. You can also “follow” publishers that you’d like to see more of, and hide those you don’t.

How to control news and interests in Windows 10

If you’re into what Microsoft has planned for your taskbar, you’ll be ready to roll once it goes live on your PC. If you’re not, here’s how to turn it off, based on our interaction with the News and interests feature on Microsoft’s Windows Insider build: Right-click the “news and interests” icon in your taskbar, then navigate down to News and interests in the menu. From there, you can select Turn off, or Show icon only to reduce the screen space it takes up. (Microsoft says that what you’ll see in Windows isn’t exactly the equivalent of the Insider experience, but it’s presumably close enough.)

News stories will open in their browser window. The local traffic report will as well, rather than the Windows Maps app.

It’s not clear how often the news will refresh, though you can manually click an icon to cycle through news stories. If you’d like, you can use the taskbar options to reduce the frequency of new stories.