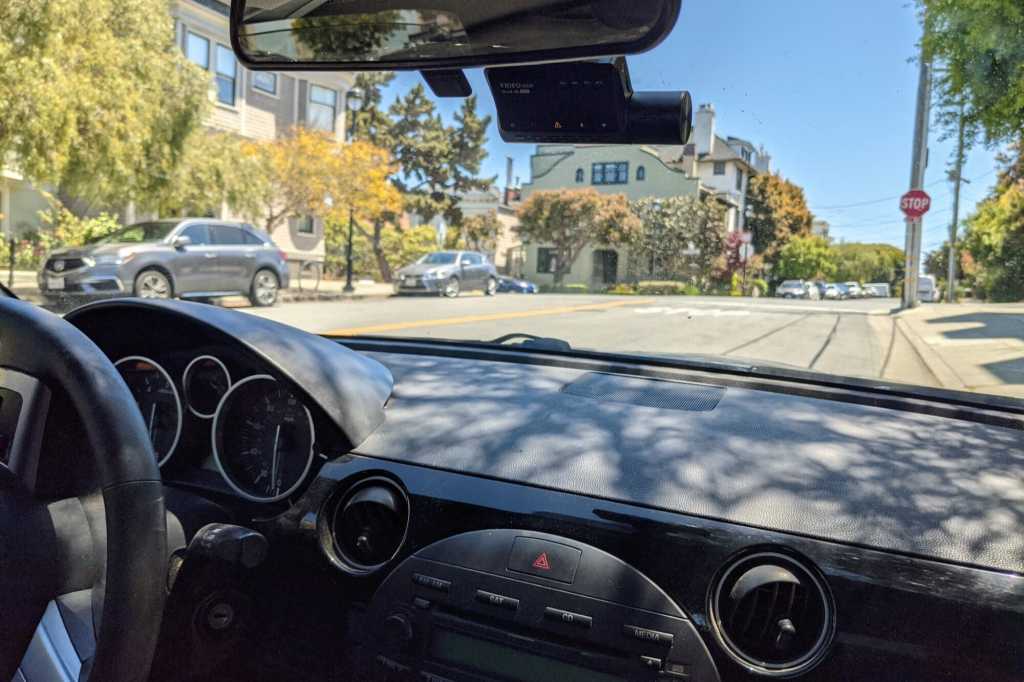 How do you install a dash cam? After so many years of dash cam reviews, experience has shown there’s more to it than inserting the SD card, slapping the camera on the windshield, and plugging it into a power source. I’ve made every mistake in the books. Learn from my experiences with this step-by-step guide.

Where to place your dash cam

Your new dash cam came with either a suction mount, or a mount that uses semi-permanent adhesive. If it’s suction, you can trial-and-error camera location until you hit the most convenient placement. If you’re dealing with sticky stuff, consider more carefully—you’ll likely get only one or two shots at it. 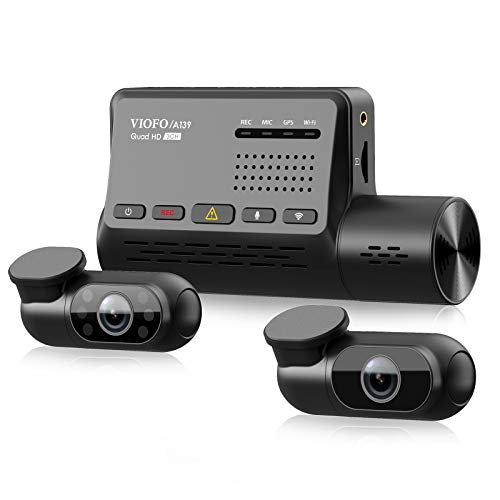 You want the camera as close to the centerline of the car as possible for maximum coverage to both sides. There are also laws governing obstruction of the driver’s view. The rule of thumb is, as unobtrusive a location as possible.

Either of these two locations tends to work best:

If your dash cam has an integrated interior camera, higher is better, as t–his will allow it to capture more of the interior, especially the back seat. You must also make sure that the interior camera and the the infrared lights surrounding it aren’t obstructed by the rearview mirror. I have mounted a front/interior camera thinking it was fine, only to discover that the rearview mirror blocked infrared to the driver’s side. Generally, you’ll need to drop the dash cam slightly below the rear mirror. 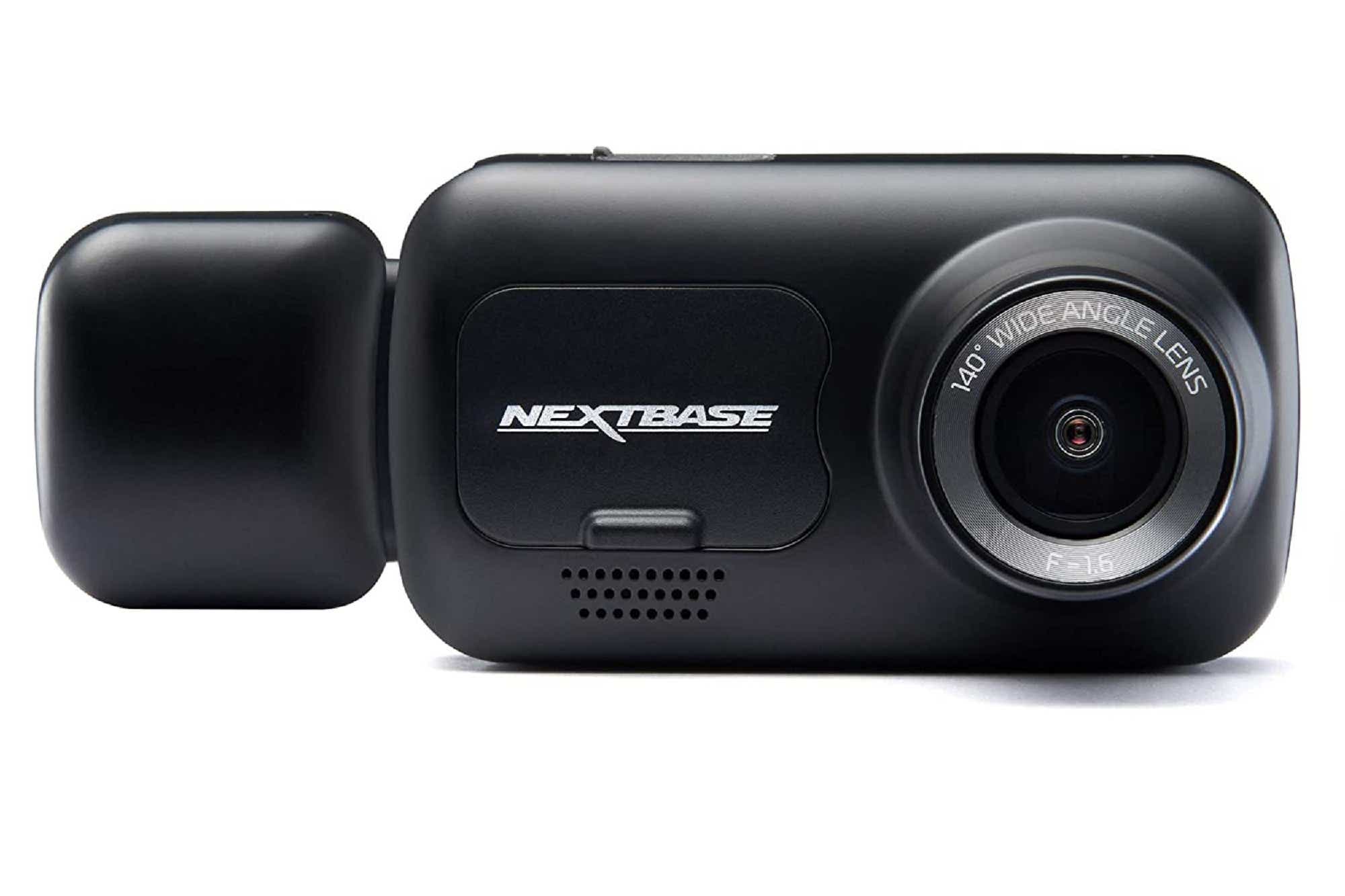 Note that we’ve just reviewed our first dash cam that employs a discrete interior camera, the Viofo A139 (shown above). This lets you place the interior camera independently of the larger main camera, so you don’t have to compromise.

Aligning the dash cam to the horizon

If you’re using a suction mount, you can skip this part and just keep trying until you get it right. If you’re using an adhesive mount, placement and orientation must be as close to level as possible, especially if the camera mounts flush against windshield like the Viofo A139 in the photo above. If the adhesive mount is simply the base for a normal articulating mount, fine placement isn’t quite as important. 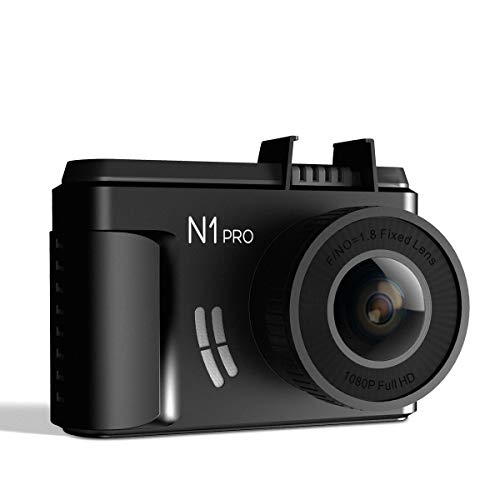 The curve and slant of the windshield make accurate placement by eye trickier than you might think, especially if you’re in a bucket seat to one side. Let tools help you out. Some phone cameras offer a level function, and some dash cams have an install assistant that shows you correct alignment on the integrated display or phone app. If this type of help is available, attach the sticky mount to the dash cam, remove the protective plastic from the adhesive (see the caveat below to ease that chore), and carefully align the dash cam as guided.

The sticky mount allows little margin for error. If you press very lightly when you first attach the mount to the windshield, you might get a second, or third, chance at correct placement. When you have it aligned correctly, press more firmly. I’ve acquired a feel for this that a first-timer might not have, so follow the method below to minimize mistakes.

If modern options like the phone or onboard help aren’t available, you can go old-school with a carpentry level and minimally sticky painter’s tape. I stick the edge of the painter’s tape to the level, carefully aligned, orient the level (bubble in the middle of the two marks), and press the bare tape to the windshield.

Roll the level away and up to detach the tape from it and press it down. Works like a charm. The images below might give you a clearer idea.

When you finish it should look something like what you see below. Use the tape as your guideline for placing the dash cam.

By far the most problematic aspect of installing a dash cam for me has been getting that darn protective plastic sheet off the adhesive pad. When it’s warm, it just doesn’t seem to want to part company.

To avoid this frustration, I pop the adhesive pad (generally pre-attached to the mount) in the fridge for a couple of minutes. Once you remove the protective cover, guard the adhesive pad from schmutz, as that will affect the strength of the join.

After you’ve mounted the dash cam, the next step is to run the power and other cables (GPS, rear camera, etc.) There are four different locations you can pull power from: the cigarette lighter/auxiliary port, a powered rearview mirror, the OBD-II connector, and the wiring harness under your dash.

The easiest but most obtrusive source is the ubiquitous auxiliary/cigarette lighter port cable. (Most are USB cables with non-captive charging adapters).

If you’re not worried about style points, just plug the cable into the camera, then into your auxiliary power port. The cable hanging down is ugly and distracting, and there are far more elegant solutions.

As your dash cam is likely to wind up close to the rearview mirror anyway, if said mirror is powered, you’re golden. A power splitter such as those available from Dongar eliminates the need to run a cable more than a couple of inches. Note that these powered mirrors do not supply constant power by default.

Like the cigarette lighter/auxiliary cables, the next two types of power connections, OBD-II and hard-wiring, require running cables around the dash and cabin. But there’s one important difference: Providing constant power via either source will run down your car battery. How fast depends on the camera. Parking modes that only wake the camera upon the g-sensor being tripped will take a long time. Always-on surveillance may drain it within a day. Better dash cams will sense a drop in voltage and power down. Whatever the case, we do not recommend always-on surveillance.

As your OBD-II port is usually somewhere under the dash, you can run a cable there more discreetly.  Simply tuck the cable into the crevice where the windshield meets the dash, then around the door molding and into the port.

Note that the the OBD-II port is powered even when the car is turned off, so this is a great alternative to hardwiring if you’re using your dash cam’s parking surveillance features. Only a few dash cams come with OBD-II cables, but you can buy your own for less than $20 online.

Hard-wiring requires affixing a ground wire and tapping a 12-volt feed in the wiring harness. Most dash cam vendors sell hard-wiring kits for about $20. I recommend OBD-II as far easier and less dangerous to your vehicle’s wiring and functionality.

As with front cameras, you want your rear camera as close to the centerline of the vehicle as possible for best coverage. Being farther away, rear window cameras and their accompanying cables won’t obstruct your view as front cameras might.

The good news with rear cameras is that you generally have built-in horizontal guidelines in the form of rear window defroster wires. However, make sure the lens is aimed between them, or you’ll have a blurry line through your captures.

Also, unlike front cameras, I’ve found that rear cameras don’t always make it apparent which side faces up. Read the installation guide (if one exists and covers the topic—many don’t), or install the front cam first, attach the rear camera, and then inspect the live image on the dash cam display or phone app.

Most drivers don’t want wires obstructing their view or cluttering up the cabin. You might have to live with a short run of cable visible against the windshield, however, you can hide the rest by tucking it somewhere convenient, such as behind the rearview mirror, under molding, beneath the carpet or seats, or around and behind the rear seat.

Peruse YouTube and there’s likely someone who’s run wires for your car or a similar vehicle. If you’re not into pinched fingers, by all means employ the spudger/crevice cramming tool that many vendors provide. See the image below.

When removing or bending molding, take your time, and follow the cardinal rule of disassembly: If it doesn’t feel like it’s coming off as easily as it should, double-check for screws or other fasteners. Also, the Internet is your friend!

You’d think inserting SD cards would be a no-brainer. I say nay! With my short fingernails, seating the card safely into the deeply recessed, spring-loaded slot isn’t a sure thing. At least twice, I’ve watched a black SD card fly across my black interior to land who-knows-where. I especially love when this happens at night. My hard-won tip: Point the SD card slot toward your chest. Worst case, the card hits your chest and drops in your lap.

There you have it: the sum total of my years of experience screwing up, then fixing dash cam installations. Use this article (and our dash cam review roundup) as a guide, give your needs some thought, purchase the dash cam that’s right for your car, and take your time. It’ll be alright. I promise.