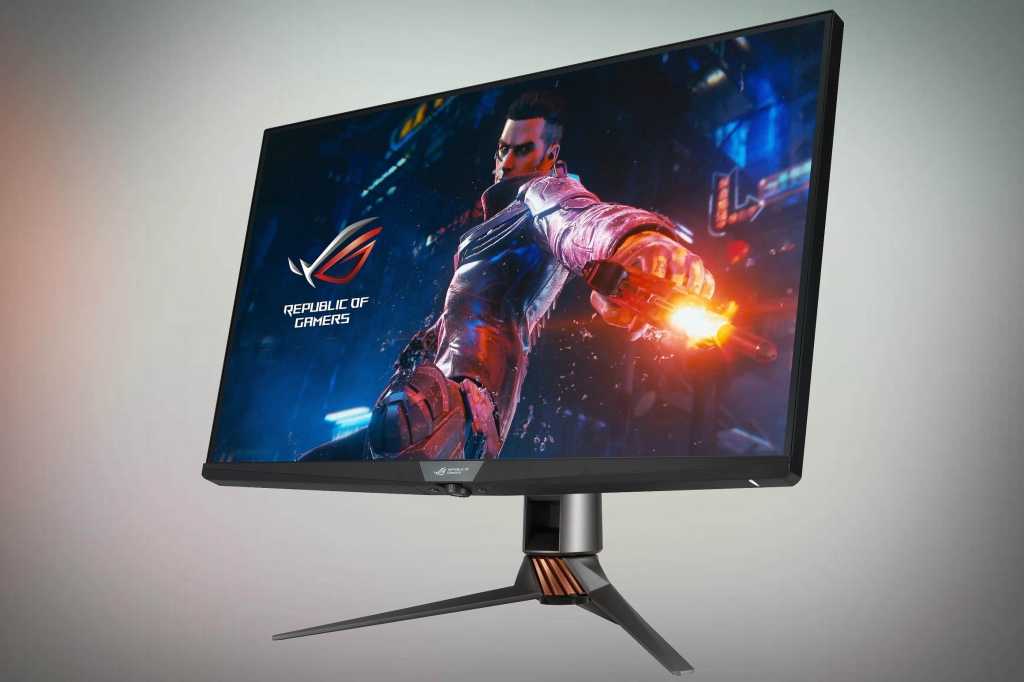 If you’re the kind of person who puts doing work ahead of playing games, you’ll understand why I think the Asus ROG Swift PG32UQX might be the perfect monitor.

That’s probably just alphabet soup to regular people, so let me translate it for someone who works more than they game—but is tired of staring at compromise every day in the form of some random 1080p LCD.

The top feature of the ROG Swift PG32UQX is its use of miniLEDs. These smaller, highly efficient light sources are still rare in PCs—we just saw the MSI Creator 17, the first laptop with a miniLED display. Each of those miniLEDs means the ROG Swift carries a DisplayHDR 1400 logo and can hit a peak 1,400 nits in its 1,152 zones.

That brightness in game has to be felt to be appreciated. I actually got to see the pre-production version as far back as CES 2020. Let me just say that when there’s an explosion or a burning pile of wood in a video game, you don’t see it—you feel it, in person.

If I had this display, most of the time I’d just be using it to edit photos or run desktop apps, with the brightness set to about 500 nits. But when I’m ready to game, the brightness is there.

The panel technology itself is in-plane switching (IPS), known for its wide viewing angles and good color reproduction. Asus says the ROG Swift PG32UQX supports 98 percent of the DCI-P3 color gamut and is factory-calibrated. It’s also a “true” 10-bit panel and uses quantum-dot technology. All this matters to people who want color accuracy and aren’t willing to make the sacrifice for a “gaming” panel that’s great for gaming, but not so great for working.

The ROG Swift PG32UQX is also 4K panel that isn’t overkill. A 4K 24-inch display is ludicrous, and maybe it’s my eyes, but a 27-inch 4K panel is problematic too. With a 32-inch diagonal width, you get the perfect balance of high pixel density and enough screen so you can actually see those pixels. You’re getting enough magnification that even old, tired eyes won’t complain. Better yet, the screen features an anti-reflective coating to minimize glare and eye-strain while working.

What makes the ROG Swift PG32UQX a gaming panel, though, is its support for G-Sync Ultimate. Yes, that means AMD Radeon fans are out of luck, but if you run a GeForce graphics card, the panel will sync up variable refresh rates all the down to 1Hz. That’s especially useful for those who want to play a game at the native 4K resolution, where it’ll appear the sharpest, but want the chuggy parts of a game where frame rates dip to 42 fps to be less annoying.

I also appreciate that while many 4K monitors for work typically top out at 60Hz, the ROG Swift offers up to 144Hz refresh rates. That falls far short of panels that can run at 360Hz, but most of those panels aren’t going to offer 10-bit, factory-calibrated color accuracy either.

For ports, the ROG Swift gives you one DisplayPort 1.4, three HDMI 2.0b,  three USB 3.0, one USB 2.0, and a 3.5mm analog headset jack. The three HDMI 2.0b ports would be limited to 4K@60Hz which is the maximum of the spec. The single DisplayPort 1.4 would max out at 4K@120Hz but by supporting VESA Display Stream Compression the panel will hit its 4K@144Hz resolution and refresh rates.

The panel also supports a VESA mounting system and includes a tiny OLED for monitor status on it. Even niftier: There’s a tripod socket on top for mounting camera and a USB-A on top as well to plug that camera in to.

Is it the ultimate production panel? No, far from it. There are displays likely far better suited for production work. But most of those aren’t exactly great gaming panels either. What you get here is just the right amount of features to make both working and gaming equally joyful.

The biggest complaint by all will be the price.  While my mouth says Yes, my wallet says No, because the list price of the ROG Swift PG32UQX is $2,999. Although we were initially told the panel would cost $2,999.99, Asus will give you deal and let you keep the 99 cents.