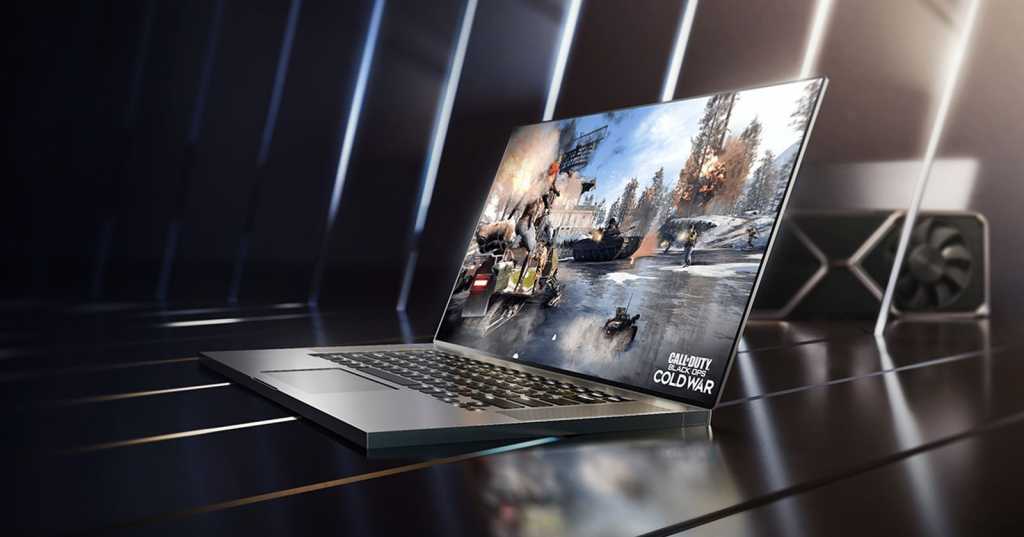 Samsung’s loose lips whispered the truth: On Tuesday, Nvidia announced new GeForce RTX 3050 and 3050 Ti laptop GPUs designed to bring ray tracing, performance-boosting DLSS technology, and supercharged creative capabilities to the mobile masses. Nvidia timed the announcement to coincide with Intel’s reveal of its heavy-duty 11th-generation Core H-series processors, and the company says the RTX 3050 GPUs will appear in notebooks starting for as little as $799.

The GeForce RTX 3050 and 3050 Ti bring Nvidia’s advancements to even lower price points. Ray tracing might be the most eye-opening feature, but DLSS 2.0’s magical AI-enhanced gaming speeds and the vastly improved performance in creative applications that can leverage those dedicated AI and RT cores could truly shake things up in the sub-$1,000 laptop market.

To drive that point home, Nvidia announced a wave of new RTX Studio laptops with seven designs that include the GeForce RTX 3050 or 3050 Ti. New Studio notebooks with higher-end Nvidia graphics options and Intel’s new chips will also hit the streets in the coming weeks, claiming up to twice the rendering performance of prior-generation models.

The creative goodies aren’t limited to professionals, either. Nvidia Broadcast uses machine learning on tensor cores to spruce up the look of your Twitch streams and YouTube videos, with features like background noise cancellation and AI green screens. Those features will work on RTX 3050-series and Studio laptops alike. To sweeten the pot, Nvidia also announced that Broadcast can now silence the sound of pets and cicada swarms via an update that’s being pushed out today.

While those RTX features should make a splash in the mainstream price range, don’t expect the performance uplift in traditional games to be quite as revolutionary, though the RTX 3050 family should provide a nice boost versus the GTX 1650. Nvidia is pitching these modest GPUs as solid options for 1080p gaming at 60-plus frames per second, even with ray tracing enabled in some games thanks to the amazing power of DLSS 2.0. (Prior-gen GTX 1650 notebooks lacked ray tracing or DLSS support.) These laptops could also see extra performance in select titles thanks to the inclusion of PCIe Resizable BAR technology, which is standard in RTX 30-series laptops.

The GeForce RTX 3050 and 3050 Ti each come with 4GB of GDDR6 memory over a 128-bit bus, and both run on between 35 and 80 watts of power. (Nvidia’s variable power configurations make shopping for a gaming laptop much harder now.) The GPU tech specs show that the RTX 3050 and RTX 3050 Ti will likely be quite a step down from the gaming performance of existing RTX 30-series laptops.

While the laptop version of the RTX 3060 packs 3,840 CUDA graphics cores to power no-compromises 1080p and superb 1440p gaming experiences, Nvidia says the RTX 3050 Ti will include 2,560 cores, while the RTX 3050 comes with 2,048. Those cores come with clock speeds over 200MHz slower than pricier RTX 30-series Laptop GPUs, though the boost clock speeds often achieved during gaming hang in the same ballpark as those from beefier cousins. The wattage and cooling capabilities of your chosen laptop will likely play a large part in how fast your RTX 3050 goes.

All told, these GPUs look like they’ll offer solid Medium- to High-quality 1080p gaming experiences for the price, though we’ll need to test RTX 3050 laptops ourselves to be sure—especially given the wide range of available wattages, which can significantly impact performance. Nvidia did not reveal any performance metrics for the RTX 3050 either, only the 3050 Ti. As modern GeForce platforms, RTX 3050 notebooks also support the wonderful latency-reducing Nvidia Reflex feature in select competitive games. Laptop makers can choose to implement Nvidia’s various third-gen Max-Q technologies (like an upgraded Whisper Mode and Dynamic Boost 2.0).

Nvidia said RTX 3050 laptops will start at $800, while RTX 3060 laptops already start at $1,200. Don’t be surprised if RTX 3050 Ti gaming notebooks slot right into the middle at $1,000. Nvidia also said that existing GTX 1650 laptops will continue to be sold while mainstream notebooks transition to these fresh RTX 30-series offerings. If you’ve been struggling to find a graphics card, maybe a new gaming notebook could be just what the doctor ordered?