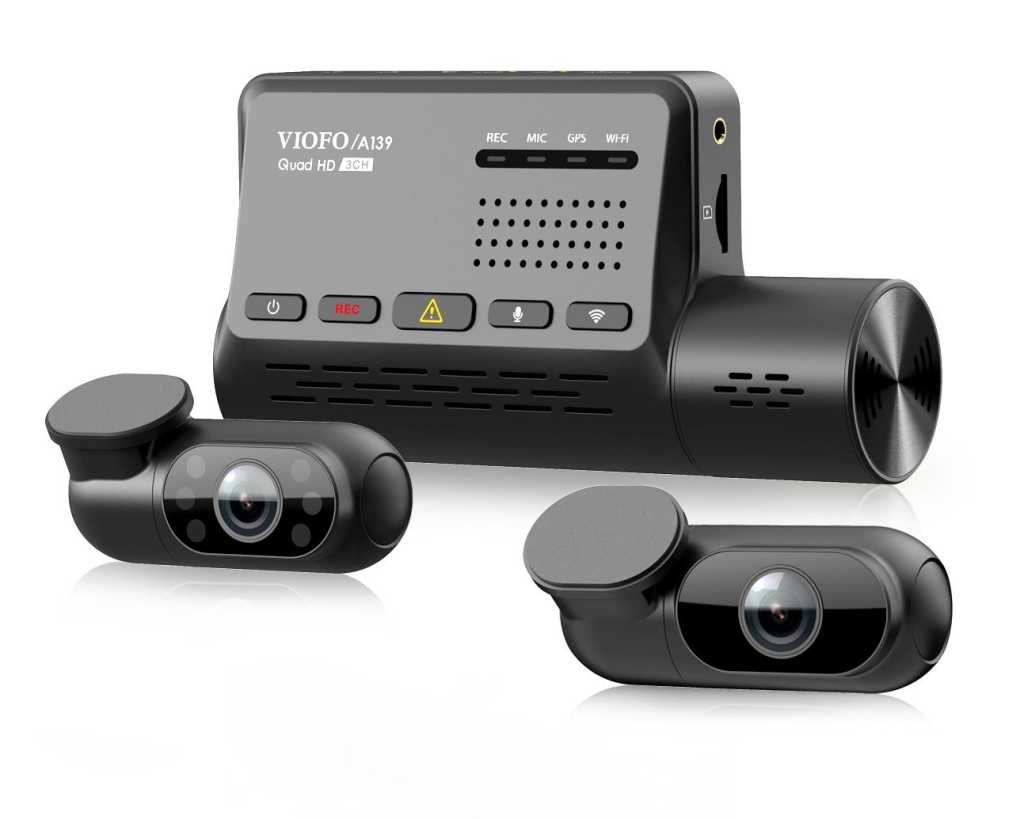 The Viofo A139 3CH 3-channel camera is unique for its discrete interior camera (most are integrated with the front camera). It’s versatile for placement, but it adds another cable. It wuold be a good fit for ride-giving pros. It takes great video from all angles, and it interfaces nicely with your phone.

Viofo’s A139 3CH three-channel, three-camera dash cam system is a first in our experience. We’ve tested three-channel products before, but the interior camera has always been integrated into the same body as the front camera. Viofo’s is separate, as is the rear camera.

The upside to this discrete interior camera approach is versatility in locating each camera. The downside, though easily surmountable, is that you have more cables to hide.

The A139’s three cameras are also notable for their high resolution. The 140-degree FOV front camera is 1440p, while the 170-degree cabin (interior) and rear cameras are both 1080p. All manage 30 fps while recording simultaneously, which means there’s a fair amount of processing power under the hood. High-quality Sony STARVIS IMX335 sensors are used by all three cameras.

The main (forward) camera body uses a sticky mount. The camera attaches/detaches from said mount by sliding to the left or right. There’s no adjustment once mounted (place carefully!), and there’s no display. Instead of the latter, the A139 relies on a Wi-Fi-connected phone app for displaying live views and changing settings. Feedback is provided by status lights, voice, and other audio clues.

On the back of the main camera are power, record on/off, emergency record (save), the microphone on/off, and Wi-Fi buttons. You must connect to the phone to change the numerous other settings, and you can’t record while doing so. Small matter–you shouldn’t be driving while using your phone anyway.

There’s quite a bit in the box to support three cameras, as you can see below.

As I mentioned, the most problematic aspect of the A139 is the cabling. The cables are thin, and they snap into place using mini COAX connectors. How much of an issue they’ll be depends on where you place them.

With most cars, you’ll want to hide the main camera behind the rearview mirror (use an adapter to power the A139 if the mirror is powered), and the interior camera somewhere high up on the windshield so it covers as much of the back seat as possible. Viofo thoughtfully includes a spudger/crevasse tool for tucking the cables away behind molding.

The notable feature of the interior camera is the infrared array–six lights surrounding the lens. Otherwise, as you can see in the two upcoming images, it’s a dead ringer for the rear camera.

The A139’s camera is nothing special, though it does take some of the best video we’ve seen for a unit peering out your back window.

Other features include integrated GPS (embedded in the video and watermarked on the video), a parking mode, and a polarizing filter. The latter increased reflectivity somewhat, though it did tamp down glare from the sun.

As you can see below, the A139’s daytime captures are excellent, offering a very wide, 140-degree field of view without much fisheye distortion.

Viofo includes a polarizing filter, but during everyday use (as shown below) it increased the intensity of the dashboard reflections quite a bit.

The A139’s low-light captures (shown below) aren’t half-bad. Note that it was impossible to keep the windshield completely clean with the San Francisco marine layer hitting the car off and on. Note the exceptional color depth. And that’s without WDR (Wide Dynamic Range) enabled. It was not nearly as light out as the image below would make it seem.

Rear captures are as good as the front captures, albeit with a touch less detail (1080p versus 1440p). Note that the band running horizontally across the image below is a defrosting heater wire, not an issue with the camera. Place yours better.

You can really appreciate the wide angle of the rear camera lens when you see the night shot below. Again, moisture is responsible for some of the halos.

In the first daytime interior shot below, notice that the view is so wide, you can see the main camera and buildings overhead. There was no room higher on my small, steep windshield or I’d have placed the camera higher. If I’d used the phone to check the view, I would have aimed the camera lower. One of the foibles of life without a display on the camera itself.

At left in the interior night capture below, the sloppy cable run that fell out of the molding in my car presents a teachable moment. I was in a hurry, okay?

In summary, there’s nothing to worry about when it comes to video quality with the A139. Thanks to the wide fields of view, the system covers nearly all your car’s surroundings and interior, and the results are nicely detailed and colorful.

The Viofo A139 3CH is an easy Editor’s Choice. It takes fantastic video. With the exception of the Nextbase modular cameras with their telephoto rear cameras, the A139 is my new favorite. The discrete design lets you mount the cameras at their best possible vantage points, especially helpful for ride-givers who want to keep an eye on what’s going on in the backseat. If you want to track everything in and around your car, the A139 3CH has you covered.