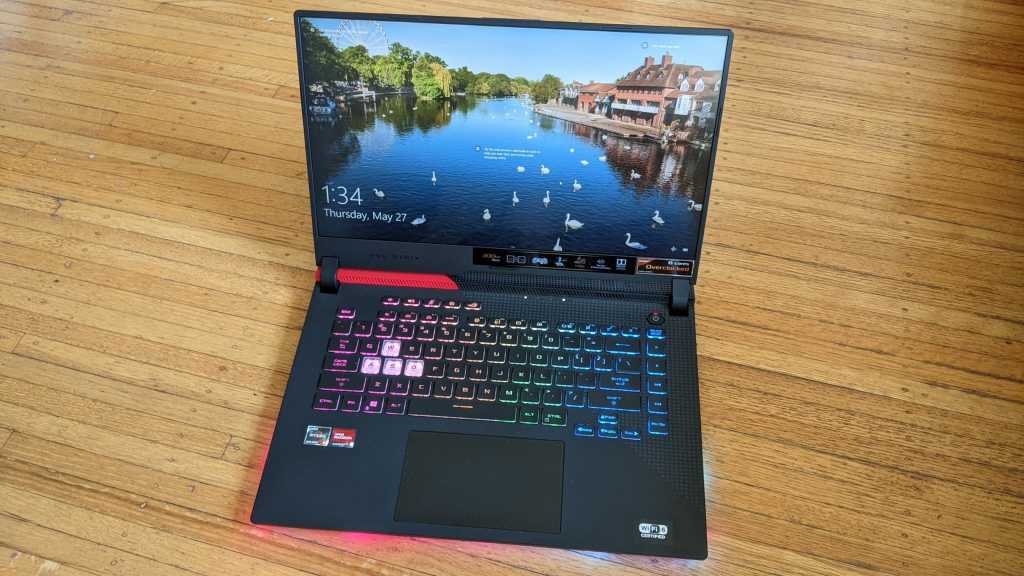 We’ll say this as a public service announcement right now: If you’re on the hunt for an affordable yet stupidly fast laptop on a medium budget, you may want to skip the rest of this and simply buy the Asus ROG Strix G15 Advantage Edition right now ($1,650 at Best Buy) because of its stunning price-to-performance ratio.

If you want to be a little more cautious and actually finish this review, we’ll first break down what’s inside.

Asus doesn’t skimp with the ROG Strix G15 Advantage Edition. Considering the price, the 16GB of DDR4/3200 RAM and 512GB NVMe SSD are solid components, actually very typical of this price range. If they’re not enough for you, both could be upgraded at a later date. Heck, the laptop even comes with Windows 10 Professional, which can cost $60 to $70 or more on most laptops. Here’s the longer spec list:

The ROG Strix G15 Advantage Edition locates most of its ports at the rear (see image above), including:

Like every AMD laptop we’ve seen, USB-C port doesn’t include Thunderbolt support, but it does have DisplayPort as well as USB-Power Delivery up to 100 watts.

The right side of the laptop doesn’t feature any ports, which makes sense for the majority of gamers who are right-handed (sorry, southpaws). Asus does integrate another pair of USB-A ports on the left side (see image below), along with an analog combo jack.

We should warn you that if you’re looking for an thin gaming laptop with an all-aluminum body—the ROG Strix G15 Advantage Edition isn’t it. The lid and keyboard deck are aluminum, but the bottom and sides are unabashedly plastic.

It’s also relatively chunky, at about 28mm (1.1 inches) at its thickest point (not including the feet). That’s not necessarily a bad thing, as thicker laptops tend to allow more room for cooling. We’ve seen many thinner laptops struggle with thermal throttling as their components heat up.

The 280-watt AC adapter can justifiably be called a ‘power brick’ considering its 2.1-pound weight. You could also power the ROG Strix G15 on a 100-watt USB-C charger, but don’t expect the same experience compared to the full-fat charger.

In the case of the ROG Strix G15 Advantage Edition, Asus puts the thicker, plus-sized body to work in cooling. In a “first,” the company said it has actually used the more efficient liquid-metal thermal interface material on both the CPU and the GPU. Laptops with more efficient liquid metal on the CPU have been available for a few years now, but no one until now has used it on the GPU. Vendors have always told us it made more sense to use it on the heat-intensive CPU.

The trackpad on the ROG Strix G15 Advantage Edition is fairly smooth, with Microsoft Precision driver support. Our unit had a slight trackpad “bounce” to it, which we’ve seen occasionally when the trackpad isn’t firmly mounted, resulting in a slight rattle. We think it’s an anomaly of our unit but are obligated to mention it.

The keyboard is a standard rubber-dome keyboard with decent travel and no major layout issues. The backlighting of the keyboard is RGB, but zone-lit, rather than per key. Asus does such a wonderful job with the rainbow unicorn vomit that most people won’t know the difference. There’s also perimeter RGB lighting around the base of the laptop.

We first want to compliment Asus for its pair of four-watt speakers. Compared to many 15.6-inch gaming laptops we’ve tested, they offer far more bass, mid-range and presence than most smaller gaming laptops do. You can again thank the larger body for that, because more space for speakers typically means better audio.

One problem we found was with the laptop’s webcam, which you can see compared to MSI’s GE76 Raider’s 1080p webcam (upper left) and the 720p webcam of an HP Elite  Dragonfly (upper right.)  As you can see, the webcam in the Asus ROG Strix G15 Advantage Edition (bottom left) offers impressive OLED-like deep black levels.

We’re kidding! The Asus ROG Strix G15 Advantage Edition—a new laptop being offered in the year 2021—does not have a webcam. We could understand, if not agree with, the company’s rationale for omitting a webcam from the Asus ROG Zephyrus G14: Real gamers, Asus suggested, would buy their own high-res webcam. Consider that the ROG Zephyrus G14 was introduced at CES in January, 2020, in those last innocent days before the pandemic began a wave of lockdowns, remote working, and social distancing. We barely cared about webcams before then. Now, nearly 18 months on, omitting a webcam from a laptop seems ridiculous.

We’ve already tested Ryzen 5000 and specifically the Ryzen 9 5900HX, as well as the Radeon RX 6800M that are featured in the ROG Strix G15 Advantage Edition. To see how they all work together in this laptop, we’ll start with some CPU tests.

The score from Maxon’s older Cinebench R15 pretty much says it all. This 3D modelling test favors high-performance cores. The ROG Strix G15 Advantage Edition wins big even against laptops that weigh more or use desktop CPUs.

The vast majority of software does not use all of those cores, though, so it’s important to get a feel for just how fast the CPUs are at single-core or single-threaded tasks. The ROG Strix G15 Advantage Edition again shows very well—only the Asus ROG Flow X13 and its Ryzen 9 5980HS surpass it. We haven’t yet completed a formal review of Intel’s Tiger Lake H laptops, but based on our review of the Core i9-11980HK we expect that Intel’s 11th-gen CPUs will make this fight more interesting.

Our final CPU test uses an older version of HandBrake to convert a 30GB, 1080p movie file using the Android Tablet preset. You can again see the red bar takes slightly less time to convert the file than a desktop Core i9-9900K CPU mounted in a much larger laptop. Ryzen 5000 is the real deal.

Moving on to graphics performance, the big question is how does AMD’s Radeon RX 6800M do against what has largely been an all-Nvidia show for years now?

Pretty good, actually. The Radeon RX 6800M doesn’t outpace the higher-wattage RTX 3080 Laptop GPUs, but it’s a worthy competitor for conventional gaming tasks, as you can see from the results of the graphics subscore of 3DMark.

Moving on to gaming, we first run Rise of the Tomb Raider at 1920×1080 resolution set to Very High and in DX11 mode. You can see the ROG Strix G15 Advantage Edition’s performance doesn’t rank quite as high, but it’s in the neighborhood of the Asus ROG Flow X13 with the external GeForce RTX 3080 Laptop at 150 watts, and not too far behind the Gigabyte Aorus 17G with its GeForce RTX 3080 Laptop GPU at 105 watts.

Rise of the Tomb Raider is fairly old at this point, though. Once you move to more modern and strenuous games, the gaps close up more. As you can see below, using Metro Exodus with the Extreme Preset, the ROG Strix G15 Advantage Edition is right in the ballpark with a lower-wattage GeForce RTX 3080 Laptop part, as well as a midrange-wattage GeForce RTX 3080 Laptop part.

We again recommend that you read our review of the Radeon RX 6800M for more in-depth testing of the ROG Strix G15’s GPU, but we can summarize it as a very worthy competitor for the vast majority of games people play. If, however, you move to games that use Microsoft’s DirectX Raytracing, Nvidia’s GeForce RTX 3080 Laptop GPU has a clear advantage. Nvidia also has an advantage in many content creation applications. But for most gaming situations, Radeon RX 6800M stands quite well.

Our last test looks the battery life of a laptop by measuring how long it can loop a 4K video while in airplane mode, with earbuds connected at medium volume and the screen set to a relatively bright 250 to 260 nits. For gaming laptops, we also shut off the RGB while looping the video.

The Asus ROG Strix G15 Advantage Edition offers top-notch CPU performance, very competitive gaming performance, and a solid value for the price. In that price range, we could find only a single GeForce RTX 3070 Laptop-based gaming laptop–the vast majority used GeForce RTX 3060 or Nvidia’s last-generation GPUs. Most of those gaming laptops are also built around Intel’s older 10th-gen or even 9th-gen CPUs, which are massively outclassed by the Ryzen 9 5900HX inside of the ROG Strix G15 Advantage Edition.

You’re basically getting the one of the fastest laptop CPUs available, with a GPU that can run with Nvidia’s best in conventional gaming, all for an affordable price. It’s simply the best deal in town right now.