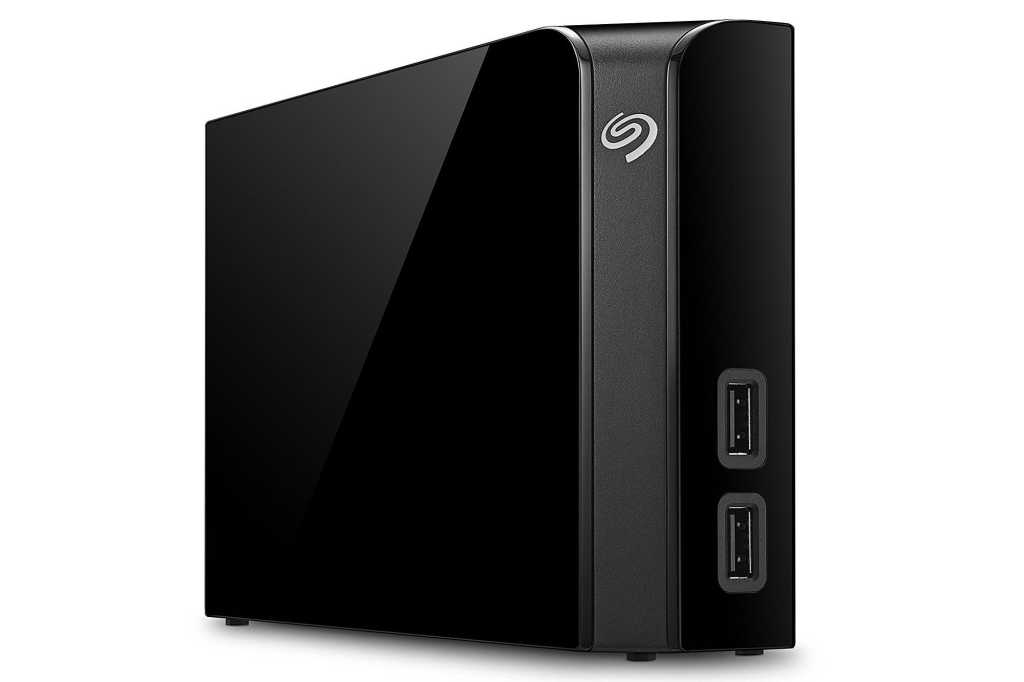 The Seagate Backup Plus Hub delivers a big bang for buck. Performance is very good for a USB hard drive, and you’d be hard put to find this kind of capacity elsewhere.

So why on earth, in this day of uber-fast portable SSDs and fast-enough, readily portable 2.5-inch hard drives, would anyone want to purchase a 3.5-inch external hard drive such as Seagate’s Backup Plus Hub? You sacrifice some portability, but the upsides are significant: nearly three times the capacity and faster sustained throughput than 2.5-inch models.

Seagate’s Backup Plus Hub comes in flavors from 4TB to 14TB. The 8TB version I tested is currently about $217 on Amazon. By comparison, portable 2.5-inch hard drives, while equally affordable, are currently limited to 5TB. Portable SSDs max out at 8TB, but only if you’re willing to shell out a cool $2000. Ouch!

This review is part of our ongoing roundup. of the best extemal drives. Go there for information on competing products and how we tested them.

Sporting a 3.5-inch hard drive and an AC adapter, the Backup Plus Hub is hefty, weighing about three pounds and measuring around 4.75 by 7.75 by 1.5 inches.  No, it’s not going to fit in your pocket. Backpack, yes, briefcase, maybe.

The reason this particular Backup Plus model includes ‘Hub’ in its moniker is that it sports fully functional dual USB Type-A ports on the front. Seagate rightly figures that if you’re going to have something large on your desk that requires a power cord, you might as well put the extra juice to work.

When I first opened the box, I was half-expecting charge-only functionality, but you can plug in anything you want to the USB port, including additional storage devices. Nice. On the back of the enclosure are the AC adapter jack and a Micro-B USB port. A Type-A to Micro-B cable is included.

It wouldn’t be a Backup Plus if it didn’t include Seagate’s own Toolkit utility/backup software. Toolkit is attractive and competent, supports pure backup and folder syncing, and works on both PC and macOS. It will do the job if Windows File Backup or macOS Time Machine aren’t of interest to you. Note that the drive comes preformatted with NTFS—you’ll want to change that to exFAT if you’re a Mac user.

The warranty on the Backup Plus Hub is a good two years. That’s better than the warranty for some of Seagate’s cheaper external hard drives, which are warrantied for only a single year. Others are three years.

If you don’t need the USB ports, you can get 16TB for the same $330 that the top Backup Plus Hub sports, with Seagate’s Expansion series. That series includes SSDs, 2.5-inch hard drives, and 3.5-inch high-capacity hard drives.

Given the limits of USB and hard drive technology, the Backup Plus Hub performed significantly faster than all of the 2.5-inch units we’ve tested. That’s not surprising given that we’ve seen several internal 3.5-inch hard drives top the 250MBps mark.

The 8TB Backup Plus Hub managed nearly 190MBps sustained reading and 150MBps sustained writing under CrystalDiskMark 7 32GB tests. The CDM 6 numbers, shown below, were a tad slower, but still indicative of the advantage that modern, denser 3.5-inch hard drives have over 2.5-inch hard drives. Note that performance will likely vary a bit with the larger and smaller capacities (a little faster or slower, respectively).

Being a hard drive, small file and seek performance (17 to 25 milliseconds) is slow–abysmal by SSD standards. That’s the nature of the beast.

In our real-world 48GB copies, the Backup Plus Hub proved equally dominant, shaving nearly six minutes total off the times of the 2.5-inch drives compared here.

Of course, the USB ports, being 5Gbps, are capable of much faster transfers. I benchmarked a Crucial X6 using the Backup Plus Hub’s ports and saw just over 400MBps writing and 450MBps reading. The X6 is capable of twice that with 10Gbps USB, but 400-450MBps is easily fast enough for small everyday SSD transfers.

Note: Hard drives fail, so you should never use a solo drive as the sole repository for your irreplaceable stuff. Use single hard drives for backup, scratch space, or for storing easily replaceable data–anything that can be downloaded again or easily recreated. Doubling them up in RAID or rotating them are also options.

In total, the Backup Plus Hub is fine for backup, and great for storing large files as well as streaming movies. Just don’t try to run an operating system off of it, and you’ll be fine. Then again, we all did just that back in the day, and some still do.

Though Seagate’s Expansion series is a bit cheaper, I found the Backup Plus Hub’s USB ports super-handy. With either product, you get a lot of storage for your dollar, and at least with the Hub, better performance than with 2.5-inch drives. What you lose, obviously, is a bit of portability.

Seagate informed me midway through the review that there will be an updated version of the Backup Plus Hub in a couple of months. We’ll revisit then.