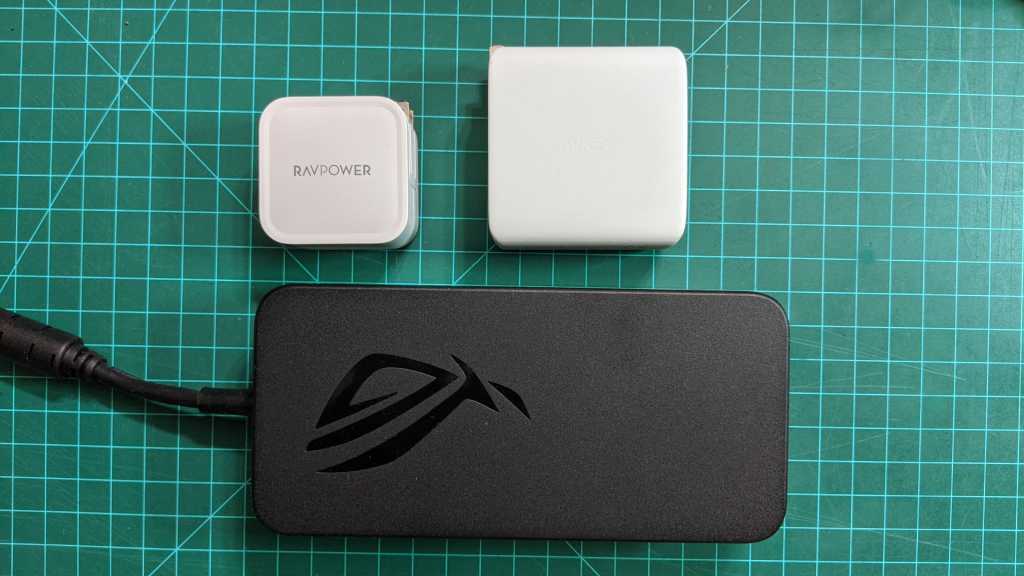 Beware of gaming laptop makers pushing USB-C chargers. While these smaller Gallium Nitride (GaN) units are called alternatives to the honking-big power bricks such laptops usually come with, you’re giving up a lot with the switch.

To find out just how much performance you leave behind, PCWorld decided to test a gaming laptop with two popular GaN charger rates you’ll run into—60 watts and 100 watts.

What is a Gallium Nitride charger?

GaN chargers are built using Gallium Nitride, which is far more efficient than conventional silicon-based chargers, allowing manufacturers to greatly reduce the size and weight of the units. It was initially an expensive and rare technology, but it’s become far more affordable recently.

Almost all of the GaN aftermarket chargers out today use the familiar USB-C port and USB-Power Delivery (PD) charge rates. Currently, USB-PD tops out at 100 watts, but a new spec will take it to 240 watts in the near future. Right now though, any legit gaming laptop will run off of the familiar barrel, or round, DC input plug as all real gaming laptops require far more than the 100 watts current USB-C chargers can provide.

Many gaming laptops, however, also offer the ability to charge from the USB-C port. The idea is you can charge from USB-C should you forget your regular charger or decide to shed weight when going on the road. But there is a trade-off.

The platform we settled on for testing is the outstanding Asus ROG Strix G15 Advantage Edition.  This 5.1-pound laptop sports an all-AMD configuration, with an 8-core Ryzen 9 5900HX, Radeon RX 6800M GPU, and a 15.6-inch 300Hz panel. One look at the laptop’s comically huge (7 x 3.25 x 1.5 inches), 280-watt power brick, however, and you can understand why Asus tells you, “For everyday activities like web browsing and streaming video, you can work off a smaller USB-C adapter up to 100W and travel even lighter with a single charger for your laptop and phone.”

For USB-C chargers, we used a 61-watt RavPower Charger single-port USB-C charger that you can buy directly from RavPower’s website. Our second USB-C power brick is an Aukey Omnia Mix4 (PA-B7), a 100-watt charger. Neither of the chargers comes with a USB-C high-wattage rated cable, a situation which itself is fraught with pain.

We tested with the authentic Apple 6-foot USB-C cable that comes with its MacBook Pro 15 laptops. For our testing, we simply recorded the performance scores of the ROG Strix G15 Advantage Edition under three tasks:

We tested the stock 280-watt Asus power brick, as well as the 100-watt and 61-watt USB-C chargers, and also threw in the score of the laptop running on battery. Note that when running on battery or on either of the USB-C power bricks, the ROG Strix G15 would lock us out of the “Turbo” performance profile. To try to even the scales, we tested the laptop with the 280-watt stock charger on its performance profile.

The good news: For CPU-constrained tests such as web browsing, the performance is essentially unchanged regardless of how you power the laptop. Even the CPU-intensive Cinebench R20 moves the needle a scant 3 percent going from the stock charger to a USB-C charger.

Where performance falls off the cliff and into a river is when you crank up the GPU. For example, you can see the huge disparity in performance in  3DMark Time Spy Graphics. The laptop basically sees a 47-percent performance drop by going from the stock 280-watt charger to the 100- or 61-watt chargers.

The other thing you need to think about is the ability to use the laptop and charge it at the same time. Laptop chargers are often sized to let you do both at the same time. By leaving the OEM charger behind, you break that design.

In the chart below, you can see the charge rate of the battery while running the same workloads above: WebXPRT 3 for a light duty load, Cinebench R20 for a CPU-heavy load, and 3DMark Time Spy Extreme for a GPU-heavy load.

Moving to the 100-watt charger, both the light CPU and CPU-heavy tasks would slowly charge the battery. The GPU-heavy tasks—even with the performance hit from above—would barely maintain the charge on the battery.

The 61-watt USB-C charger would basically discharge the battery no matter the task. Even light-duty browsing would eat into battery life. If you consider the tiny 61-watt chargers—or even smaller—you should expect to do nothing, or charge the laptop with it off or on standby.

All this adds up to degradation in graphics performance on USB-C, along with the joy of watching the battery drain during use. If that all sounds like a deal-breaker for you we can understand.

One thing we want to make clear is the biggest advantages of tiny GaN chargers. Obviously losing the bulk matters, but the other factor is weight. For comparison, here’s the weight of the stock charger—without the wall cord attached—compared to the 100-watt Aukey and the 61-watt RAV Power. For reference, we also threw in the weight of a can of Diet Coke.

The chart shows the weight in grams. That 454 grams weighs about 1 pound. The stock Asus 280 brick pushes almost 2 pounds, more if you include the wall cable.

So yes, if you could take almost 2 pounds off your shoulder while waiting in line for an hour at the airport—we understand. Just know that you are giving up a ton of gaming performance by making that choice, as well as the ability to use your laptop and charge the battery quickly at the same time.

We’d also point out that paying the premium for a fast gaming laptop, and then basically not getting that gaming performance while on the move—the very reason you bought  a gaming laptop—may not make much sense either.