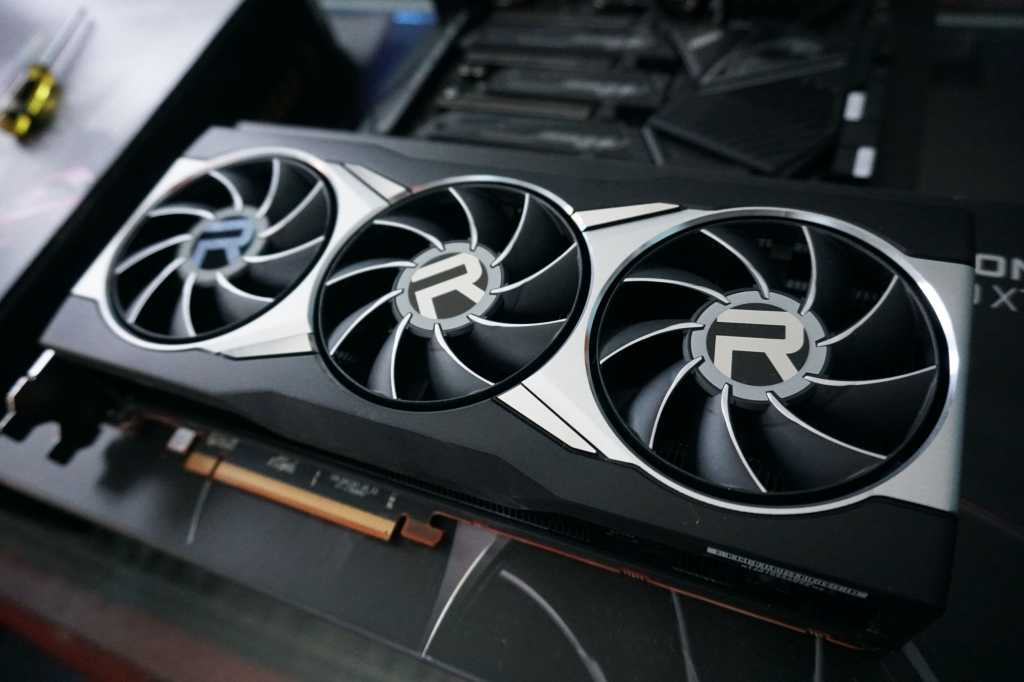 It’s finally here. As promised (and after months of teasers), AMD is unleashing FidelityFX Super Resolution upon the world on Tuesday, promising substantial frame rate boosts in PC games that support the image upscaling technology. AMD’s answer to Nvidia’s killer DLSS differs from the GeForce feature in some crucial ways, however, and that’s driven home by how FidelityFX Super Resolution is hitting the streets.

Zero games supported DLSS when Nvidia kicked off the RTX 20-series generation in September 2018. In contrast, FidelityFX Super Resolution is launching with not one, not two, but seven compatible games today, with many more slated to launch by the end of the year. Also, DLSS remains limited to pricey RTX-branded GeForce cards with dedicated tensor cores inside. Super Resolution leverages traditional shader cores to work its magic. Any games that support FSR should just work on a wide swathe of GPUs—no graphics card driver updates required.

Yes, that means that FidelityFX Super Resolution should speed up Radeon and GeForce GPUs alike, and if Nvidia drags its heels supporting the open-source technology as it did with FreeSync monitors, it shouldn’t matter. FSR is like a “no purchase necessary instant graphics card upgrade,” AMD chief gaming architect Frank Azor told me in a briefing.

AMD took several years to release its DLSS rival, but now that Super Resolution is here, Radeon wants it to become “the industry’s [image] upscaler,” as Azor puts it. Let’s dig into what you need to know about AMD Radeon’s FidelityFX Super Resolution.

How does FidelityFX Super Resolution work?

This gets a little technical, so feel free to use the table of contents at left to jump to FSR game and graphics card support if you’d rather skip ahead.

At its core, FidelityFX Super Resolution works the same as all image upscaling technologies. FSR lets a graphics card internally render games at a lower resolution, then performs software tricks to upscale that image to the higher chosen resolution of your monitor.

Because your GPU is rendering a game at, say, 1440p resolution before upscaling it to the much more strenuous 4K resolution, you’ll see a big performance boost. AMD says Super Resolution can deliver up to 2.4X faster frame rates at 4K resolution than native resolution alone, for instance. FSR’s higher frame rates can make previously unplayable games playable on your GPU, and greatly increase the responsiveness of the games you’re playing.

FidelityFX Super Resolution offers four different quality presets: Ultra Quality, Quality, Balanced, and Performance. Stepping up each tier produces faster frame rates—a game running FSR will see much higher speeds on the Performance preset than Quality—but can also potentially make the visuals look less crisp, as the higher tiers achieve those speeds by rendering the game internally at progressively lower resolutions, as you can see in the chart above. An image upscaled from 1080p resolution to 4K (FSR Performance preset) has fewer pixels to take information from than when the game is rendered internally at 2954×1662 resolution (FSR Ultra Quality).

Even the Ultra Quality Mode should produce significantly faster frame rates, however, while delivering an image that AMD calls “very close to native rendering.” The AMD-supplied images below show a description of what to expect from each FSR preset, along with the corresponding boost in frame rates achieved when activating them in Godfall.

Impressive stuff on paper, though when it comes to image upscaling, all that matters is how your games actually look in motion onscreen. Nvidia’s first generation of DLSS was notoriously blurry, making some games look like there was Vaseline smeared on your screen. You don’t want that. (DLSS 2.0 is vastly improved and works like black magic.)

On the other hand, don’t simply go off still images to gauge the feel of FidelityFX Super Resolution, either. Slight blurriness that seems apparent in zoomed-in stills aren’t always visible to the human eye when a game is in motion. AMD also offers a killer feature called Radeon Boost that uses a mixture of resolution downscaling and Variable Rate Shading to reduce image horsepower needs when you’re moving quickly in supported games, increasing the frame rate. It’s virtually indiscernible from native rendering in practice, though you can see it in screenshots. Watch (or better yet, play around with) FidelityFX Super Resolution for yourself before jumping to conclusions.

While Nvidia DLSS and Epic’s upcoming Temporal Super Resolution feature in Unreal Engine 5 are based on temporal upscaling—which use motion vectors from the game to help upscale visuals—FidelityFX Super Resolution deploys spatial upscaling instead. Azor said AMD has nothing against temporal upscaling (and we might even see it come to FSR in some way in the future as the company plans to make rapid improvements), but using spatial upscaling on traditional GPU shaders makes it dead-simple for game developers to integrate Super Resolution—a key focus for AMD in its quest to deliver “the industry’s upscaler.” (AMD will post FSR’s source code to its GPU Open initiative by mid-July.)

FidelityFX Super Resolution uses two separate passes for its image upscaling, AMD game engineering director Nicolas Thibieroz told me. The first pass upscales the image from the lower internal render resolution, while the second pass recreates high-quality edges from the source image and performs image sharpening to tidy up the rest of the picture, reducing the softer visuals inherent to image upscaling.

The input image needs to be anti-aliased for best results, Thibieroz said. So developers will need to integrate FSR after that step as well as tone-mapping. That said, any visual effects that add “noise” to the image—like Chromatic Aberration or Film Grain—happens after FSR’s upscaling and sharpening passes, to avoid having those optional extras affect the quality of Super Resolution’s techno-wizardry. Display elements like health bars and ammo counters get added last so they appear at full resolution.

Part of the reason we need technologies like FidelityFX Super Resolution is to blunt the hefty performance impact created by enabling real-time ray tracing effects, which AMD added support for in its Radeon RX 6000-series graphics cards. Nvidia’s RTX GPUs push both upscaling and ray tracing denoising over to the dedicated tensor cores. Because AMD’s technologies perform all that work (as well as, you know, actually rendering the game) on standard GPU shaders, I asked Thibieroz if FSR’s effectiveness would be reduced with ray tracing active. Nope. Thibieroz also doesn’t expect the radical Infinity Cache in AMD’s RDNA 2-based GPUs to increase performance of Super Resolution, though he noted that FSR’s second sharpening pass is more memory-intensive, so there may be some small benefit there in certain scenarios. AMD hasn’t measured it, though.

Phew! Enough tech talk. Let’s get onto the lowdown for gamers.

None of those day-one releases are blockbusters (though we love Evil Genius 2) but there are indeed blockbusters on the way, with megahits like Resident Evil Village, Myst, Far Cry 6, Dota 2, and the Baldur’s Gate reboot “coming soon.”

The future looks even more promising. Azor and Thibieroz say AMD has been “completely overwhelmed” by developer support for FidelityFX Super Resolution,. To drive that point home, the company announced that dozens of studios and engines have already signed up to support FSR, even if they aren’t ready to announce FSR integration in new or existing games today. The list is full of industry heavyweights like Valve, Epic’s Unreal Engine, Unity, Electronic Arts’s Frostbite engine, Warner Bros, Ubisoft, Capcom, Crystal Dynamics, Gearbox and Koch Media, along with beloved PC studios like Larian, Cyan, Obsidian, Bloober Team, and many more.

As with FSR’s image quality, the proof will be in the pudding when it comes to developer support. Of the 25 games that announced DLSS support at Nvidia’s RTX 20-series launch, only eight actually wound up integrating it by the time the RTX 30-series rolled out in 2020. That said, it’s a strong showing out of the gate for AMD.

Azor chalks it up to the easy integration and broad hardware support FidelityFX Super Resolution offers, which he says “democratize upscaling.” You don’t need to fuss with motion vectors or perform significant under-the-hood tweaks to add FSR like you do with DLSS, for example. And because Super Resolution works with so many existing graphics cards, developers who integrate it can potentially sell their games to PC owners with aging hardware that can’t be replaced easily during the crippling GPU shortage. It’s a pretty enticing package for developers if it’s indeed all as seamless behind the scenes as AMD claims.

How much faster does FidelityFX Super Resolution make games?

We haven’t yet tested FSR for ourselves, but the company provided several charts showing FSR performance across a range of scenarios, including Radeon RX 6800M mobile GPUs and older AMD and Nvidia cards.

Note that FSR’s performance uplift is reduced quite a bit on those older GPUs compared to the newer Radeon RX 6000-series hardware. Azor says that’s why AMD cut soff upport off at the Radeon RX 400-series. Older graphics cards and even some lower-end GPUs simply don’t have enough horsepower to get much of a performance benefit from Super Resolution, as its magic all occurs on the same shaders as traditional rendering. Modern graphics cards handle it just fine, though.

While Nvidia’s DLSS technology remains limited to high-priced RTX-branded graphics cards with dedicated tensor core hardware, the shader-based upscaling of FidelityFX Super Resolution means it can work on a very wide swath of GPUs out of the gate.

Everything from the Radeon RX 400-series on up works with FSR on AMD’s side, including Ryzen 2000-series and newer APUs that contain integrated Radeon graphics. Super Resolution will also work on Nvidia’s GeForce GTX 10- and 16-series GPUs, as well as RTX 20- and 30-series graphics cards. Again, because FidelityFX Super Resolution is implemented by game developers and runs on traditional shaders, you can activate it in supported games even if Nvidia declines to optimize for the technology in its drivers. That sound you hear is one of relief from the hordes of PC gamers who waited for years while Nvidia dragged its feet before supporting FreeSync monitors.

In time, AMD hopes FidelityFX Super Resolution’s reach extends even further. Both Intel and Microsoft have already expressed interest in the soon-to-be-open technology. Azor says it’s very easy for platforms (such as game consoles) to enable FSR as well due to the way it’s constructed, and AMD’s APUs power both the Xbox Series S|X as well as the PlayStation 5. Azor also stressed that it’s simple to enable FSR on non-AMD platforms, as evidenced by the inherent GeForce support. (FSR on Switch when?)

So while FidelityFX Super Resolution may “only” be launching on the PC today, and “only” in seven games, AMD worked hard to ensure all the cornerstones are in place to potentially propel its open new technology into a bigger role across the entire gaming world going forward. We still need to see if FSR manages to hang with Nvidia’s scarily good DLSS 2.0 in terms of both fidelity and performance, but even if it just winds up being good enough, Radeon could very well succeed in its quest to “democratize upscaling” and have Super Resolution become a new de facto industry standard—just like it did with FreeSync monitors. Giddy up.