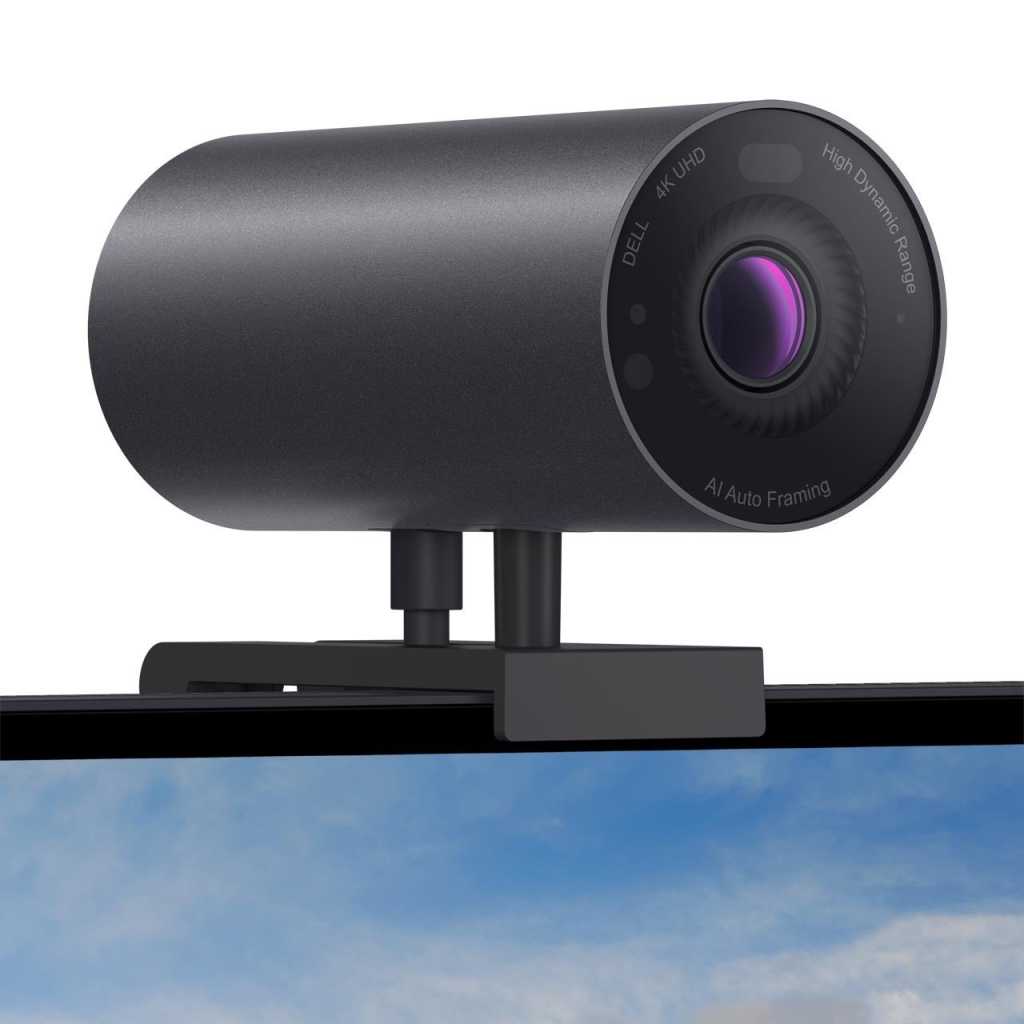 Dell launched its first 4K UltraSharp webcam on Tuesday, complete with Windows Hello,  AI auto-framing to track your face, and an adjustable field of view and frame rate. On paper, it looks like everything you could want in a premium webcam.

While most integrated laptop webcams offer 720p resolution, more and more standalone, affordable webcams are being designed around 1080p. Dell’s UltraSharp WB7022 is unusual in that it’s one of a small but growing number of 4K webcams designed either for streaming video or for those who simply desire to look one’s best in a videoconferencing call.

Likewise, just a very small number of standalone webcams support Windows Hello, which requires a depth camera in addition to an optical sensor (the 8.3MP Sony STARVIS sensor, in this case). Dell’s UltraSharp WB7022 does, which puts it in a very special niche.

Physically, Dell’s WB7022 is a long, cylindrical webcam (90 mm, or about 3.5 inches) made of anodized aluminum. It can be mounted either on the back of a display or on a tripod. Dell supplies both mounts as part of the WB7022 package. The webcam mounts via a magnetic connection between the camera and mount. You can connect it to your PC via the included 2-meter USB-C to USB-A cable.

Dell does provide a privacy shutter, though one that’s a bit unusual: It’s an actual cap, which magnetically attaches to the end of the webcam and blocks the lens. A small, white LED otherwise indicates when the webcam is being used.

Once mounted, Dell’s Peripheral Manager utility controls the webcam, and its tons of features: HDR, auto-focusing, digital zoom (up to 5X), framing, brightness, saturation, and more. Unusually, the WB7022 is neither fixed-focus, nor does it offer a fixed field of view (FOV). Dell’s AI framing crops the image to keep your face centered, and you have the option of configuring the field of view from 90 degrees, 78 degrees, and down to a narrow 65 degrees. Dell applies HDR, temporal, and spatial noise reduction to help you look your best.

There are a few catches, of a sort. First. Dell’s WB7022 webcam does not include a mic, in part because laptop mics have improved so dramatically over the years. Dell’s WB7022 records in up to 60 frames per second—most webcams record in 30 frames per second. In the WB7022’s case, the webcam records in 60 fps only at 1080p resolutions; in 4K, it can record only at 30 fps. There’s no integrated ring light, either.

Of course, Dell charges far more for the WB7022 than you’d pay for a standalone 1080p webcam, but the webcam offers many more features. That’s an intriguing combination in our book.