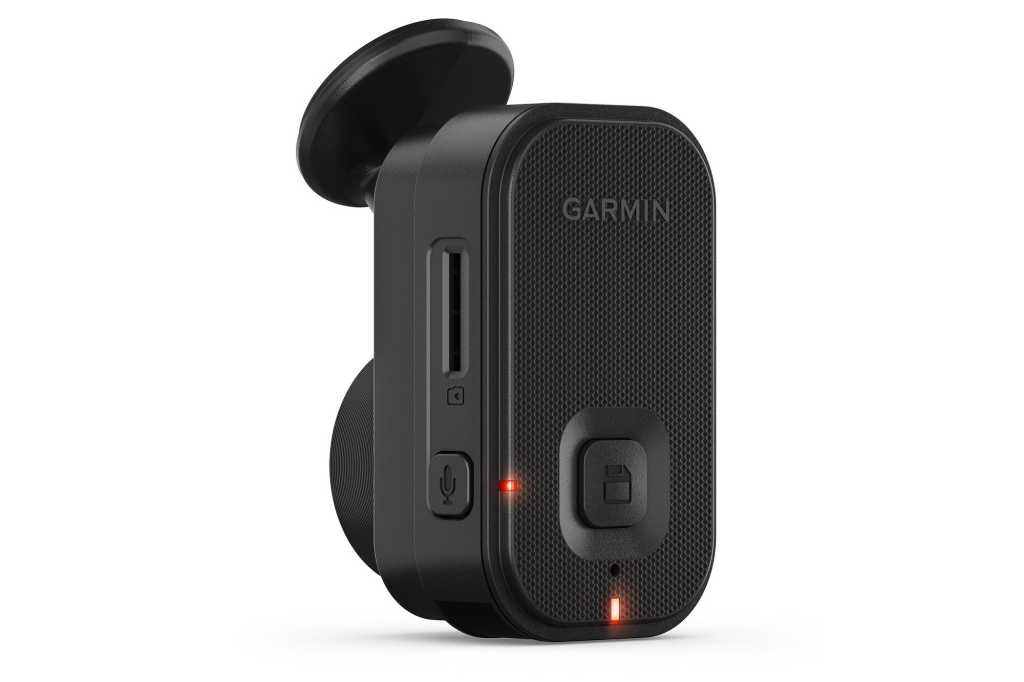 If your idea of a dash cam is easy-to-use and hidden well out of the way, there’s no better product out there than Garmin’s diminutive Dash Cam Mini 2. The captures aren’t quite as good as those of its larger siblings, but they’re still very good. Voice control and cloud storage are plusses, but there’s no GPS.

If you like your dash cams small and unobtrusive, easy to use, with good day and night captures, then Garmin’s tiny, $130 Dash Cam Mini 2 is what you want. It’s so miniscule, it was completely hidden behind my MX-5 Miata’s dwarfish rearview mirror. That’s small.

When we say small, we mean the Dash Cam Mini 2 measures a mere 1.23 inches wide by 2.1 inches tall by 1.5 inches deep, including the lens body, and it weighs in at around an ounce. Garmin calls it car-key-sized, but it’s walnut-sized in my book. Seriously, without mini-USB cable attached, it’s easy to lose track of this tiny bit of tech in your backpack. I did—twice. Then I started leaving the cable attached.

Said USB cable marries to the right side of the camera, while the left is home to the micro SD card slot and the audio mute button. Pressing the latter will also format a blank memory card (8GB or greater). Another button on the back saves a snapshot and video, and when long-pressed, pairs the Mini 2 to your phone for access by the Garmin Drive app.

The camera is capable of 1080p at 30 frames per second. It sports a wide 140-degree field of view. The only thing it doesn’t fit into its tiny frame is GPS, which is disappointing though understandable given the size.

The Dash Cam Mini 2 opts for a supercapacitor, likely because there isn’t enough room for the lithium-ion battery found in Garmin’s larger dash cams. However, the supercapacitor is hefty enough to keep the Mini 2 running for a good two to three seconds after you pull the plug. Indeed, while testing (and before reading the specs) I was under the impression that there was a battery.

Voice control allows you to save a video, take a picture, and turn audio recording on and off. Other notable features include temporary cloud storage (up to 30 days) through Garmin’s Vault portal, Live View with the aforementioned Drive app, and Parking Guard. The latter two features require a constant power source. I recommend an OBD-II cable.

Installing any dash cam involves largely the same steps, though with different mounts and positioning. I was a little disappointed that the Mini 2 doesn’t use the same magnetic disk and mount that Garmin’s other dash cams employ. Instead, it uses a semi-permanent adhesive disk of the same size. I actually stuck it to the mounting disk from the recently reviewed Dash Cam 57.

You can pop the Mini 2 off of the mounting arm at the ball-joint coupling (on the camera), but it doesn’t part ways as easily as the magnetic alternative and is likely to break from stress sooner. Because the Mini 2 is so small and hard to spot, you may be able to leave it in the car with less risk of theft.

After reviewing Garmin’s Dash Cam 57, I must admit that I grew used to the 1440p captures. The Dash Cam Mini 2 is limited to 1080p, so there is a drop in detail. The video is still very good, and perfectly usable legally, but if you’re looking for top-notch, get the Dash Cam 57.

As you can see below, the 140-degree lens captures a rather large swath of road, but it also catches a lot of windshield glare on a sunny day. Color is top-notch and accurate. Details are nicely processed and readily visible.

Night captures are quite good—actually a bit better than what you’ll see below. It was impossible to keep moisture off of my windshield the night I took the captures. That’s what happens with the marine layer here in San Francisco.

The areas surrounding the vehicle to the sides show as much detail as the view forward in the night capture above. Headlight flare was minimal.

The Garmin Dash Cam Mini 2 takes good video both day and night, and is by far the smallest, most unobtrusive dash cam available. There’s no GPS, but the set-it-and-forget-it’s-there Mini 2 is still one of my favorites. A great dash cam at an affordable price point.