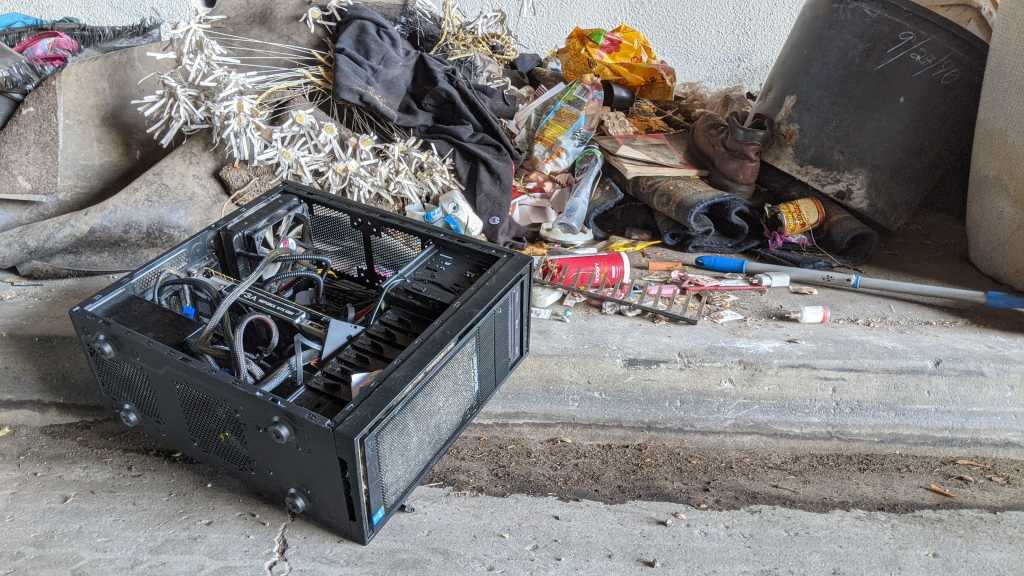 We indeed live with first-world problems in the United States. I know this because amid a global chip shortage and a 1,000-year drought of GPUs, I stumbled across a fully functional gaming PC literally thrown to the gutter.

Nerd’s honor (which you properly say with a Vulcan salute)!

For real: I am not lying. The previous owner didn’t just abandon it haphazardly, but where I live, the city offers bulk disposal days where you can toss out appliances, mattresses, and yes—even your gaming PCs.

As you can see, it looks like it was tied to a truck bumper and dragged to hell and back. Its fans were clogged with dust, one memory heat spreader had fallen off, and the cap that would normally cover the liquid cooler had somehow vanished. One case fan had a wire rubbing against it, so the solution was apparently to fold up a piece of paper and jam the fan blade rather than listen to the “tick-tick-tick” of the fan hitting the wire.

I, frankly, could understand why someone might decide it was time to jettison this mess during spring cleaning. But as a finalist for the hot new show, “PC Hardware Hoarders of Silicon Valley” (I actually live north of Silicon Valley, and no, there’s no such show—but there should be!), I can never let go of old hardware. Not because I need it, but because I find beauty in the ugliness. Yes, the machine you see here looks sketchy, but in my mind—someone, somewhere—can use it. I know I can find a home for an old monitor at the public library, or a person happy to take an ancient PC. It’s better for someone to get some use out of it then to have it go to the great e-waste firepit in the sky.

I do wonder what its history was. Did it get replaced by a shiny, fast new Ryzen 5000 paired with a GeForce RTX 3080? Did the owner quit PC gaming, or buy a new-generation console? Incidentally, the home I found for this PC is with a relative who has long been a console gamer but really wants—and can’t afford—a gaming PC.

The rest of the parts I found, I haven’t found a home for yet, but I will. Yes, it wasn’t just this functional Core i7-5930K and GeForce GTX 1080 that was headed for the trash heap.

Besides the old analog PC speakers and a PS/2 keyboard, I also found a functional 9th-gen Core i5-9600K with 16GB of RAM. The motherboard was just lying on the ground and was missing its fan, so I suspect someone had already come across it in a case and decided to leave it behind, keeping whatever components that were somehow better instead. As with the gaming PC, the motherboard, CPU, and RAM function just fine, as you can see from BIOS shot below.

Not Ryzen, not for me

Even I have my limits. There was actually a third PC in a case stripped out by another passerby: an older AM3-socket based AMD CPU. I didn’t remove the cooler to find the model number, but pre-Ryzen CPUs don’t rank high in my book anymore. I have enough older Sandy Bridge and Ivy Bridge machines I’m still trying to rehome.

I could see the sanitation engineers driving my way, so I scuttled back home with the PC and motherboard while dragging my confused dog. Hopefully, someone else found utility for that old AM3 chip.

This is why Windows 11 makes me sad

My story of turning e-waste into useful hardware is a good bar story, but it also highlights why people are so very enraged over Windows 11’s plan to strand older hardware. Yes, there may indeed be legitimate needs with the increased security threats, but that doesn’t lessen the sting. For as long as I can remember, old PC hardware has persisted with the ability to run the newest, most secure OS.

Come 2025 when Windows 10 ends, I’m afraid I’ll just have to leave any old hardware to the e-waste gods instead (sorry Linux fans, it’s just really hard to find regular consumers who will take an old PC without the most popular consumer OS on it).

For now, I can at least appreciate that I found homes for this hardware.