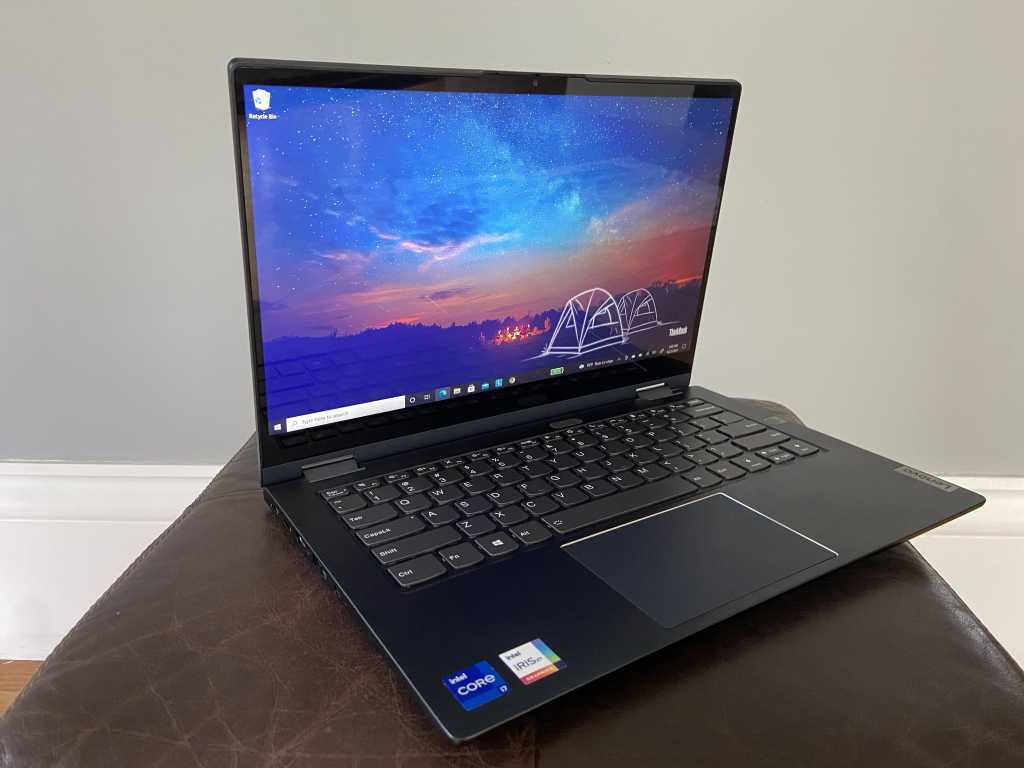 Matt Elliott/IDG
At a Glance

The Lenovo ThinkBook 14s Yoga is a budget business machine that delivers in design and features, but falls a bit short on display quality and battery life.

The Lenovo ThinkBook 14s Yoga is a capable 2-in-1 convertible that could be a great fallback option if your budget manager rejects your request for a ThinkPad X1 Yoga or another premium 2-in-1 business convertible. It keeps the spirit of the product line with its sturdy chassis and comfortable keyboard. Productivity performance is strong.

The tradeoffs for the lower price are a mediocre display and battery life. As long as your job doesn’t involve field work or prolonged stretches off AC, budget-conscious business users will still find value here.

Based on its specifications, the Lenovo ThinkBook 14s Yoga model we reviewed (20WE001DUS) has a middle-of-the-road configuration that doesn’t skimp on important things like memory, storage, or connectivity. Here are the details:

Unfortunately laptops are selling quickly these days, and the exact configuration we tested wasn’t available by presstime. Our product button will lead you to the configurations currently available, including an otherwise identical model with 8GB of RAM instead of 16GB, for $993.85 after an always-shifting eCoupon. At the top end of the line is a model at $1,260.35 that expands the RAM to 24GB and the solid-state storage to 1TB. All models feature the same full HD 14-inch touchscreen display rated for 300 nits of brightness and include a pen with a convenient garage within the laptop chassis.

A vision in blue

Lenovo offers two color options—Mineral Grey or Abyss Blue—for the ThinkBook 14s Yoga; our test system features the latter. The blue is a deep hue and looks buttoned-up enough for corporate settings. In fact, under most lighting conditions, it appears to be standard corporate black. 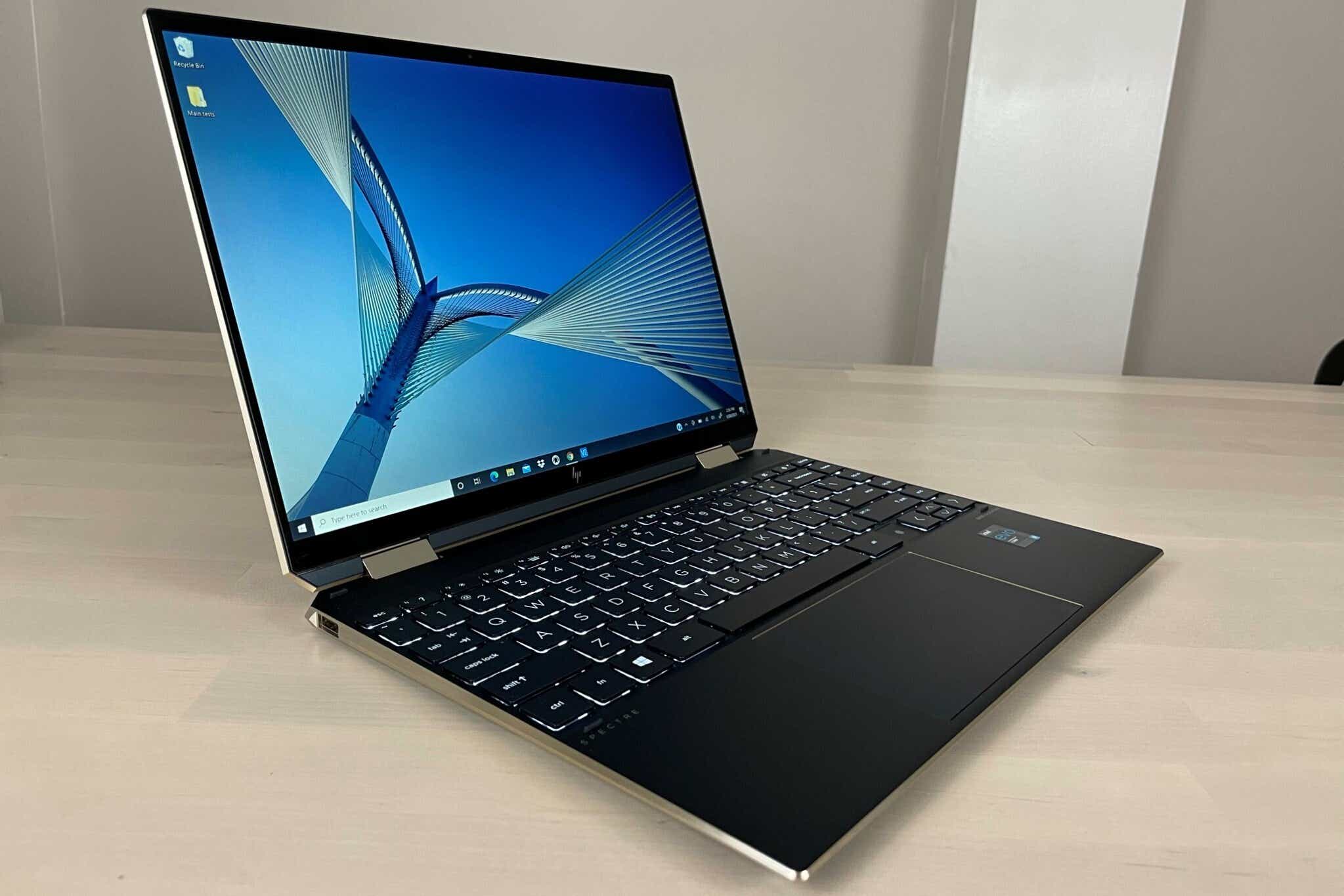 The ThinkBook 14s Yoga lacks the bling found on the HP Spectre x360 14—CNC-machining, gem-cut edges, and gold, logo-stamped hinges—but the ThinkBook 14s Yoga delivers the winning combination of feeling both durable and light. On some budget models, an all-plastic enclosure might flex in your grip, or yield beneath your fingertips when typing. The all-metal chassis on the ThinkBook 14s Yoga lends a touch of luxury, as well as a rigid feel that should stand up to the demands and dings of business travel. 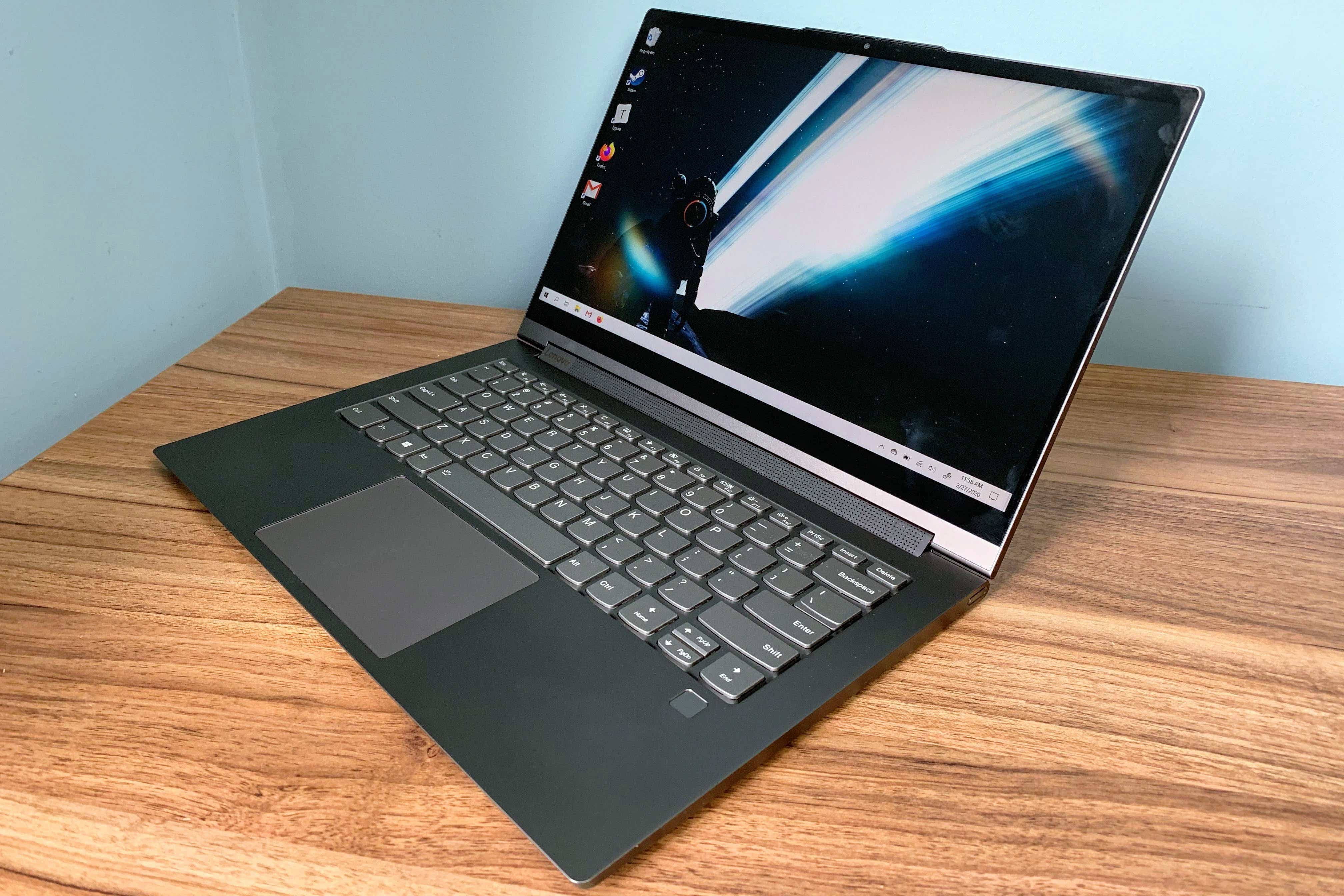 The ThinkBook 14s Yoga weighs 3.3 pounds, which is average for its 14-inch size class. Part of the reason the ThinkBook 14s Yoga can’t limbo under the 3-pound mark (like the HP Spectre x360 14 and Lenovo’s own Yoga C940 14 do) is its touchscreen, which always adds weight, especially when protected by Gorilla Glass.

The ThinkBook 14s Yoga’s gray keys would likely look better contrasting against the Mineral Gray chassis than the Abyss Blue we had (a standard black keyboard would have been a better choice aesthetically). Color aside, the keys feel snappy and are quiet when pressed, even for a thunderous typist like this reviewer. They offer deeper travel than I expected for such a thin laptop—a pleasant surprise—yet they are far from mushy, offering a similar feel to the excellent keyboards typically found on Lenovo’s ThinkPads. The biggest difference is the ThinkBook’s keys are flat, instead of the slightly concave shape of a pricier ThinkPad’s.

The trackpad is a bit on the small side by today’s standards, measuring 4.1 by 2.8 inches. Given the narrow wrist rest below the keyboard, Lenovo had scant room to work with. Its matte finish makes for smooth gliding, and it accurately recorded my taps, swipes, and gestures.

The full HD touch display is protected by a layer of Gorilla Glass and surrounded on all four sides by thin bezels. The glossy finish of the Gorilla Glass can cause some distracting glare and reflections, which is exacerbated by the display’s dimness. Rated for 300 nits of brightness, the ThinkBook 14s Yoga’s display can’t match the peak brightness of the 400-nit display of Lenovo’s Yoga C940 14 or the 500-nit display of the Dell XPS 13 2-in-1. It sufficed under artificial light, but I had the brightness level maxed out under all situations and scenarios. If your job regularly takes you in the field or you typically work in a sun-drenched workspace, then I would recommend spending a bit more for a brighter display.

The touch panel felt accurate and responsive. I was immediately comfortable writing and drawing on the display with the included pen. With the display rotated into tablet mode, the keyboard felt warm, which detracts from the ThinkBook 14’s Yoga tablet functionality.

The system’s compact chassis makes dissipating heat a challenge. The internal fan is very quiet, so fan noise isn’t an issue, but perhaps it needs to spin at a greater rate to keep the system cooler.

The speakers fire from the front of each side edge, which is preferable to speakers that fire downward from the bottom panel. However, the overall sound is no better than that of your average laptop. The audio output can reach a level to fill a small room but lacks anything resembling a bass response. The tinny sound means you’ll reach for your headphones for music playback, but it’s clear enough for Zoom calls.

A 720p webcam sits above the display and exhibited accurate colors, but the overall image was fairly noisy. A physical privacy cover gives you peace of mind when you aren’t using the camera, which is an appreciated feature for anyone and a requisite for business users.

The ThinkBook 14s Yoga’s port selection comes with both types of USB ports and support for Thunderbolt 4, the latest and fastest standard for connecting to external drives and displays. Most of the ports are located on the system’s left edge, where you’ll find two USB-C ports—one that features USB 3.2 connectivity and the other with Thunderbolt 4. (If you’re confused about all the different kinds of USB’s, this handy chart explains all the USB specs and how they relate to Thunderbolt.) Also on the left edge are a USB-A port, an HDMI 1.4 port, and a headphone jack.

The biggest omission is an ethernet jack, which means you’ll need to carry around a USB-C hub (or Thunderbolt dock) or use a docking station for a wired network connection.

The ThinkBook 14s Yoga is a good worker bee with midrange or better performance, faltering only in battery life.

We compared it against the Dell XPS 13 2-in-1 and HP Spectre x360 14, each of which features the same Core i7 CPU. The Lenovo Yoga C940 features a 10th-gen Core i7 CPU. We also included a pair of traditional clamshell laptops with 11th-gen CPUs: The Acer Swift 3X features the same Core i7-1165G7 as the ThinkBook 14s Yoga, and the ThinkPad E14 Gen 2 features an 11th-gen Core i5-113G7. All of the systems feature integrated Intel Xe graphics and 16GB of memory except for the Yoga C940 14, which features Intel’s previous-generation Iris Plus graphics and 12GB of RAM.

Editor’s note: The ThinkBook 14s Yoga is misnamed “ThinkPad 14s Yoga” in all the charts. PCWorld regrets the error.

Our first benchmark is PCMark 10, which measures performance on everyday computing work including office productivity tasks, web browsing, and video chats. The ThinkBook 14s Yoga led the pack and was the only system other than the Acer Swift 3X to surpass the 5,000 mark. We consider anything in the 4,000 range to be acceptable, while anything above 5,000 is exceptional.

The ThinkBook 14s Yoga finished in the middle of the pack on our HandBrake test, which involves encoding a large 30GB video file. This test puts laptops under sustained, heavy loads, pushing the CPU and cooling system to their limits. The ThinkBook 14s Yoga’s thin chassis and discreet cooling probably held it back, as it likely had to throttle the CPU at points during the long encode to keep thermals in check.

Where HandBrake is a marathon, Cinebench is a sprint. This benchmark renders a complex 2D scene over a short period of time. The ThinkBook 14s Yoga’s sprint speed was no faster or slower than its marathon pace; it again finished in the middle of the pack. It led the way in single-core performance, although the scores were very tightly bunched save the Yoga C940 14’s.

Intel’s Iris Xe integrated graphics is surprisingly good, as our tests have shown, but that doesn’t mean the Iris Xe-equipped ThinkBook 14s Yoga is a gaming machine. It actually finished toward the back of the Iris Xe pack. Manage your expectations accordingly. (Unfortunately we can’t compare the ThinkBook 14s Yoga to the Yoga C940 14 with its previous-generation Iris Plus graphics, because we recently switched to 3DMark’s Time Spy graphics benchmark from the older Sky Diver benchmark on which the Yoga C940 was tested.)

We test laptop battery life by looping a 4K video using the stock Windows Movies & TV app, with screen brightness set to about 250 nits and the volume dialed to 50 percent, with headphones plugged in. The ThinkBook 14s Yoga ran out of juice well before competing systems, lasting just over seven hours on the test. You should experience longer battery life under less demanding scenarios than continually playing a video, but its result on our battery life test is still disappointing.

The Lenovo ThinkBook 14s Yoga is a versatile and stylish 2-in-1 that delivers build quality and performance on a par with pricier 2-in-1 convertibles. As with any budget or midrange machine, sacrifices were made to hit a more approachable price. In the case of the ThinkBook 14s Yoga, you lose in two big areas: display and battery. We have no other complaints about its performance, and we like the look and feel of its compact, all-metal chassis. Given its shortcomings, however, we can recommend the ThinkBook 14s Yoga only to workers on a tight budget who spend the majority of the time inside, under artificial light, and near a power outlet.