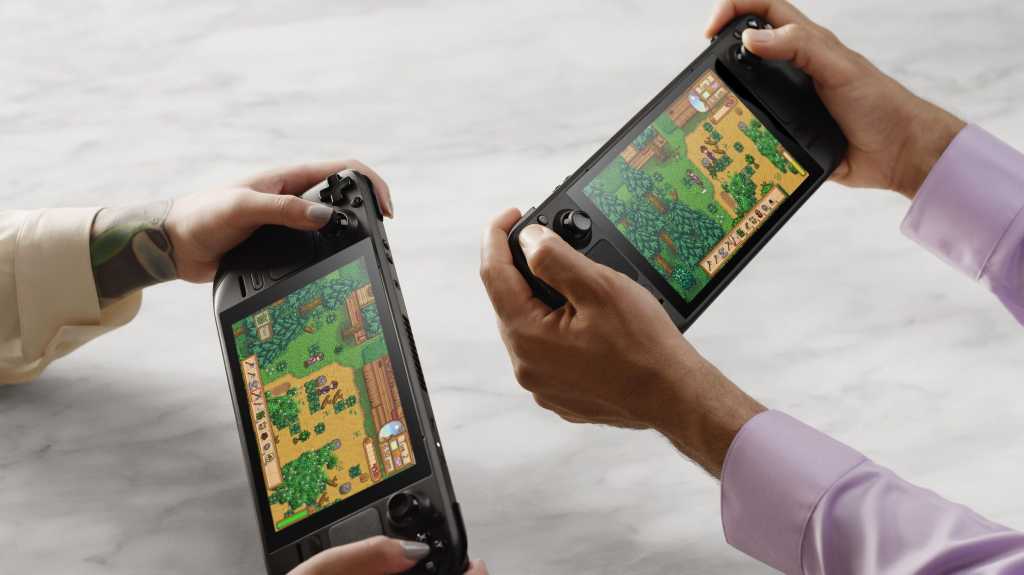 The rumors were true. Valve officially pulled the curtain back on the Steam Deck on Thursday—a $399 gaming handheld designed to bring your Steam gaming library to the palms of your hands, powered by AMD hardware and Valve’s own Linux-based SteamOS operating system. Preorders open July 16, with shipments starting in December.

The Steam Deck looks like the Nintendo Switch, if the Nintendo Switch was created by diehard PC enthusiasts. You’ll find a big 7-inch display front and center—the same size as the new OLED Switch—complete with touchscreen functionality. It’s not OLED, alas, but Valve says the display shines at a very respectable 400 nits (crucial for outdoor use) and runs at 60Hz, a.k.a. the PC gaming gold standard. By comparison, the Switch drops down to 30Hz when undocked, a refresh rate that simply wouldn’t fly for us PC snobs. The Steam Deck’s screen should also be a bit clearer than its Nintendo rival, with a 1280×800 resolution and an “Optically bonded LCD for enhanced readability.”

Other than that the Steam Deck looks, well, like a typical (yet slightly chonky) gaming handheld, with all the buttons, analog sticks, and D-pads you’d expect, including haptic feedback support so you can feel your games rumble.

The connectivity is where things start to take a turn for the PC-centric. The Steam Deck supports both Bluetooth and Wi-Fi, and it comes not only with a microSD card slot for expanded storage, but also a USB-C port that can be used to power the device, drive multi-channel audio via its DisplayPort-over-USB-C functionality, or connect to other hardware.

“Steam Deck is also an open PC, adding the ability to install any software or connect with any hardware,” Valve said in a note to journalists, while its website boasts that “You can connect to peripherals, throw the picture onto a big screen, and do all the other PC things you’d expect.”

The beating heart at the center of the Steam Deck is a custom AMD APU “optimized for handheld gaming.” It’s powered by a CPU with four Zen 2 (Ryzen 3000-series) cores and eight threads running at between 2.4GHz and 3.5GHz, paired with 8 Radeon GPU cores built upon AMD’s fantastic new RDNA 2 architecture, which is also found in the Radeon RX 6000-series graphics cards, the Xbox Series S|X, and the PlayStation 5.

Don’t expect to run ray-tracing on the Steam Deck—the marketing doesn’t mention the cutting-edge lighting effects anywhere—but Valve claims that it offers “more than enough performance to run the latest AAA games in a very efficient power envelope.” Given the modest screen resolution, which would be pitiful for a full-sized monitor but just fine in a tiny handheld like this, we’re inclined to believe the claim for most games, though you’ll no doubt need to tinker with graphics settings to get particularly strenuous games (like Cyberpunk 2077) running well on this. Valve showed off the Steam Deck running Jedi: Fallen Order and Control to drive the point home.

Even the storage options are worthy of PC gaming. Yes, the entry level $399 version comes with a tiny 64GB eMMC drive running over a PCIe Gen. 2 connection, similar to the Nintendo Switch. But you can also opt for $529 and $649 configurations that come with 256GB and 512GB NVMe SSDs, respectively, running on the same PCIe 3.0 connection most people have in their gaming PCs right now.

All in all, the Steam Deck looks damned impressive on paper, and that’s not even getting into the most important part—the games. Setup sounds like a breeze, just like when you buy Fire or Echo devices direct from Amazon. Simply turn on the Steam Deck, log into your Steam account, and your entire existing Steam library and friends list will be instantly available. Steam chats, notifications, cloud saves, the ability to stream games from your primary gaming desktop to the Steam Deck via remote play, it’s all there.

Most Steam games aren’t optimized for Linux, which SteamOS is built upon, but Valve’s been slowly enhancing into its Proton compatibility layer for years. Proton lets a shocking number of Windows-centric games run on Linux with no to minimal hassle. Developers don’t have to do any extra work for Proton to work its magic either—most of your games should just work.

Between Proton and SteamOS itself, Valve has quietly been laying the foundation for the Steam Deck for well over half a decade now. We can’t wait to get our hands on it in December. A Steam-centric gaming handheld sounds like an absolute dream for traveling or trips to the park. Just be prepared to hook into Wi-Fi from somewhere (even your phone), because the Steam Deck lacks cellular capabilities.