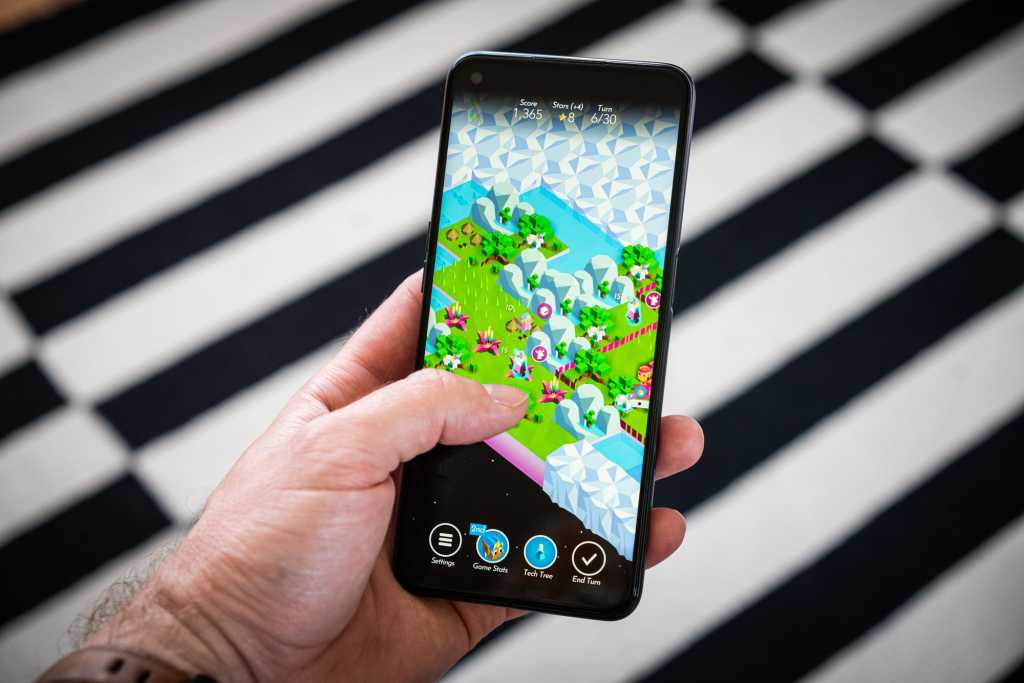 The OnePlus Nord N200 5G surprised me. It costs just $240, yet I can’t believe how many great features it shares with the OnePlus 9 Pro that costs almost four times as much. If you want fast 5G speeds and a great Android OS experience on a budget, then the N200 is worth a look.

The OnePlus Nord N200’s budget bones can be seen in the specs below. Don’t expect the highest-end processor, gobs of RAM, or a luscious AMOLED display, such as the OnePlus 9 Pro has. However, the N200 is still well-sized, fairly thin and light, and adequately equipped.

Over the last several years I’ve often recommended OnePlus phones to people looking for the best price/performance ratio. As someone who typically rocks the latest and greatest flagship that’s out there, I was nevertheless bracing myself, expecting OnePlus would give up too much in the pursuit of a lower price. Luckily, most of what I enjoy about the OnePlus 9 Pro remains in the Nord N200 5G.

One of the main selling points for OnePlus phones has been the company’s take on Android, called OxygenOS. It skillfully mixes the simplicity and ease of use found in Google Pixel phones with smart enhancements like what’s found in the wildly popular Samsung Galaxy devices. The N200 rocks the same great OxygenOS experience found on its more expensive siblings: a clean notification shade, easy-to-use swipe navigation, a well laid-out settings app, and so much more that I love.

Great physical features include the side fingerprint reader, which I like better than the under-screen implementation found in recent flagship Samsung Galaxy devices. The Nord N200’s screen features a nice 90Hz refresh rate for smoother scrolling action. I can’t go back to 60Hz, and I’m happy to find a fast display on a device this cheap.

I didn’t even come close to filling up the 54 usable gigabytes of internal storage, but if I did, the phone offers expandable storage via SD card. Factor in the headphone jack, and the N200 gives you two features you’d be hard-pressed to find on many flagship phones anymore.

Of course, this budget phone has some compromises. Battery life on its 5,000mAh pack was surprisingly inconsistent. Charging speeds top out at 18 watts, and there’s no fast-charging option either. The FHD+ IPS screen is decent when you’re looking straight at it, but it quickly looses its luster when off-angle. Stressing the phone with heavy tasks like playing games can bog it down. In fact, there is stuttering across the board when something intensive is happening in the background, like updating apps.

Probably the hardest part for me to swallow was the camera performance. Even though there is a triple lens setup around the back side, the configuration is not standard. You get a 13MP main lens and two 2MP ancillary lenses—one for macro work, one for monochrome shots. While the hardware may be comparable to the OnePlus 9 Pro’s, the processing on the Snapdragon 480 just can’t keep up. Real-time views on the device while you line up the shot are lower-res and not fully indicative of the photo you are about to take. To make matters worse, the lack of optical image stabilization (OIS) combined with a subpar electronic image stabilization (EIS) resulted in a couple of blurry photos in broad daylight.

When you stop to think about how many high-end features of yesteryear have made it down to a sub-$300 phone, it boggles my mind. I remember the first 90Hz screen I used on a high-end phone not too long ago, and now users with stricter budgets can enjoy some of the same great experiences.

So it doesn’t take the best photos, the screen isn’t knock-down gorgeous, and not as many apps stay in memory compared to $1,000+ phones. But why would you expect that? The OnePlus Nord N200 5G is worth considering for anyone who wants the fastest connectivity and one of the best Android OS experiences available. They can have it here—and still find plenty of money left in their wallet.