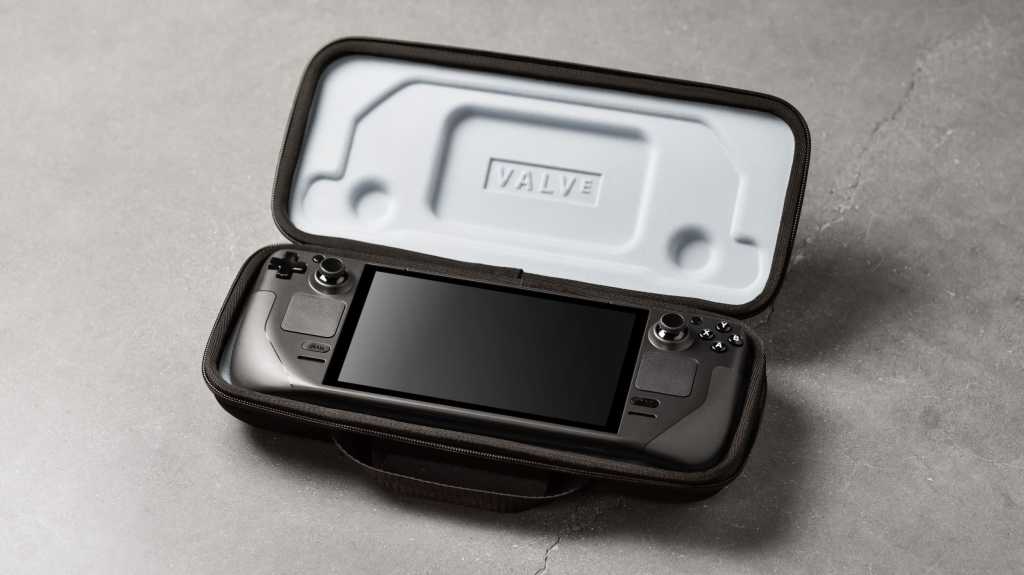 Looking at the spec sheet alone, the $399 Steam Deck gaming handheld should be a winner—and early Steam Deck reviews certainly suggest Valve nailed it on the hardware front. The PC-centric Nintendo Switch rival features a big 7-inch touchscreen, plenty of control inputs, an all-AMD chip based on the same hardware inside the Xbox Series S|X and PlayStation 5, and the ability to double as a full-fledged Linux PC. But forget the hardware. While it’s impressive indeed, the Steam Deck will sink or swim based on its software, and that means Valve awesome Proton technology is about to be thrust into the spotlight.

The Steam Deck will sprint to a larger software library than most gaming handhelds because you’ll be able to tap into decades of existing PC games through your Steam account, rather than having to wait for new releases made specifically for the fresh hardware. But most of those games were created for Windows, and the Steam Deck runs on Valve’s Linux-based SteamOS operating system instead. Proton (via Steam Play) lets Windows games run on Linux. It works very well much of the time, but it’s not perfect—and the Steam Deck’s success probably depends on just how much Valve can polish up Proton before the handheld’s February 25 launch. The best hardware in the world is only as good as the software that runs on it, after all.

Here’s a high-level look at what you need to know about Proton, the Steam Deck’s secret software sauce.

What is Steam Proton?

At a high level, Proton is a compatibility layer that allows Windows games to run on Linux-based operating systems (such as the Steam Deck’s SteamOS). In the past, playing PC games on Linux required you to run Steam games through software called Wine (an acronym for “Wine is not an emulator.”). Valve worked with CodeWeavers developers to build Proton as a fork of Wine, then baked the technology right into Steam itself as part of Steam Play, the company’s “buy once, play on any PC platform” endeavor.

Valve created Proton after its living room-focused Steam Machine initiative failed, partly because of their reliance on the much-smaller Linux gaming library. “There was always kind of this classic chicken and egg problem with the Steam Machine,” designer Scott Dalton told IGN. “That led us down this path of Proton, where now there’s all these games that actually run.”

If you’re interested in industry inside baseball, Proton and SteamOS also double as a potential escape hatch from Windows if Valve ever needs it.

How do you set up Steam Proton?

Currently, Steam for Linux does not flip on Proton by default. You need to manually enable it or stick to games that offer a native Linux port. Considering how few games offer native Linux versions, we’re strongly hoping Valve makes Proton/Steam Play enabled by default on the Steam Deck, or there will be a lot of unhappy customers.

If you’re already using Linux, you can turn on Proton by opening your Steam settings and clicking on the “Steam Play” option at the bottom of the navigation pane. (The option won’t be visible on Windows PCs.) There, you’ll see a box you can check to “Enable Steam Play for supported titles.” That turns on Proton for games confirmed to work well with the technology, added to a whitelist by Valve. You’ll also see an advanced option to “Enable Steam Play for all other titles,” which will flip on Proton for everything after you restart the client.

Will all my games work on Steam Deck with Proton?

Will all games work? That’s the million dollar question.

Valve has been steadily improving Proton ever since it launched in 2018, and many—most, even—Windows games run pretty well via Steam Play with little to no tinkering. Your best resource for determining how a game runs is the utterly fantastic ProtonDB, a community-made treasure trove of information that currently tracks almost 19,000 games, of which over 15,000 work on Linux. The site also maintains a very helpful troubleshooting FAQ for Proton games. (Be sure to leave reports of your own if you use Proton and Steam Play!)

As those numbers indicate, some games are just plain “borked” on Linux, to borrow ProtonDB’s term. The most common casualties? Sadly, the most popular games around—battle royale games and esports titles. Proton’s compatibility layer tweaks don’t play nice with the anti-cheat software deployed in widely played online games. Valve made sure to get its own Counter-Strike: Global Offensive and Team Fortress 2 running on Linux, but heavy hitters like PlayerUnknown’s Battlegrounds, New World, Apex Legends, and Destiny 2 still won’t run.

That’s a massive bummer, and as you can see from the ProtonDB stats about game compatibility above, it means that many of the most popular games in the world couldn’t be played on a Steam Deck currently. Epic recently stated it won’t work to support Fortnite on the Steam Deck either. (Notice how the percentage of red “borked” games in the top ten is much, much, much higher than in the top 100 and top 1000—that’s because those multiplayer games dominate the top-played charts.)

Valve understands what a huge roadblock this could be. While BattlEye and the Epic-owned Easy Anti-Cheat lacked Proton support whatsoever when the Steam Deck was announced, but Valve has worked with those developers to get the technology up and running on SteamOS. At the end of January 2022, in a Steam Deck Anti-Cheat Update, Valve declared that “Our team has been working with Epic on Easy Anti-Cheat + Proton support over the last few months, and we’re happy to announce that adding Steam Deck support to your existing EAC games is now a simple process, and doesn’t require updating game binaries, SDK versions, or integration of EOS. Alongside our BattlEye updates from last year, this means that the two largest anti-cheat services are now easily supported on Proton and Steam Deck.”

Developers still need to update their games to support the technologies on SteamOS, but with BattlEye and Easy Anti-Cheat now playing nice with Proton, the Steam Deck will launch with its biggest hurdle already cleared. That doesn’t mean everything is roses and sunshine though. As you see in the ProtonDB screenshot above, about 20 percent of the top 100 and 1000 games on Steam lack a Gold+ compatibility rating with Proton, and Linus Tech Tips noticed that Forza Horizon 5 suffered from some bizarre physics and lighting effects even when running at 60 frames per second. The vast majority of games run very well on Proton already, and that’s a monumental success for Valve and Linux gaming alike, but every hiccup and pain point could potentially be a deal-breaker for casual users enticed by the Steam Deck’s juicy $400 selling price.

All the appealing hardware and just-as-appealing prices won’t matter if PC gamers can’t play their favorite games on Valve’s handheld. As a general consumer device, the Steam Deck will live or die on the back on Proton—and whether Steam Play can indeed coax multiplayer developers into supporting it. Fingers crossed.

Editor’s note: This article originally published on July 16, but was updated to refer to subsequent Proton improvements and initial Steam Deck hardware reviews.