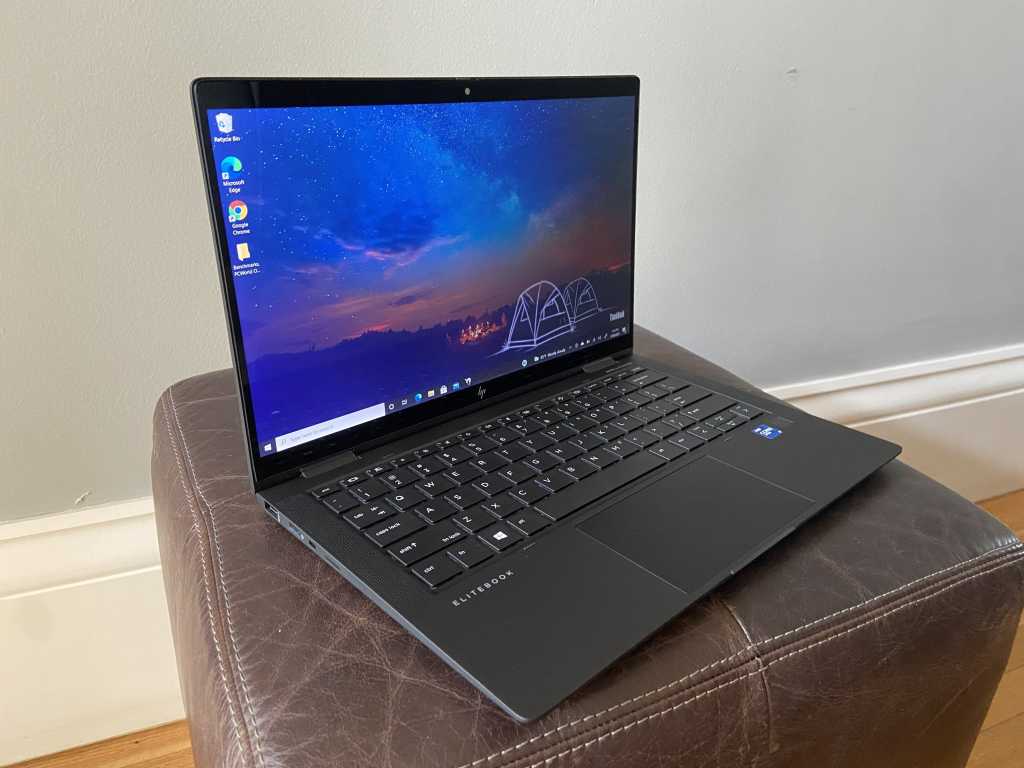 The HP Elite Dragonfly Max will turn heads with its gorgeous design, and its webcam will make you the envy of every Zoom call. The 13.3-inch display may be too small if you don’t travel like you used to, however, and you’ll get better battery life from competing premium business convertibles.

The HP Elite Dragonfly Max is designed for executives who are on Zoom calls as much as they are in in-person meetings. The Elite Dragonfly Max features a five-megapixel (1440p) webcam that offers twice the resolution of the standard 720p laptop webcam, and it’s flanked by four microphones for better Zoom audio.

Given that it could be years before you return to pre-pandemic travel levels, I question HP’s decision to outfit the Elite Dragonfly Max with a 13.3-inch display instead of a roomier 14-inch panel. Then there’s the price: It’s sky-high at $2,789 on HP.com. It competes well in most ways with other premium business convertibles, but for that price the raw CPU performance and battery life are surprising disappointments.

Based on its specifications, the HP Elite Dragonfly Max model we reviewed has a top-end CPU, ample RAM, sufficient solid-state storage capacity, and abundant connectivity. Here are the details:

Our $2,789 Elite Dragonfly Max is the top-end unit in the line. You can save $550 by opting for the $2,239 baseline Elite Dragonfly MaxRemove non-product link, which features a Core i7-1165G7 CPU (which has slightly lower clock speeds than its higher-end Core i7-1185G7 sibling) but otherwise the exact same configuration. These fixed-configuration models move in and out of stock, but the customizable Elite Dragonfly Max, starting at $2,409 on HP.comRemove non-product link, is another option. With it, you can expand the memory to 32GB and the storage up to a 2TB SSD, and opt for mobile broadband. All models feature the same 13.3-inch, Full HD (1920×1080), touchscreen display with HP’s Sure View privacy feature.

The HP Elite Dragonfly Max oozes C-suite style with a thin, yet rugged magnesium chassis finished in an alluring matte black. It’s sure to turn heads in the boardroom or business-class section of an airplane. It’s also rugged: The Dragonfly Max passed MIL-STD 810H tests to prove its durability against shock, heat, cold, humidity, and other extreme conditions.

The smooth, matte finish is also effective in repelling fingerprints and smudges. Should you want to wipe down the system, the Dragonfly Max is designed to be wiped down 1,000 times (per HP) without staining or fading. That’s more than 19 years of wipes on a once-per-week schedule. The laptop includes a utility—HP Easy Clean—that disables the touchscreen, keyboard, and touchpad for two minutes so you can wipe down the machine without causing wacky input errors.

There are other handy utilities on board. HP Sure View can be toggled on with the press of a function key to keep prying eyes from seeing the contents of your screen—it makes it nearly impossible to see the display unless you are seated directly in front of it. Another utility lowers the temperature of the laptop when it’s on your lap, sacrificing a bit in performance to avoid scorching your thighs. The Dragonfly Max also reduces battery usage when it senses it’s been put in a bag, and speeds up the wake-up time when you take it out.

Weighing only 2.59 pounds, the Dragonfly Max is an easy travel companion. Compared to other premium business laptops, the Dell XPS 13 2-in-1 9310 weighs 2.9 pounds and the larger 14-inch HP Spectre x360 14 weighs 3 pounds. The smaller 12.3-inch Microsoft Surface Pro 7+ with the Signature cover/keyboard is only slightly lighter at 2.42 pounds. If you are willing to sacrifice 2-in-1 versatility, the 13-inch Lenovo ThinkPad X1 Nano weighs a mere 1.99 pounds.

The Elite Dragonfly Max’s 13.3-inch, Full-HD touch display is most remarkable for its brightness rating of an astonishing 1,000 nits. While in a side-by-side comparison it didn’t appear any brighter with Sure View disabled than the 500-nit display on my MacBook Pro, it’s nevertheless one of the few displays I’ve experienced that can be viewed easily in direct sunlight. You should note, however, that enabling Sure View greatly dims the display.

At any setting, the display’s colors appeared vivid, with deep blacks and bright whites. Its HP Eye Ease feature reduces blue light, and does so without adding the yellowish tint that you’ve seen in other solutions. Eye Ease is always on and can’t be disabled, not that you’d want to. After using the Dragonfly Max for a week, my MacBook Pro’s screen looked cold and blue by comparison.

My only complaint about the display is its size. At 13.3 inches, with a 16:9 aspect ratio, the display starts to feel cramped, especially if you’re trying to scroll a large spreadsheet or document. I’d happily carry around a few more ounces for a 14-inch display.

The Elite Dragonfly Max is well equipped for the videoconferencing era. The five-megapixel webcam above the display can record 1440p video at 30 frames per second. With twice the resolution of the 720p webcams found on nearly every other laptop, the video it captured was outstanding, with accurate skin tones and colors, and little noise or graininess. There’s also a physical privacy cover. Video calls sound clearer, thanks to the laptop’s four microphones—two front-facing and two world-facing.

Who needs passwords when the Elite Dragonfly Max offers biometric options? There’s a separate IR camera for Windows Hello face recognition. (The privacy cover also blocks the IR camera, so you’ll need to open it to use this feature.) Alternatively, you could use the fingerprint reader located below the lower-right corner of the keyboard.

The laptop’s four speakers—two that fire upward on either side of the keyboard, two that fire from the front edge of the bottom panel—provide excellent audio output for such a compact laptop. The full sound exhibits clear highs and mids and something resembling a bass response—rare for any laptop.

The keyboard and touchpad are both stellar. The keys offer a firm response with the right amount of travel, and they’re very quiet when pressed. The typing experience is aided by the rigid, magnesium chassis, which does not flex, even under heavy-duty typiing. The keyboard features two levels of backlighting, and there’s a mic mute button among the Fn keys that helpfully shines a small LED when you are muted. Given its focus on videoconferencing, however, I was surprised to find no dedicated Fn keys to start and end calls. The touchpad was accurate in recording my mousing gesture and offered firm clicks, and its matte finish made for smooth gliding, even during a humid July’s week of testing.

The highlights of the Dragonfly Max’s port selection are its pair of Thunderbolt 4 ports, but I wish they were split across each side of the laptop instead of both located on the right edge. I’d also move the USB Type-A port from the left edge to the right, because it’ll likely be used to connect a mouse, and most people are right-handed mousers.

In our testing, it was the best of times and it was the worst of times for the Elite Dragonfly Max. It turned in excellent application performance, but it exhibited lackluster multimedia capabilities and battery life.

We compared the Elite Dragonfly Max against two other high-end 2-in-1 convertibles,  the Dell XPS 13 2-in-1 9310 and the HP Spectre x360 14, each of which features the Core i7-1165G7 CPU; and Microsoft’s Surface Pro 7+, a 2-in-1 with detachable keyboard, which uses a Core i5-1135G7 CPU. The Lenovo ThinkPad X1 Nano is based on the Core i7-1160G7 CPU; it’s not a convertible, but it’s a similarly sized premium business laptop well worth considering. All five systems feature 16GB of RAM and integrated Intel Iris Xe graphics.

Our first benchmark is PCMark 10, which measures performance on everyday computing work including office productivity tasks, web browsing, and video chats. It’s a close race—pretty much any modern laptop can handle mainstream applications with ease—but to its credit, the Elite Dragonfly Max finished first among the five premium business machines here.

The story changes when you look at purer CPU performance. We first look at Cinebench, a sort of CPU sprint. The Elite Dragonfly Max’s numbers aren’t bad, but they trail those of similar competition by a significant margin.

We use the HandBrake utility to convert a 30GB movie to Android table format, an intensive task that taxes the CPU—and the laptop’s ability to keep it cool. Here, again, the Elite Dragonfly Max trailed the competition.

The Elite Dragonfly Max is not the first thin, light, and small laptop to falter on CPU performance because of thermal constraints. However, it’s worth noting that the Dell XPS 13 9310 2-in-1, the most similar machine in our comparison, blows it out of the water on both tests.

Although Intel’s Iris Xe integrated graphics is surprisingly good, as our tests have shown, none of the Iris Xe-equipped laptops here will be confused with gaming machines, especially the Elite Dragonfly Max, which brought up the rear on our 3DMark benchmark.

While some of the lackluster performance above can be chalked up to the limitations of smaller laptops, the battery life is the biggest disappointment. We test laptop battery life by looping a 4K video using the stock Windows Movies & TV app, with screen brightness set to about 250 nits and the volume dialed to 50 percent, with headphones plugged in.

It may seem harsh to ding a laptop that ran for nearly 11 hours on battery, but consider the competition. Sure, the Elite Dragonfly Max, with a 56Wh battery, outlasted the Surface Pro 7+ and its 50Wh pack. But the Dell XPS 13 9310 2-in-1 has a 51Wh battery, and the Lenovo ThinkPad X1 Nano has a 48Wh battery, yet both lasted longer than the Elite Dragonfly Max. (The HP Spectre x360 14 has an outsize advantage with its 66.5Wh supply.). You’ll be able to get through all but the longest workdays on a single charge with the Dragonfly Max, but competing models seem to be more efficient.

The HP Elite Dragonfly Max boasts a beautiful, rugged enclosure and a host of thoughtful utilities that business execs are certain to enjoy. It also supplies a gorgeous (if small) display, surprisingly robust audio output, and a 1440p webcam that puts 720p cams to shame. Its first-rate design and long list of features help to justify its lofty price, but its performance on the whole left us wanting. Even a mild disappointment is noteworthy when a laptop’s price approaches the $3,000 mark.